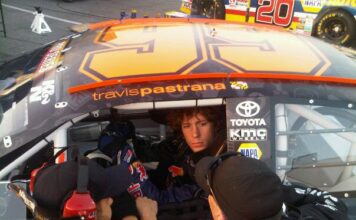 When the announcement was made that 11-time X Games gold medalist and four-time Rally Car national champion Travis Pastrana would be coming to NASCAR in 2011, the news came as a breath of fresh air during a time when attendance was down and the biggest decline was found between the ages of 18-34. NASCAR had already lured Metal Mulisha star Brian Deegan, who competed in the NASCAR Whelan series driving a Bob Newberry NTS Motorsports prepared super late model. [/media-credit]Deegan competed in three races on Toyota Speedway at Irwindale’s half mile in 2010 with a best finish of 10th. Team owner Bob Newberry said that, “NASCAR will be energized by both new fans and new sponsors that Deegan and Metal Mulisha (Deegan Motocross team, clothing and product line) will attract.”

Attract, is the direction that NASCAR is taking by bringing both Deegan and Pastrana, along with AMA Supercross champion Ricky Carmichael into the sport in hopes of attracting the younger extreme motorsports fans.

Carmichael competed in the 2009 Toyota All-Star Showdown, which is dubbed the “Daytona 500 of short track racing,” finishing 34th after starting 28th on the grid because of an accident on lap 142. Pastrana took a different approach then what Deegan and Carmichael did, by teaming up with NASCAR’s Michael Waltrip to form Pastrana-Waltrip racing.

Pastrana, talked about the opportunity to team up with Waltrip during his recent practice session, in preparation for his first official NASCAR start in next weekend’s All-Star Showdown. “I’ve looked up to Michael a lot. His whole business philosophy is like mine,” said Pastrana who took his first practice laps in a Waltrip Racing prepared K&N Pro Series Toyota Camry.

Pastrana also added that, “We are in it for the long haul I realize its gonna be a long and tough road. We need to figure out what we need to work on and where we are as the season progresses.”

Pastrana finished with, “The 2011 season get my feet wet see where we need to go and make the best of it. The team is looking at long term goals. We have the right people in place for us to get the first race in to see where we sit and make a game plan.” Waltrip was not at the track for the practice session, but will be at the race serving as the Grand Marshal for the eighth running of this prestigious event.

The anticipation of getting the chance to race in the NASCAR series is in its final stages for the sports newest up and coming star, with Pastrana ready to take on the challenge of racing against some of the series best short track racers. Last season’s K&N Pro West Series champion Eric Holmes said that, “Irwindale is a tough track to learn on, but Travis has some good people behind him that are teaching him.”

Pastrana was able to keep the car off the wall, and going in straight line during his first few laps on a somewhat cold night, which will probably be the same weather conditions the area will see for the feature event.

“It felt okay a lot flatter course then the other tracks I’ve tested at. I just want to get out there and start driving. The team put me with the best crew everything is in place for me to do well.” said Pastrana after coming in to make some adjustments on the car.

Pastrana also added that, “This is gonna take a lot of time. I look forward to it I can’t tell you what it’s like because I never done it. Bottom line we have high expectations but we need results first.”

Pastrana’s first start will not come easy since he will first have to qualify his No.99 Toyota Camry, against more experienced drivers who are still looking to keep their rides for the 2011 season.

“Qualify and then don’t crash. Get as much time as possible in the car to see where our foundation our base place is gonna be, “said Pastrana when talking about next weekend’s outlook.

Pastrana is scheduled to possibly compete in seven Nationwide races, along with some K&N Pro Series East and West races with the showdown being the first, and a target date sometime in August for the NNS.

“After the showdown get back and regroup and think about what we need to do are gonna do. We will do the NNS series midway through the season and get as many K&N East and West series race in. August is a possible target date for the NNS,” said Pastrana when talking about his long range goals.

The All-Star showdown is non-points event which is the premier event of the season, since both the K&N Pro Series East and West drivers are invited to participate. “Year in and year out, the NASCAR Toyota All-Star Showdown has provided some of the best racing action of the season,” said Bob DeFazio, Toyota Speedway at Irwindale track operator.

DeFazio finished with, “Last year’s sell-out crowd at the Toyota Speedway at Irwindale witnessed a race they will be talking about for years, and we are honored to once again host the pinnacle of short-track racing in NASCAR.

“Toyota Speedway’s graduated banking and multiple racing grooves are a perfect place to showcase this tremendous pool of talent in NASCAR. This event is a perfect way to give race fans a final send-off to the 2010 racing season and whet their appetite for more exciting racing in 2011.”