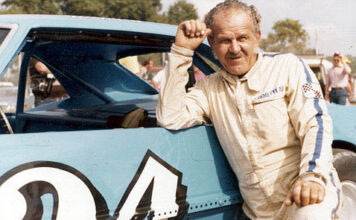 Wendell Oliver Scott, born in 1921 in Danville, Virginia, was an American stock car driver and a pioneer of NASCAR.  On March 4, 1961 in Spartanburg SC, he broke down racial barriers to make his first start in the NASCAR Grand National (now Sprint Cup) division.  Scott went on to become the first and to date, the only, African-American to win a NASCAR Sprint Cup event.

A look into his life gives us insight into a tumultuous part of NASCAR and American history.

Scott didn’t know what he wanted to do with his life but was sure of one thing. Whatever it was, he would be his own boss.

As a youngster he loved going fast, racing his bicycles against other kids and speeding around town on roller skates. Scott also grew up learning about cars at his father’s side. His Dad worked as a driver and mechanic for two wealthy white families and was well known for his prowess behind the wheel.

Eventually Scott quit high school, became a taxi driver and later served in the segregated Army in Europe during World War II. After the war, he ran an auto-repair shop and ran moonshine on the side.

Like others before him, he used the moonshine business to hone his driving skills and learn how to build fast race cars. Scott was only caught once and was sentenced to three years probation but continued to make whiskey runs.

On May 23, 1952, a set of unusual circumstances gave Scott his first racing start.

At that time the races in Danville were run by the Dixie Circuit, a competing organization to NASCAR.  In order to bring in more money, they decided that they needed a gimmick. Their idea was to bring in a black driver who was fast enough to compete with the usual white drivers. They chose Wendell Scott.

That first race wasn’t a success. His car broke down and many spectators booed him. But at that moment, Scott realized this was what he wanted to do with the rest of his life.

The next day brought Scott back down to earth. He repaired his car and decided to tow it to a NASCAR-sanctioned race in Winston-Salem, North Carolina. The NASCAR officials refused to let him compete telling him that black drivers weren’t allowed.

He left the race with tears in his eyes but he didn’t quit.

A few days later he went to another NASCAR event in High Point, North Carolina but was once again told he couldn’t race. They suggested he get a white boy to drive his car.

Instead, he left the track and decided to avoid NASCAR races for the time being.

He raced with the Dixie Circuit and at other non-NASCAR speedways and won his first race at Lynchburg, Virginia, only twelve days into his racing career.

As time passed, he still got boos but more and more fans began rooting for him. Although some of the drivers were prejudiced and would wreck him deliberately, many drivers came to respect Scott. They saw him as a driver no different from themselves, just another hard-working guy who loved racing.

Soon, some of the newspapers began writing positive stories about Scott and his popularity increased.

Scott understood, though, that in order to really succeed in the sport, he had to gain admission to NASCAR. He didn’t know NASCAR founder and president, Bill France, so Scott found a less direct way to get into NASCAR.

He towed his racecar to a local NASCAR event at Richmond Speedway and asked the steward, Mike Poston, to grant him a NASCAR license. Poston was only a part-timer in NASCAR but he did have the authority to issue licenses.

Poston told him, “We’ve never had any black drivers, and you’re going to be knocked around.”

Scott finally met Bill France for the first time in April of 1954. The night before they met, the promoter at a NASCAR event in Raleigh, North Carolina, had given gas money to all of the white drivers who came to the track but had refused to pay Scott. Scott approached France at the Lynchburg speedway and told him what had happened.

France immediately reached into his pocket, gave Scott thirty dollars and assured him that NASCAR would never treat him with prejudice.

In 1961, Scott moved up to the NASCAR Grand National division.

On December 1, 1963, driving a Chevrolet Bel Air purchased from Ned Jarrett, he won his first race at Speedway Park in Jacksonville, Florida — the first and only top level NASCAR event won by an African-American.

Scott didn’t have enough cash in his pocket to make the long trip. So he asked Jarrett if he could borrow $500.00.

“But he was having a tough time because of his race at that particular period. He wasn’t going to get a lot of help. I thought he was a good race-car driver and he could be good for the sport.”

Wendell had won the race, by two laps over Buck Baker, but it wasn’t without controversy. NASCAR waved the checkered flag over Baker and awarded him the trophy.

Hours later, NASCAR officials admitted that Scott had won the race. They gave him a trophy about a month later in Savannah, but it wasn’t the real thing.

Buck got the real trophy.

He continued to race competitively through the rest of the 1960s but was forced to retire due to injuries from a racing accident at Talladega, Alabama in 1973.

He died Dec. 22, 1990, after a long battle with spinal cancer.  In 1999, Scott was inducted into the International Motorsports Hall of Fame.

“When Ned Jarrett and all of those old drivers came to Scott’s funeral, they told us he had the respect of all the drivers. I’d say all of those older guys learned to like him and respect him. They knew he was a genuine person and he stood for what he believed. He didn’t give up.”

It has been 50 years since Scott’s first race in NASCAR’s premier series. His achievements will be honored on ESPN on February 20th with a movie entitled “Wendell Scott: A Race Story.”

The film will air at 9 p.m. ET shortly after the 53rd running of the Daytona 500 race. It was produced by the Emmy Award-winning NASCAR Media Group in conjunction with ESPN Films and Max Siegel Inc.

The docudrama will contain seldom seen historical footage plus interviews from members of Scott’s family and memories shared by some of stock car racing’s past legends.

“Wendell Scott faced overwhelming challenges throughout his life and as a pioneer in his sport,” said John Dahl, executive producer, ESPN Films. “The film captures his strong sense of determination and honor with a poignant look at his struggles as well as an examination of his legacy.”

Scott will always be remembered as the man who prepared the way for future generations of minorities in stock car racing.

But what we should never forget is this. Wendell Scott was at heart simply a racer.

All he wanted was a chance to prove himself out on the track. The real testament to his success is that he did just that and earned the respect of the other drivers in the process.

1963 – The first and only African-American to win a NASCAR Sprint Cup event.

1999 – Inducted into the International Motorsports Hall of Fame

2000 – Inducted into the National Motorsports Press Association Hall of Fame

Thanks to Brian Donovan – “Hard Driving: The American Odyssey of NASCAR’s First Black Driver” and NASCAR for quotes.

Angela Campbell
A native of Charlotte, NC, Angela (Angie) was first introduced to racing by her father. An avid fan of NASCAR, she found a way to combine her love of racing with her passion for writing. Angie is also an award-winning member of the National Motorsports Press Association. Follow her on Twitter @angiecampbell_ for the latest NASCAR news and feature stories.
Previous articleCasey Wyatt Integral Part of Extreme Makeover Home Edition
Next articleNew Sprint Team Headed to Daytona