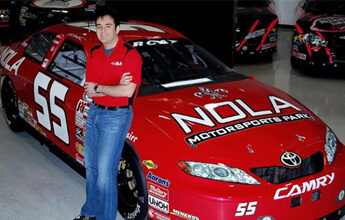 [/media-credit]Hal Martin Announced that NOLA Motorsports Park would adorn the sides of his No. 55 Venturini Motrsports Toyota for the Lucas Oil Slick Mist 200 at Daytona International Speedway on Saturday.

“I’ve done a lot of preparation coming into this race – it’s the most important race of the year,” Martin said in a press release. “I couldn’t ask for a better fit for sponsorship, because NOLA Motorsports Park is an up-and-coming race track in my local area. I’m an up and coming driver in the ARCA (Racing) Series, and I look to prove that even more on the track. We had a very successful team outing at the test in January, and I’m confident that we made the right setup changes with the small details to make us strong. Competition is going to be heavy – so I’m ready to roll with NOLA Motorsports Park and the signature ‘Speed De Lis’ on the hood!”

“What a talent Hal Martin is,” said Mitch Wright, general manager of NOLA Motorsports Park. “We’re so excited to be able to support a local Louisiana racer with his caliber of talent. It’s a rare thing – you can count the number of successful drivers on one hand from our area. That’s what makes it special, and it also lends a great spotlight to what we’re trying to do, which is also rare. Bringing the longest road course in North America, as well as elite-style racing to families in greater New Orleans and Louisiana as a whole, is also something that is special.”

For now, Martin is focused on the upcoming race at Daytona and being ready for it. He was quick during test, in the top five all three days, and has been working out to be ready for Daytona.

“I’ve been doing a lot of prep work in general, getting ready for Daytona,” Martin told the ARCA Racing Network. “My workout routine has included a lot of endurance training to simulate the grueling weight this type of race can have on my body.  I’ve also done a lot of weight training.  Studying old ARCA races for the draft has helped too  – as an engineer, I’m hyper specific on my lines and my efficiency.  The computer simulator has also become my best friend – running Daytona and Talladega to get used to running in the big packs again.  I just can’t wait to get on track and hammer down.”

If Martin could pull off the win, it’d be the first win for Venturini Motorsports at Daytona, despite how strong their cars have been.

“We have finished second in everything they have in Daytona Beach,” said Billy Venturini. “We have not won hardly anything, but we have finished second. If they had a potato sack race, we would finish second in the thing. Every year we have run well, and over the last few years we have gained the reputation for the best superspeedway program. It is time, which this year we capitalize and win.”