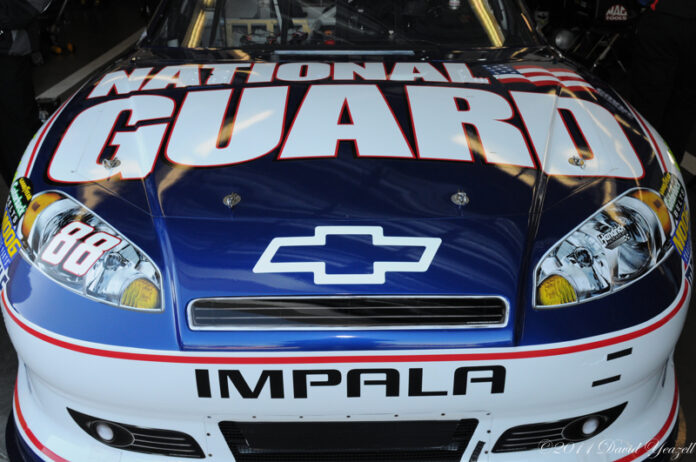 Lately it seemed when Dale Earnhardt Jr. went to pick his spot, he’d always get a crappy starting position – like 20th. This year was different as he drew the pole for Saturday night’s Budweiser Shootout at the Draw Party. [/media-credit]”I’ve been in this race a lot and I’ve never started from the pole,” he said. “Hopefully I can find out who starts third and am good friends with them.”

Before he peeled his label off, he predicted it’d to be first.

“You knew it, didn’t you?” Kenny Wallace asked him.

Sporting a clean look this year instead of the beard, Earnhardt cited it being due to the sponsors not allowing it.

“My sister got smart and has photo shoots every three weeks so I can’t grow it,” he said.

Starting on the outside of the front row will be one of Earnhardt’s best drafting partners in the past – Tony Stewart. Instead of his starting position being talked about the most, the talk surrounded his incident in Australia, where he stated that he didn’t hit the guy with the helmet like rumor said, and him losing weight.

“You know you’re famous when the biggest story of the winter time is Tony loses weight,” Kenny commented.

“Its kind of scary when one guy talks about another guy’s weight,” Stewart said near the end of their conversation. “If I didn’t know your wife, I’d be scared.”

Drawing the fourth spot was Denny Hamlin, who was quite content with what he got.

“Actually, wouldn’t want to be anywhere else,” Hamlin said.

After coming so close last year, Hamlin comes into the new season ready to challenge, with new backing from Michael Jordan.

“Its a good business deal for the both of us,” he said, of the deal. “Its a big deal for myself to be the first Jordan branded athlete in racing.”

The fifth starting spot came to equal irony as it would be Kasey Kahne, who is set to drive that number in 2012.

“I think we’re going to learn a lot for the duels and the 500 next week,” Kahne said.

While the focus was on determining where everybody would start, the discussions were a little all over the place as Kenny Wallace and Steve Byrns hosted the event.

Kyle Busch, who will start 21st, spoke off his wedding to Samantha that took place on New Year’s Eve in Chicago.

“I do got some extra weight on my hand, but we’re drinking strictly bottled water as there’s lots going on here,” he joked. “We both had a great time. The wedding was awesome. We had a wonderful opportunity to get our friends out there to celebrate – 300 of them.”

Jeff Burton and Jeff Gordon joked about their little feud that they had at Texas.

“Ah yeah, we’re buddies,” Gordon responded when Wallace asked him if they spent thanksgiving together. “We’ve been hanging out all off-season long……..I think its funny how every place we go, they put us next to each other to try to start something.”

“My daughter said when I got home, she said she’d kick his ass,” Burton said.

They will start the Budweiser Shootout near each other as Gordon got 12th while Burton got 15th.

Besides the feud, Burton also spoke of the busy off-season he had.

“We did a lot of racing, more racing than normal,” Burton said. “I’m a car owner and I’m a crew chief.”

20th may not be the number that must drivers want, but Mark Martin was plenty happy with it.

“I got some great race fans and one of my fanss said to get this one,” he said. “This is just where I wanted to start so this is no problem.”

Last year’s Daytona 500 winner Jamie McMurray said that last year was a really good year for him and he spent the off-season with his new baby, Carter.

“We had a baby – on Thanksgiving day,” he said, before choosing 14th. “We’ve had a really good off-season. it was nice that we had carter right when the season was over so we got to stay with him.”

Kevin Harvick, who is going for his third Budweiser Shootout in a row, spoke of his latest experiences with Budweiser.

“I went with Budweiser and anywhere you go with Budweiser, you can’t help but have a good time,” he said before drawing 18th. “I got to go the Superbowl, NHL All-Star game and drink beer. We got to go to the headquarters in St. Louis and got to drank really good beer.”

To see more articles by Ashley McCubbin and live updates from the weekend, check out http://newsfromthepits.blogspot.com/