What?! Tony Stewart Has a Girlfriend…Say It Ain’t So! 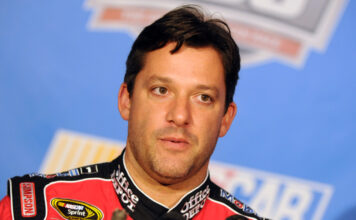 [/media-credit]It’s just days away from the 53rd running of the Daytona 500. Finally, after three long months NASCAR fans have something with a little substance to talk about; but forget all the hype of who is sitting on the pole, all of those crazy conspiracy theories and speeds reaching upward of 206 MPH during last weekend’s Budweiser Shootout and focus on something that really matters…Tony Stewart’s love life.

Like a dog whistle blowing in the wind, Stewart’s lady fans instantly stopped what they were doing, cocked their heads to the side to ensure proper processing of what they were hearing and then promptly freaked the hell out!

I know this because suddenly my Facebook, Twitter and cell phone blew up with messages and texts in an outrage over the news.  It was like animal instinct Armageddon. You would have thought that the nation was under attack again based solely on the intensity of how fast my social networks were working; instead it was just poor Jessica who was taking the brunt of the terrorist attacks.

Naturally, in an attempt to write something factual and well researched, I Googled my subjects. In my quest to search of the real truth behind the vicious rumor, I stumbled upon a website dedicated to the brutal dissection of Stewart’s private life.  Sweet Jesus, it was like striking gold! How did I go so long as a NASCAR fan without realizing that sites like this actually exist? Does every driver have one?

It was like hot buttered bliss drizzled atop a train wreck.  It was cat calling at it’s finest from a bunch of house fraus that would never in a million years be able to snag themselves their own Tony Stewart, but by-god they can dream can’t they and once they realize that the glass slipper will never fit their own foot, they do what they do best, talk some smack until it makes them feel better about their own lives.

Ladies, are you really that surprised? This can’t possibly be the first time that you have heard her name romantically linked to Stewart. In 2009, she was photographed multiple times on pit road and in Victory Circle at Watkins Glen, a spot traditionally held for the driver’s wives or girlfriends.

That same year I ran into her while covering a race on the east coast. I was heading into an infield bathroom that is primarily used by media, track employees, drivers and their crews, along with their families and friends while Ms. Zemken was heading out. When I say ran into her, I mean I literally ran into her. I was the victim of an accidental “motor boating,” not sure what that term means? Google it, I promise it will not disappoint! While I can say that I do admire a good pair of chest cushions when I see one, my face had no business being in between them! Talk about your awkward situations, but let’s just say for the record that Tony is a very lucky man!

Look, who am I to judge anyone? I’m okay with a little harmless trash talking now and again, because somewhere, someone is talking smack about me, we are all fair game when it comes to scrutinizing and I admit that I enjoyed reading some of the posts on this bitchy blog, it was a good laugh, but before you go judging a pretty blond by her cover, open the book and flip through a couple pages and you’ll find that this one has a good storyline as well.

Zemken may look like a living Barbie, but she grew up with racing in her blood. Her father Ray was a DIRT modified racer who spawned Jessica’s passion for driving.  She began racing on the go-kart track at the age of eight and with over 100 victories in that genre, set her sights on modified sprint cars just prior to her high school graduation.

Realizing at an early age that nothing comes easy and if you want it done right, then do it yourself. At the age of 17 she assembled her own race team and won the 2004 Utica-Rome Speedway Track Championship (located in Central N.Y.).

The following year she was competitively kicking ass and taking names. In 2010 she completed her first year as a driver with Tony Stewart Racing as a “true outlaw,” competing in 410 and 360 sprint car races, including stints in the World of Outlaws and All Star Circuit of Champions. The girl has a couple other assets under her fire suit, not just the obvious ones.

Alright, alright…I know that you don’t always want the meat because you’re too distracted by the potatoes and sadly this is one of those cases where others will overlook true attributes for the analyzing of the cosmetic appeal.

Beauty is in the eye of the beholder and if your driver is happy, can’t you just be happy for him? Maybe you should take a step back and give your own lives a little attention and stop playing the “Bitter, party of one” card.

The truth of the matter is that no one would ever be good enough for “your man” unless it were you. Am I right? We cut down others in order to make ourselves feel better, it is a glorious little savior at times, but some have turned it into a destruction filled art form. It has become a habit or hobby if you will to talk hurtful gibberish, add to that the veil of anonymity that the Internet provides and it becomes a cesspool for like-minded behavior.

Who has that kind of time? Not this girl and if I did, I would certainly be spending it on more valuable and rewarding activities, like writing about you! If I had a sassy little emoticon, I’d insert it right here. Probably that cute little winking smiley face that says “just kidding y’all,” or am I?

We are NASCAR fans ladies and to read that if you will “no longer buy” No. 14 swag or are setting your sights on another, more romantically available driver just because you hate who your driver has chosen as a mate is downright embarrassing to the rest of us!

Just know that I’ll still be wearing my Smoke gear proudly and will delight in the satisfaction of knowing that his soft cottony touch be all over me and not you. Scandalous isn’t it? See you on the message boards! (Insert big toothy smiley grin emoticon here.)