AJ Allmendinger Reflects on the Duels, Daytona 500, and Earnhardt’s Legacy 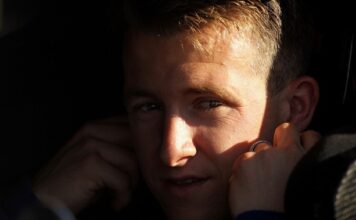 A J Allmendinger, still battling flu-like symptoms which he has experienced most of the weekend, took a moment outside his motor home to reflect on his Gatorade Duel race, the upcoming Daytona 500, and the tenth anniversary of the death of Dale Earnhardt. [/media-credit]”The day of the duel race was better than I thought,” Allmendinger said.  “When I woke up, I didn’t think I was racing because I was so sick.”

Allmendinger credits the “kind ladies of the medical center” with getting him back in shape enough to race.  “They gave me some fluids and gave me some IVs,” Allmendinger said.  “That got me through the day.”

Getting through the day and not crashing his car was Allmendinger’s major focus during his duel race.

“Overall, I thought it was OK,” Allmendinger said.  “First things first, we didn’t wreck the car. You don’t want to wreck your primary in the duels when really all it means is starting position.”

“I felt like we had a chance to win the race,” Allmendinger continued.  “Me and Jimmie (Johnson) got hooked up and anytime you get hooked up with a five-time champ, you hopefully make friends.  I thought we worked really well together.”

“There is a couple of things that we need to work on a little bit,” Allmendinger said. “Overall I thought it was good and we put ourselves in position to at least have a chance to win it.  Seventh isn’t terrible.”

“I feel like the Fords are working really hard on keeping the engines cool,” Allmendinger continued.  “Watching the second duel, we learned a few things we need to do.  But overall it was good.”

Allmendinger’s duel finish places him 13th in the running of Sunday’s Great American Race, the Daytona 500.  The Richard Petty Motorsports ace also acknowledges that with the two car tandem racing,  this years’ Daytona 500 will definitely be different from any others.

“I wouldn’t say it’s any better or worse.  It is just different,” Allmendinger said.  “In one way, it saves you from having to run three or four wide the whole race, which as a driver is a lot better.”

“Now it’s just strategy,” Allmendinger said. “You’ve got to find a friend and if you can find someone you can work with, you can consistently work with, I feel like maybe it’s easier to work with that one guy all race.”

Allmendinger admitted that going into Sunday’s race, he did not know who he might be working with, contrary to several other drivers who already have their plans in place.

“I think there may be some people who have already plotted out who they are going to work with,” Allmendinger said.  “But sometimes plans don’t work out.”

Allmendinger said that this definitely was the case in his Gatorade duel race, as he had planned to work with Mark Martin but instead got hooked up with Jimmie Johnson.  Martin, however, starts right behind Allmendinger in the Daytona 500, so he is hoping that some partnership will develop.

“Since Mark starts behind me in the 500, maybe there is some way we can hook up like we planned,” Allmendinger said.  “The quicker you find somebody that you work with and work well with, the better off you’ll be.”

Allmendinger admitted that not only has he been working on this new two-by-two style of racing in practice, but he has also been focusing on how to make the swap from lead car to pusher, or vice versa.

“Yes, that is something that I worked with in testing and all the practices,” Allmendinger said of the swap.  “I felt like that was something that me and Jimmie (Johnson) were really quick at.”

“But at the same point, you saw certain guys that didn’t have to change over,” Allmendinger said.  “That comes back to the cooling and having to figure out what we had to do to make our stuff cool even better.”

In addition to the partner racing and the swap, Allmendinger stated that it will be essential for all of the racers on the track for the Daytona 500 to respect the closing rates, as well as respecting each other.

“If they understand the closing rates and how big they are,  they give you room and understand this is the way we got to race, than it is OK and we run three-wide pushing each other,” Allmendinger said.  “It’s that one guy that tries to make the block and everything goes wrong.”

Along with every driver in the Daytona 500, Allmendinger will indeed be looking for his best dance partner.  He also hopes that he will get to work with his new teammate, Marcos Ambrose, in the No. 9 for Richard Petty Motorsports.

“Marcos (Ambrose) brings something new to the race team,” Allmendinger said.  “He’s really cool and he is fun to work with.  He definitely brings a different style.”

Unfortunately, Allmendinger’s Aussie teammate starts toward the back of the pack in the Daytona 500.  Ambrose will take the green flag in the 35th position.

Allmendinger also thinks that the key to the Daytona 500 will be making good decisions, in addition to finding the right partners with whom to dance.

“We just have to go out there and make good decisions,” Allmendinger said.  “Last year, we were really fast and I got spun and we had a bad finish because of it. “We just have to be smart.”

“Of course, we want to go out there and win the race,” Allmendinger continued. “But if we come out in the top 15, it’s a good weekend.”

As is everyone at the track this week, Allmendinger also reflected on the tenth anniversary of the death of NASCAR icon Dale Earnhardt.

“I never got to meet Dale but I grew up watching NASCAR and I remember that day,” Allmendinger said.  “I was at home watching the race with my parents.”

“When it happened, I knew it was a big deal,” Allmendinger continued.  “But at that point I was only racing go karts, so I really didn’t know the significance.”

“There have been a lot of good things that came about because of it,” Allmendinger acknowledged, noting the enhanced safety features in racing.  “But there is a huge void in the sport that honestly will probably never be filled.”

“I just wish I had the opportunity to meet him.  I think the coolest thing is the fact that he was always known as the Intimidator and that was his persona on the track.  But to hear all the stories about the things he did off the race track that were never in the press and that he did out of the kindness of his heart, just shows how cool the guy was.”  ”

“There’s not any more words you can say about what the sport is missing,” Allmendinger continued. “There are certain things that have been made better but they sure are overshadowed by how much he is missed being in the sport.”

“Hopefully, just like with any death, you celebrate the good things about the life and the good things that have come out of it,” Allmendinger said. “I just feel bad for Junior that he has to answer all the questions and live up to that.  Hopefully, we will put on a good race and have good things to remember.”