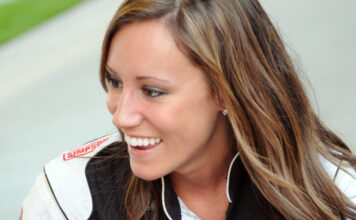 Kicking off her first official year as ambassador not only for Coors Light, the official beer of NASCAR, but for the sport itself, Rachel Rupert could not be more excited to be in Daytona for the first race of the season.

“I started out last year and had the ten races of the Chase,” Rupert said.  “So, that was really exciting and kind of got my foot in the door to see what my job was going to be about.”

[/media-credit]One of the primary functions of her role is to celebrate with the top qualifier for the Cup race, as Coors Light is the official sponsor of the pole award.

“Each week, the driver of the pole position receives the award,” Rupert said.  “And every Thursday evening, we have appearances at different bars around the track in celebration of the pole award.”

Miss Coors Light is not just busy on pole night, but is also on the move morning, noon and night throughout the race weekend, including appearances at the track and in the local area.

“I love doing the appearances,” Rupert said.  “It’s so  much fun.”  The only down side that she has currently identified is that often she is mistaken for a driver in her fire suit uniform.

At the track, Miss Coors Light’s major duty is mixing it up with the fans.  She poses for countless pictures with the fans, as well as encouraging fans to follow her on her Facebook page, www.facebook.com/misscoorslight.

Rupert got her gig as the spokesperson for Miss Coors Light after an intense audition, that not only tested her interaction with people but also her knowledge of the sport.  Lest anyone think Rupert is just a pretty face, she is in fact an absolute, die hard race fan.  In fact,  her father started taking her to races at the ripe old age of seven years and she has loved the sport ever since.

“My dad loves this sport,” Rupert said.  “When I was a little girl, we would watch the race every Sunday and he made me pay attention.”

“I knew I wanted to be involved in this sport,” Miss Coors Light said.  “So I started doing promotional work with an agency and that’s when they asked me to try out for this position.”

Rupert now invites her father to go to the track with her, which is he does, particularly at the tracks close to home.  Her role has also given her father access to special NASCAR experiences, which he would not have had otherwise.

“Being Miss Coors Light and having my job, it has opened a lot of doors,” Rupert said.  “So, I’m getting him experiences that he would have never dreamed of.  He is loving it.”

This weekend is especially important to Rupert and her family as her father was a huge Dale Earnhardt, Sr. fan.  While she would often devil him by claiming Jeff Gordon as her driver, Rupert said that both Dale Earnhardt, Sr. and Jr. have special places in her heart.

“That kind of breaks my heart,” Rupert said of the tenth anniversary this weekend of the loss of Earnhardt.  “It’s very touchy.  Ten years, that’s tough.”

“But Dale Jr. won the Coors Light Pole award so that was very emotional.”

[/media-credit]While Rupert considers herself blessed to have met so many of the drivers, including some of her favorites, it is the fans that really keep her going.

“I just love the fans,” Miss Coors Light said.  “Their passion is like no other sport.”

Unfortunately, sometimes the fans may just get a little too passionate.  One of the most common occupational hazards for her are marriage proposals, in addition to the occasional product being spilled on her at events.

“I get marriage proposals like you wouldn’t believe,” Rupert said.  “I’ve also been asked if I was the pot hole girl, from the GEICO commercial.”

Miss Coors Light is also not the only Miss in the garage area, including several Miss Sprint Cups, who also serve as ambassadors for the sport.

“We all get along so well,” Rupert said.  “We hang out outside of the track and since we are the girls in fire suits, we have to relate to each other.”

While she and the girls get along famously, enjoying their time at the track and with the fans, Rupert is also a self-proclaimed homebody.  In fact, she describes the perfect evening as being at home with her poodle Daisy curled up on the couch.

Rupert’s other major hobby, which many may find surprising, is fishing, which she loves to do in the Lake Norman area.

Whether at home or at the track, Miss Coors Light is most appreciative of her current assignment.  In fact, she states there is nothing else in the world she could imagine herself doing.