Surprising and Not Surprising: Daytona 500 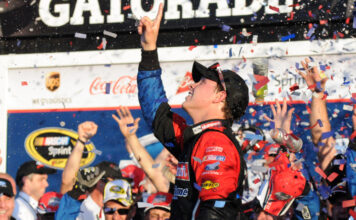 The kickoff race for NASCAR, the Daytona 500, is always one of the biggest and most prestigious races of the season. Here is what was surprising and not surprising from the 53rd running of the Great American Race, the Daytona 500: [/media-credit]Surprising:  In a race that set the record for lead changes, different leaders, and cautions, the biggest surprise to all, including himself, was Trevor Bayne, channeling his inner David Pearson in the famed Wood Brothers No. 21 car, to take the checkered flag.  Bayne is the second youngest race winner, accomplishing the feat on the second green, white, checkered, even while running low on gas.

Bayne is the tenth different Ford driver to win the Daytona 500.  This was the youngster’s first win in only his second Cup Series start.

Not Surprising:  Carl Edwards, exhibiting great patience, came in the second spot. Edwards, however, took solace in “how nice a guy Trevor is” as he savored his runner up status.

“I don’t know if you guys noticed, but it was pretty wild out there today,” Edwards said. “But I was there at the end and that’s what I had to do.”

Surprising: It was indeed surprising that there were no Hendrick Motorsports, Joe Gibbs Racing, or Richard Childress Racing representatives in the top five finishing order. The story instead was one of the underdog teams, with the Wood Brothers, Front Row Motorsports and JTG Daugherty instead in the top five.

Not Surprising:   Dale Earnhardt, Jr. had a great day, leading laps and staying competitive.  Unfortunately, as has happened to Junior all too often, he was caught up in a tussle on the final laps, pushing him back to a 24th place finish.

Surprising:   Incredibly surprising was the amount of deal making prior to the race, as well as throughout the race itself. Crew chiefs and spotters were exchanging frequency numbers, and probably cell phone numbers, in the garage area so that they could communicate and work together during the race.  Even on the spotter’s stand, it was “like the New York Stock Exchange,” according to Darrell Waltrip, with deals aplenty being made.

Not Surprising:  All of this deal-making seemed to wreak some degree of havoc on the track, including some tandem drivers causing each other to wreck. Some of the drivers, crew chiefs, and spotters seemed almost lax on their primary responsibilities as they focused instead on coordinating with other drivers and teams.

The best example of this confusion was a radio exchange between Kyle Busch and defending Daytona 500 champion Jamie McMurray, who thought they would be working together until McMurray remembered that he had a deal with his teammate Juan Pablo Montoya.

Surprising:  One of the biggest surprises was the expiration of Team Childress engines. Kevin Harvick was the first to lose his engine, early in the race on lap 22. At about lap 96, teammate Jeff Burton lost his engine.

“We had just a 10 to 15 more degree oil temp that what we have been running,” Harvick said. “We never blow motors. Everybody at ECR does a great job.”

“We are asking a lot out of the engines here for sure,” Burton said. “I am disappointed. Exceptionally disappointed. But I am really proud of everybody.”

Not Surprising:  Daytona, infamous for the big one, had one of course.  Early in the race on lap 29, Michael Waltrip, former Daytona 500 winner, got into the back of his teammate David Reutimann and the big one was on.  Fourteen cars were involved in the crash, including the three Hendrick cars of Jeff Gordon, Jimmie Johnson, and Mark Martin. Other drivers involved were Joe Nemechek, Andy Lally, Brian Vickers, Marcos Ambrose, Matt Kenseth, Greg Biffle, A J Allmendinger, and David Gilliland.

“Our chances to win the Daytona 500 are over,” Jeff Gordon said after the wreck. “It is such a bummer. We had such a fast race car, such a great race team.”

Surprising:  While it is the Daytona 500 and this is the first race of the season, the crowd on hand was healthy and the excitement in the air was palpable.  Hopefully the start is a harbinger for what is in store for NASCAR for the rest of the season.

Not Surprising:  Probably the most moving moment of the race occurred on lap 3, when the track went silent, except for the roar of the engines. The crowd stood as one, holding up three fingers in memory of the Intimidator.  There is no doubt Dale Earnhardt would have like that.