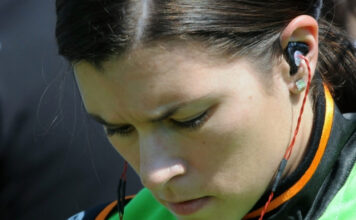 Danicamania is back!  JR Motorsports driver Danica Patrick started from a career-best qualifying position of fourth, and earned a career-best finish of 14th at the Drive4COPD 300 on Saturday. [/media-credit]Patrick managed to maintain a Top 10 position without a tandem drafting partner for the first quarter of the race.  She finally found a drafting partner in Clint Bowyer.  He propelled her past four cars to take the race lead on lap 31, making her the first woman to ever lead a NASCAR lap at Daytona.

When Bowyer’s engine became hot, Patrick bobbled her car and was unable to reconnect.  She then slipped to ninth place.  Bowyer, slipping even further to 18th, blamed Patrick’s spotter for poor communication.  Patrick admits that she wasn’t sure how to make pushing others work all that well yet.

In a spectacular finish, Tony Stewart went on to win the race by a narrow seven one thousands of a second margin over Bowyer.

Patrick, a lap down, was quite pleased with her first Top 15 finish.  “It was a good experience, there was a lot to learn and I did learn a lot,” she said.

Car owner Dale Earnhardt Jr., praised her run by saying ” I think she was just doing whatever she felt was necessary to get to the end of the race and see if she had a shot.  I think she did a good job.”

Patrick is scheduled to run a limited 14 race schedule for 2011.  Her next race will be at Phoenix Motor Speedway

SM Staff
Previous articleThe Wood Brothers – Last of a Breed and Winning Again
Next articleSpeed Weeks: A War of Attrition