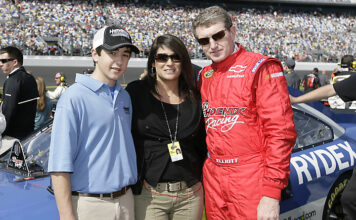 Cindy Elliott is doing what she does best, balancing talking about her life with NASCAR champion husband Bill and up and coming driver son Chase, while getting some exercise by taking a quick walk around the motor home lot.

“I don’t know that my life is any different than anyone else who has to balance life in general with work and being a mom,” Elliott said. “It’s just a balancing act and something we all do.”

Elliott does have two primary keys that have helped her be successful in her juggling act as wife, mom, and the Elliott family’s social media director.

“My tip for balancing is to stay as organized as you possibly can,” Elliott said. “I think organization and time management are key factors.”

The Elliotts have been married for 18 years and are going into their 19th year of wedded bliss. They met when Cindy Elliott, then a photo editor, had do do a shoot with NASCAR’s past most popular driver ‘Awesome Bill from Dawsonville’.

“I was a photographer and photo editor for Scene and Illustrated back in the day,” Elliott said. “I had clients, Coca Cola and Budweiser, and Bill went to drive for Budweiser and he had to come to my studio to take pictures and so we met.”

Chase Elliott is their only child together, however Bill Elliott has two grown daughters. One daughter Brittany, 19 years old is serving the country in the Air Force in New Mexico, and the other daughter Starr lives in Dawsonville and has a young daughter, Kennedy.

“The grand parenting role is a lot of fun,” Elliott said. “I’m C C. It’s the first thing she called me so I guess that’s what all my grandkids will call me. You know how that happens, the first one gets to name you.”

Elliott admits that racing was not her passion growing up and she most certainly did not know anything about it until she got more involved through her photo work.

“I never liked racing,” Elliott said candidly. “Actually Don Grassman, who owns CIA photography, he and I worked together at the Northwest Florida Daily News. He asked me would I come help him.”

“I knew nothing about racing,” Elliott continued. “In fact, they put me on pit road.  Something happened to Dale Earnhardt that day, his car broke or something, and they’re all screaming ‘Go to Earnhardt’s pit’ and I said, ‘You know guys, I don’t know who Earnhardt is’. What number is he and I’ll get to his pit as soon as I can.”

“I really did like it after I got into it,” Elliott said.”I thought it was a lot of fun. When I was growing up, I thought we’re just watching a bunch of people go around in circles. But there’s a lot more than just going around in circles.”

Elliott has definitely had to become fond of the sport with not only her husband but now their son Chase in the racing spotlight. Chase was signed this weekend by Hendrick Motor Sports, a great coup for the young up and coming driver.

“I really enjoy what Chase is doing,” Elliott said.”Being around the people there, it’s just so down to earth and so fun and so family-oriented.”

“I absolutely love watching these little kids racing around, watching them grow and develop,” Elliott continued. “Some of them are just really good little racers. Some of the races that we see are really good races too. I enjoy that a lot.”

Like every mom, however, Cindy Elliott does indeed worry about her young son, knowing the dangers and vagaries of being behind the wheel of a race car.

“I get worried because you just do,” Elliot said. “It’s just one of those motherly instincts.”

According to Cindy Elliott, Chase takes after his father in more ways than just on the track, which is fine with her.

“His personality takes a lot after Bill’s personality, which I thank God for every day,” Elliott said.  “I’m a little more high strung than both of them. Chase is a good winner but he is also a gracious loser. He takes a lot of that after Bill.”

One of the most interesting challenges is balancing where husband Bill is in his career and where her son is now in his.

“Bill has accomplished much but he still has things to accomplish,” Elliott said. “He’s taken a lot of time with Chase and enjoys being there at the race tracks as much as I do.”

“Bill will focus on what he has to do for whatever period that is. He will give his best effort and 100% to everything he can do for his career and to help Chase.”

Cindy Elliott’s next balancing act will be managing the attention on her son Chase, with the signing to HMS, and on her husband Bill, who is racing this year for Phoenix Racing, in NASCAR’S premiere series.

What is keeping her grounded now more than ever is how fortunate she is feeling to be in this special position.