Daytona 500 Square-Dance: Strategy Comes To The Forefront Of 500 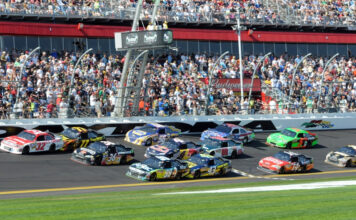 This year’s Daytona 500 brought forth a whole new type of racing that fans have been trying to figure out whether if it is good or bad.

On track, arguments have persuaded if fans like the way it looks and if they agree with the type of presence it has taken. [/media-credit]If you listened to radios, you would have heard some interesting conversations between drivers, you’d be intrigued to the type of conversations that they were having.

For example, when the caution came out early in the Daytona 500, Marcos Ambrose and David Ragan spoke of how they were going to get lined up on the restart.

Some of the conversations at time got kind of awkward as when Jeff Gordon worked with Kasey Kahne, he said, “We had a good first date.” Gordon’s spotter, Jeff Dickerson, added to the fray when Gordon got lined up with Bayne, saying, “True love never dies.” in reference to how they worked together during the Duel. One of the most awkward was during the Nationwide race with Kyle Busch and Joey Logano.

Busch: Hey, hey, look whose back.
Logano: I like you.
Busch: I love you…..I’ll give you the outside to make the switch.

Due to the amount of different driver conversations and trying to achieve the best conversation, drivers even had huge switch pads to where they could switch to their teammate’s channel, but also other driver’s channels. This act of drivers having to work together had some frustrated, including Dale Earnhardt Jr.

“If I just had to worry about my own (stuff), I’d be leading or top three,” Earnhardt Jr. said on the radio at one point. “But you gotta have someone w/you all the f@#$ng time.”

The frustration with the style of racing for Earnhardt Jr. also led to some more comments later on in the race.

“I think everybody’s brains fried,” Earnhardt said. “They can’t hardly pay attention. This style of racing man, it’s tough on your head. Let’s sit back and kill some laps. I don’t want to be pushed in the s&#$. Just seems like guys should be more cool. If we can’t beat the leader, I don’t want to race three-wide for f@#$ing fourth. You’d think guys would be more cool. The race is at the end, man. They’re going to knock some more s@#$ out of the race. They’re going to hit the wall a little more.”

This frustration brought forth drivers trying to work out how they would work together, hence the conversation that took place between Kahne and crew chief Kenny Francis after Earnhardt’s comments.

Kahne: So he (Earnhardt Jr.) just doesn’t want to be part of three-wide?
Francis: Yeah, I think he’s just trying to be conservative there.

In all, drivers were finding the need to find someone who was okay with their style of racing and didn’t mind being that partner. Earnhardt Jr. found that when he paired up with Tony Stewart.

Earnhardt Jr.: I just wanna to stay outta the s@#$.
Stewart: You read my mind, man.

Even drivers that had been wrecked and we’re just trying to make laps found issues with finding that partner. Jeff Gordon was trying to ride around to log laps and gain positions when his partner Brian Vickers was not doing as he’d requested. Gordon came on the radio and said, “I’m tired of messing with the #83 if he keeps trying to push us too close to the pack I’m going to brake check him.”

Sometimes, there’d be multiple drivers who had requests set forth to work with one another. Carl Edwards requested to dance with Kyle Busch; however Busch politely declined as Bayne had shown up first

When communication was going well, it seemed to bring forth a certain chemistry that you normally don’t see. However, a failure communicate was not a good situation to have. One failure brought forth one of the wrecks during the day as David Reuitmann didn’t give Michael Waltrip a good enough warning before they approached a pack of cars.

The good thing about the quick communication is it allowed drivers to be able to quickly apologize to each other for accidents. After Juan Pablo Montoya spun, McMurray got on the radio to apologize.

Montoya: I just kept getting loose.
McMurray: Didn’t mean to spin you out, Juan. Sorry about that.
Montoya: Don’t worry. No big deal.

This communication also involved strategy in how to time the switch perfectly via making sure not to get your own motor hot, which brought forth communication through drivers and through the spotters. An example would be Montoya and McMurray trying to hook up correctly.

Montoya: Dude, I tried so hard to back off
McMurray: They kept getting on my outside and I just tried to get up to your bumper and they were there, Juan. It’s just so hard to get it.

Kyle Busch and Denny Hamlin also talked together about when to make the switch as when Hamlin pushing wasn’t working, Busch suggested, “Try to go by me. My (motor) is pretty cool. I’ll push you.”

In the Nationwide race, Busch worked with Logano and also played giving him suggestions on how to make the switch better, saying, “Hey Joe, when we switch, drag the break a little more so slow the slowdown. When we get out there, I just hit a wall of air.”

Then it involved the strategy of making sure to pit together, as shown through Steve LeTarte, Earnhardt Jr.’s crew chief, passing on a message to Stewart.

LeTarte: Hey Smoke, its Stevie. We’re going to get gas only if you can tell Darian.
Stewart: All right, I’ll switch over.

Beyond the drivers and crews, if you would have heard the spotters, at times they sounded like air traffic controllers with how they were working to make sure people didn’t wreck. This was needed as the driver who was pushing wasn’t able to see what was going on in front of the car he was pushing.

“I’m driving blind,” Earnhardt Jr. told his spotter TJ Majors at one point. “I might as well not have any f@#$ing sight behind him. I know it’s hard to believe, but it’s true.”

If you were up on the spotter’s stand with them, you would’ve seen how they were working to get partners to work with on track. It would’ve looked like a dance with how they were swinging between partners to pair up. As Brett Griffin, spotter for Jeff Burton said, “It’s like a square dace on the roof. Yellow comes out we scramble to find a new partner!”

Even Majors made jokes with Earnhardt Jr. when he was trying to make a partnership between Earnhardt and Waltrip during the Nationwide race.

Majors: I see Ty (Norris, spotter for Michael) up here. Got anything I can bribe him with?
Earnhardt Jr.: I think I got a picture of him in drag somewhere.

The strategy was so complex in how to run it that at lap 60, Steve LeTarte said over the radio, “We have not even run a 150-mile qualifying race yet. My head hurts.”

In all, the race brought forth a new meaning to one of Darrell Waltrip’s favorite words – co-opetition. Now what is that? As Waltrip defines it, it is working with your competition for the benefit of yourself.

Trevor Bayne did that best as he worked with Jeff Gordon on Thursday to learn the ways of drafting and many other different drivers on Sunday to stay up front and be there to win.