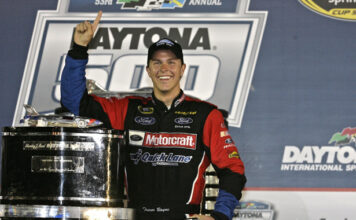 [/media-credit]1. Trevor Bayne: Bayne, in the No. 21 Wood Brothers Motorcraft car, stunned the racing world, becoming the youngest Daytona 500 winner in history. With a momentous push from Bobby Labonte’s No. 47 car, Bayne held off the hard-charging Carl Edwards, taking the victory in only his second Sprint Cup start. Afterwards, the deeply-spiritual Bayne thanked the Lord, who brushed off the comment, saying He was a Junior fan.

But I made history. Not only by becoming the youngest winner in history, but by becoming the first Daytona winner to be eliminated from Cup championship contention before the race. And I can’t think of a better birthday present for my 20th birthday. Hopefully, this win will lead to a long NASCAR career, because I’ll need plenty of time to live up to this.

As for now, the team and I are trying to make this moment last, and sell as many ‘Got Wood?’ merchandise as possible.”

2. Kurt Busch: Busch, with wins in the Bud Shootout and Gatorade Duels already under his belt, was in contention in his bid to complete the triple with a Daytona 500 win. But the driver of the No. 22 Shell/Pennzoil Dodge came up a bit short, unable to find a path to the lead, and settled for fourth. Busch lamented that he should have gone low on the back straightaway instead of selecting the middle line.

“I just couldn’t find the right partner at the right time,” Busch said. “And that’s quite ironic in a race characterized by more coupling than a Tim Richmond key party, circa 1986. And one marked by just as many partner exchanges, as well.”

3. Carl Edwards: As the green flag waved for the final green-white-checkered finish, Edwards was 10th, seemingly out of position to make a run for the win. But after linking up with David Gilliland’s No. 34 Taco Bell car, Edwards and the No. 99 Aflac Ford surged forward and into second behind Trevor Bayne. Edwards tried a pass for the lead, unsuccessfully, and finished second.

“How about this new points system?” Edwards said. “I love it. You finish second, and you’re in first. I’m sure Mark Martin could appreciate it as well.

I really got a strong push from Gilliland. I must say, it’s not the first time I’ve been backed up by Taco Bell. And it’s quite unfortunate that my Roush Fenway teammate David Ragan was black-flagged for passing before the start-finish line on the penultimate restart. I know UPS prides itself on promptness, but this time, they were a bit too early. David learned the hard way that ‘once you get ‘black,’ you can’t go back,’ to the front.”

4. Kyle Busch: Busch finished 8th at Daytona, remaining in the hunt until the end after surviving several incidents, early and late in the race, before closing strong. The No. 18 M&M’s Toyota was spun by Michael Waltrip on lap 5, and a lap 198 melee clipped Busch and caused a tire rub that forced a late pit stop. He led 3 laps on the day and led the way in an otherwise disappointing day for Joe Gibbs Racing.

Then, Waltrip triggered another crash, the Big One, on lap 29, by doing the same thing to David Reutimann, another Toyota driver, and Waltrip’s teammate. I think it’s official: when Waltrip trails you, it’s like being followed by the ‘Grim Reaper.’ When it happens again, it’s akin to being stalked by the ‘Grim Reappear.’”

5. Tony Stewart: Stewart started second on the final restart at Daytona, but the line led by race leader Trevor Bayne got the jump on the restart. Stewart attempted to slide in to the fast lane, but was shuffled back in the scramble, and ended up a disappointing 13th.

“Trevor Bayne ran a great race,” Stewart said. “It’s a life-changing experience that I hope he’s ready for. He’ll soon be deluged with an onslaught of ‘yes men,’ and, if he’s lucky, even more ‘yes women.’

As you know, I won the Nationwide race on Saturday, while Michael Waltrip won the Camping World trucks race on Friday night. That means all three Daytona winners are not even eligible for the respective series championships. Brian France was right; the new scoring system is much simpler. There’s a common leader among all three series, because, whether Camping World, Nationwide, or Sprint Cup series, ‘confusion’ reigns.”

6. Juan Montoya: Montoya led 5 laps and finished sixth in an action-filled Daytona 500 after surviving two skirmishes that slightly damaged the No. 42 Target Dodge. Montoya teamed up early with teammate Jamie McMurray, but when McMurray lost a cylinder, Montoya was forced to look elsewhere for a draft partner.

“I thought Jamie did well considering he was driving on 7 cylinders,” said Montoya. “He should be used to it. With the exception of Daytona, Indianapolis, and Charlotte, he drove that way in all of 2010.”

7. Jimmie Johnson: Johnson’s defense of his five consecutive Sprint Cup titles started auspiciously with a 27th-place finish, 19 laps off the pace. Johnson’s No. 48 Lowe’s Chevy was sucked into a lap 29 pileup started when Michael Waltrip sent David Reutimann spinning. Johnson nearly escaped danger, but was collected by the spinning No. 00 car.

Daytona boasted a record 74 lead changes. Just don’t expect one at the end of the year.”

8. Bobby Labonte: Labonte, the 46-year-old 2000 Winston Cup champion, pushed 20-year-old Trevor Bayne to a lead on the final restart the No. 21 Wood Brothers car would never relinquish. Labonte eventually finished fourth, his first top-5 finish since Las Vegas in 2009, and places him third in the Sprint Cup point standings.

“Just call me ‘The Cougar,’” Labonte said. “Because I pushed someone much younger than me into something for which he probably wasn’t quite ready. Does that make me a ‘statutory racer?’ Not in Florida.

Anyway, I’m proud to give JTG Daugherty Racing such a great finish. They have a great program with great leadership, as well as great ownership. I love working for Brad Daugherty. Among former NBA player/black hillbilly car owners, he’s by far my favorite.”

9. Dale Earnhardt, Jr.: With several notable favorites, including Hendrick teammates Jeff Gordon and Jimmie Johnson, as well as the entirety of Richard Childress Racing, nursing battered cars, the stars were aligning for what would have been a historic and sentimental Earnhardt victory. But after surviving one green-white-checkered restart, the No. 88 Amp Energy car was collected in the second, and Earnhardt finished 24th, six laps down.

“That’s when ‘Junior Nation’ becomes ‘Junior Damn! Nation,’” Earnhardt said. “And that’s the nature of superspeedway racing. Some drivers take the attitude of ‘going for broke’ a bit too literally.”

10. Clint Bowyer: Bowyer led 31 laps at Daytona, second only to Ryan Newman’s 37, and was charging with 4 laps to go before being victimized in the final pileup of the day. Bowyer, despite extensive damage, stayed on the lead lap and finished 17th.

“It was an up-and-down day for Richard Childress Racing,” Bowyer said. “While Paul Menard scored a top-10 finish, Kevin Harvick and Jeff Burton suffered engine failures. In his first Cup race with the ‘King Of Beers’ on the hood, Harvick’s No. 29 car said ‘This Bud Is Through.’ Burton’s Caterpillar Chevy wasn’t much better, and became ‘heavy equipment’ only for a tow truck when the No. 31’s engine expired on lap 92.”