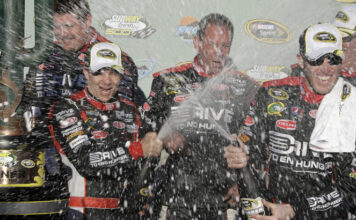 After one of the most exciting Daytona 500 finishes, the Cup Series promptly headed west to Phoenix International Raceway. Although it actually rained a bit in the Valley of the Sun, the second race of the NASCAR season, the Subway Fresh Fit 500, was filled with its own share of surprises. [/media-credit]Surprising:  In contrast to the youngest winner, 20 year old Trevor Bayne, celebrating in Victory Lane after his Daytona 500 win last week, a 39 year old veteran driver was finally able to celebrate a victory, ending a 66 race winless streak.  After receiving a big bear hug from team owner Rick Hendrick, the driver of the No. 24 Drive to End Hunger Chevrolet, Jeff Gordon, stood relieved and overwhelmed with emotion in Victory Lane.

What seemed to mean the most to Gordon, in addition to beating Kyle Busch of course, was how the fans embraced his win.

“Man, we just beat Kyle Busch!” Gordon said after getting out of his race car. “Are you kidding me? Pinch me, pinch me.”

“I don’t really care how we do it because we just wanted to get to Victory Lane,” Gordon said. “But to do it that way, leading the most laps, and to see the fans’ reaction. What an awesome feeling it is.”

“God, it feels so amazing,” Gordon said. “I’ve got to say thanks to the fans.”

With the win at PIR, his 83rd, Gordon officially tied Cale Yarborough for fifth in NASCAR’s all-time win list. Gordon also catapulted up 21 spots in the points, now in the fifth position.

Not Surprising:  It was not surprising that Kyle Busch, who had won both the Truck and Nationwide Series races at PIR, was right there nipping at Gordon’s heels in the final laps. Busch battled back from an early incident to give Gordon a run for his money, just coming short of the sweep by finishing as the runner up.

After paying homage to Gordon, Busch then apologized for getting into Carl Edwards, whose pole sitting race car was totally wrecked as a result of the contact.

“It was unintentional,” Busch said. “All that aside, we came through a lot of adversity and kept battling through everything that was thrown at us. There at the end, Jeff just had a better car than us and flat out passed me.”

Surprising: In a flashback moment to Daytona, there was actually a ‘big one’ at Phoenix International Raceway.  Thirteen cars were involved, including the likes of Brian Vickers, Jamie McMurray, Clint Bowyer, Jeff Burton, David Ragan, Regan Smith and David Reutimann to name a few.  The race actually had to be red-flagged in order to allow for the extensive clean up needed.

Clint Bowyer summed up his take on the ‘big one’ up best. “I’m pretty disgusted with the whole thing,” Bowyer said. “Our day is done.”

Not Surprising:  Whether as a result of the big one or smaller skirmishes on the track, there were several drivers who were unhappy with one another, sparking the first rivalries of the season. One of the biggest differences of opinion occurred between Carl Edwards and Kyle Busch, who clashed in an early incident.

“In my opinion, this was the car to win,” Edwards said after his tussle with Busch. “That’s too bold a move to make early in the race.  We had been in the running for the race win.”

Other cross words were exchanged between Brian Vickers and Matt Kenseth after getting into one another.

“Matt wrecked us,” Vickers said simply. “It’s coming back to him.”

Surprising: One of the most surprising finishes was for NASCAR’s most popular driver, Dale Earnhardt, Jr. After receiving a penalty for entering too fast into his pit, sliding through his pit stall, and breaking a wheel off the jack, Junior rallied back for a top ten finish.

Not Surprising: Rick Hendrick’s wisdom in making his giant crew chief swap amongst the Hendrick drivers, sans Jimmie Johnson, certainly became evident at this race. Thanks to his pairing of Steve Letarte and Dale Earnhardt, Jr., the new duo was able to rally back from adversity, with Letarte serving as head cheerleader. And of course, the driver in Victory Lane, Jeff Gordon, credited his new crew chief pairing with Alan Gustafson, with getting him back to winning ways.

Surprising and Not Surprising: It was surprising, yet not surprising, that last week’s winner Trevor Bayne had such a difficult time at Phoenix. He wrecked his primary car in practice and had the same experience in his back up car in the race. Bayne hit the wall hard, bringing out the third caution in the race and totally destroying the rear end of his No. 21 Wood Brothers race car.

“I don’t know what happened,” Bayne said after the wreck. “That’s tough coming off of our high at Daytona to come to this, but we’ve got a great race team behind us.”

“We’ll be back at Vegas,” Bayne continued. “I hate it ended this way this weekend, but we’ll be back.”

Indeed all of the Sprint Cup drivers will be back and this time they will try their luck on the track in Sin City. The Kobalt Tools 400 will run at the Las Vegas Motor Speedway on Sunday, March 6th at 3:00 PM and will be broadcast on FOX and PRN.