Jeff Gordon Is Back. Look Out! Other Races Sleepers 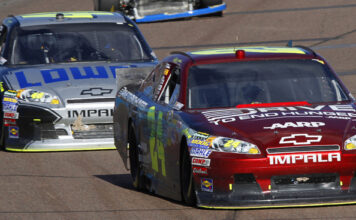 This past weekend we saw Jeff Gordon finally break the 66-race winless streak to score his second Phoenix win at the Subway Fresh Fit 500. We haven’t seen a Jeff Gordon performance like this in a while. He had a very strong car early, but many believed his day was done when he hit the wall going into Turn 3 pretty hard after Carl Edwards cut a tire. The tire was cut primarily after he was body slammed by Kyle Busch and after hitting the curbing with his left side, he was off for the ride and Gordon was in the wrong place at the wrong time. Despite the right side of his car looking scratched apart, he picked apart the field and led the most laps and won the race. Under this new 43-1 points system it is more important than ever now to win races.

[/media-credit]Gordon is motivated and as passionate as ever in his pursuit for another championship and for those of you who believe he is a six-time champion this will make you even more ecstatic for this season. A seventh championship under the old way will put him amongst the greatest drivers of all-time. Dale Earnhardt, and Richard Petty. Who can forget the days when Gordon used his bumper on Rusty Wallace at Bristol or the daring move he made on Wallace at the Daytona 500 back in 1999. Ladies and gentleman, Jeff Gordon is back. When was the last time we saw Gordon win a race before his Hendrick teammate Jimmie Johnson? How about

Next week we have Las Vegas and as we all know, Gordon dominated that race last year and if not for Steve Letarte’s call to go for two tires, Gordon would have easily won that race. I expect a breakout year for Gordon after seeing his performance at Phoenix in person. The cheers that were heard were incredible and if he starts winning on a consistent basis like he did back in the 90’s, I expect some of those cheers to turn to jeers, but the fans that have followed and supported Gordon since his rookie season back in 1993 will always stick with Gordon.

I thought the race was really exciting from start to finish, unlike the previous two nights where fans were left bored out of their mind after they saw Kyle Busch win both. Now, I like Kyle. He is a great driver, but really? 200 of 200 laps led and Danica Patrick 4th in points? Yeah…the Nationwide Series is not that exciting anymore. I hate to say and the Camping World Truck Series is only exciting either at Daytona, or when someone else not named Kyle wins. What did you guys think of the race? Leave any comments or questions below and I’ll answer them.

Before I leave you today on this beautiful night, I have to say thanks to my good friend Shelby Kellerman for being an absolutely amazing friend and it’s an honor. Thank you guys and hope you enjoyed the races. Congratulations to Jeff Gordon and that leaves him just one victory shy of Darrell Waltrip’s modern era record of 84 wins.

Ryan O'Harahttp://www.twitter.com/RyanPrakOHara
Ryan O'Hara is the Senior Writer of FightNights.com and is recognized as one of the top boxing writers in America. He is also a former Fox News Radio news anchor and TV Producer for several networks. O'Hara graduated with his Masters in Human Security in 2017 with a 3.7 GPA and also obtained his Bachelor's Degree in 2015 in Global Security & Intelligence Studies -- all from Embry-Riddle Aeronautical University in Prescott, Arizona. O'Hara is also a former college ice hockey player and skates in his free time. Follow him @OHaraSports on Twitter!
Previous articleMichael Annett Las Vegas News and Notes
Next articleNASCAR Top-10 Power Rankings: Phoenix