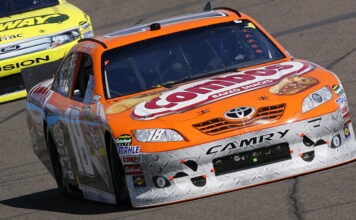 [/media-credit]1. Kyle Busch: With wins in the Camping World and Nationwide series already logged, Busch fell just short of the triple, finishing second to Jeff Gordon in the Subway Fresh Fit 500. Busch took the lead at Phoenix on lap 291 and held on until lap 304, when Gordon muscled by him for the lead. Busch now leads the Sprint Cup point standings with a 3-point edge over older brother Kurt.

“Natalie Portman dazzled with her Oscar-winning role in Black Swan,” Busch said. “Next up for Ms. Portman? Playing the lead role in the story of Teresa Earnhardt, in a film entitled White Loon.”

“There may be room for only one black swan in ‘Swan Lake,’ but in the Busch family, everyone, relatives and competitors alike, will tell you there’sroom for two ‘black sheep.’”

2. Jeff Gordon: Gordon snapped his 66-race winless streak, capping a dominating day in Phoenix by passing Kyle Busch with 8 laps to go and cruising to the victory. Gordon tied Cale Yarbrough for fifth on the all-time wins list, with 83, and ended a near two-year run of frustration.

“In the spirit of Aron Ralston, subject of the Oscar-nominated movie 127 Hours,” Gordon said, “I’d like to have my left arm raised in victory as opposed to my right. Ralston showed great courage in the face of a harrowing predicament, just like me, except I did it for nearly two years, as opposed to a measly 127 hours.”

3. Carl Edwards: Edwards set a track record in Saturday’s qualifying in taking the pole, but his opportunity to show off that speed fizzled when he was forced off the track when Kyle Busch’s No. 18 Combo’s Toyota got loose on lap 60. Edwards’ No. 99 Subway Fusion ran over the curb and into the grass, causing serious front-end damage. Repairs cost Edwards 60 laps, and he finished 28th.

“What did they say after the last award was handed out at the Academy Awards?” Edwards asked. “’We just ran out of talent.’ That’s quite similar to what Kyle Busch said in his apology to me. But seriously, Kyle showed contrition and remorse, so there was no need for a confrontation. I think what we’re seeing this year are kinder, gentler versions of both Kyle and I. We both believe we can win the Sprint Cup, and we both realize rash behavior can quickly derail those hopes.”

“By no means am I a lover, and I’m definitely not The Fighter, the movie in which Christian Bale earned an Oscar for best supporting actor. On that note, what do you call it when Trevor Bayne goes all the way from winning the Daytona 500 to a 40th in Phoenix? A ‘Christian Bail.’”

4. Kurt Busch: Busch started second at Phoenix and posted his second top-10 result of the season, finishing 8th in the Subway Fresh Fit 500. Difficulty in the corners prevented the No. 22 Shell/Pennzoil Dodge from challenging for the win, but Busch headed to Las Vegas content with a solid points-paying day and the knowledge that the Busch brothers occupy to top two spots in the point standings.

“If our parents ever doubted our decisions to race professionally,” Busch said, “I’d just like to say to Mom and Dad, ‘The Kids Are All Right.’ And while we’re on the subject of the Academy Awards, I’d like to congratulate Kyle for winning the ‘best actor’ award at Phoenix, for making his apology to Carl Edwards seem genuine. Now that’s acting!”

5. Tony Stewart: Stewart led 59 laps at Phoenix, second only to Jeff Gordon’s 138, and finished 7th, joining Stewart-Haas Racing teammate Ryan Newman, who finished 5th, in the top 10. Stewart is 4th in the point standings, 11 out of first.

“Two races into the season,” Stewart said, “and we’ve had a car capable of winning both times. I’m pleased that we’ve been so competitive early in the season. Usually, I don’t get warmed up until Winter’s Bone gives way to ‘Summer’s Boon.’”

“As you may know, Winter’s Bone tells the story of a meth-addled family in the Ozark’s. You may know it by its alternate title, Mayfield’s In The Mountains.”

6. Jimmie Johnson: Johnson qualified a disappointing 28th on Saturday, but the No. 48 Lowe’s team unlocked the speed in Johnson’s Impala, courtesy of numerous adjustments and quick work in the pits. Johnson moved up to third on lap 294 and held off Kevin Harvick to post his first top-5 of the year.

“I’ve got to hand it to Chad Knaus for making the right calls,” Johnson said. “It’s been said that everything Chad touches turns to gold. Once upon a time, that meant everything ‘turned to gold’ for NASCAR, assuming they converted fines levied against Knaus into gold.”

“There’s a lot of drivers claiming they can win the Sprint Cup championship. But, let’s face it, we all know whose name will be called come November. The Academy Awards has one thing NASCAR lacks when the words ‘And the winner is…’ are spoken: suspense.”

7. Kevin Harvick: Harvick rebounded from engine failure at Daytona to finish a solid 4th at Phoenix, leading one lap and collecting a valuable 41 points. The No. 29 Jimmy John’s Chevrolet found trouble early, with a slow pit stop followed by a spin triggered by contact in front of him.

“Daytona was hard to swallow,” said Harvick, “but our performance at Phoenix gives me confidence that this team is capable of a championship. Much like the themes in the Oscar-nominated film Inception, a ‘seed has been planted,’ instilling us with the confidence that we can do it. Those who doubt me may very well say ‘in your dreams,’ but just look on the hood of my car, where the words ‘Jimmy John’s’ appear. How can one say we’re not championship material when nearly the entire name of 5-time Cup champion Jimmie Johnson is on my hood?”

8. A.J. Allmendinger: Allmendinger validated his 11th in the Daytona 500 with a 9th at Phoenix, sporting Ford’s only top-10 finisher. He’s third in the Sprint Cup point standings, 11 behind Kyle Busch.

“As the driver of the No. 43 car for Richard Petty Motorsports,” Allmendinger said, “a lot is expected of me. And I wouldn’t have it any other way. Before every race, I get a pep talk from Petty, and I can tell you first-hand that nothing inspires more than The King’s Speech.”

9. Mark Martin: Martin overcame slight damage after contact with Kevin Harvick’s No. 29 car to pilot the No. 5 GoDaddy.com Chevrolet to a 13th-place finish at Phoenix. It was a banner day for Hendrick Motorsports, as Jeff Gordon won for the first time in 66 races and all four HMS cars placed in the top 13. Martin is now 6th in the point standing, 65 behind Kyle Busch.

“As I very well know,” Martin said, “there’s no shame in coming in second, or coming in 13th, especially here at Hendrick. As the low man on the totem pole on a team consisting of a 5-time champion, a 4-time champion, and NASCAR’s most popular driver, The Social Network here affords me the chance to rub shoulders with greatness. I’m a popular driver in my own right. Heck, everybody ‘likes’ me. I expect one day, when I update my status to ‘retired’ for good, I’ll be honored with a lifetime achievement award.”

“This is a team to be reckoned with,” Newman said. “Tony and I have a great working relationship, unlike the one I had with former teammate Rusty Wallace. That association was abrasive, so abrasive that one could call it True Grit. Rusty and I never saw eye to eye, even when we both were wearing eyepatches.”

Jeffrey Boswell
Previous articleJeff Gordon Is Back. Look Out! Other Races Sleepers
Next articleWith TV Ratings and Attendance On The Rise, NASCAR Is Rebounding