With TV Ratings and Attendance On The Rise, NASCAR Is Rebounding 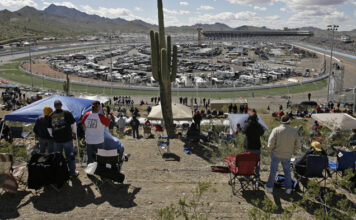 Everyone is familiar with the current economic downturn the United States is currently facing, and all have felt the effects in one way or another.

Such is the case for NASCAR, the country’s second largest spectator sport, which trails the dynasty that is the National Football League.

[/media-credit]During the past few seasons, TV ratings ratings and track attendance for the sport have plummeted as Americans have found it harder to make end’s meet.

Fans have been unable to make the trip to their favorite track and in some cases, had to cancel their television service.
Television ratings for the 2008 and 2009 seasons fell drastically, to lows that hadn’t been experienced in years. For those who did tune in for a NASCAR race, could easily notice many empty seats in the grandstands and fewer campers parked in the infield.

All of these shortfalls didn’t fall unnoticed to the executives at NASCAR, who quickly looked into the reason, but nothing wasto blame completely.

In an attempt to breathe new life into the sport, NASCAR announced major changes to their points system last month, as well as new criteria for the post-season playoffs known as the chase. Last year, they completely revamped their schedule, which hadn’t seen a major overhaul in almost ten years. While at it, a new front end for their Sprint Cup cars was set to be rolled out for the 2011 season.

With a sense of freshness in the air for the 2011 season, things appear to be returning to their pre-recession numbers. The Daytona 500, broadcasted by FOX, saw a 17% rating increase as over 30 million viewers tuned in to see newcomer Trevor Bayne win in only his second career Sprint Cup Series start in front of a packed Daytona International Speedway.

Again yesterday, the stands were sold out for the Subway Fresh Fit 500 at Phoenix where Jeff Gordon won for the first time in nearly two years. FOX’s broadcast of the series’ second race of the season, accumulated a 5.3 TV rating compared to the 5.0 of last year that was held at Auto Club Speedway in California.

If NASCAR were looking to hit a home-run and get things back on track, they sure are getting it. With a 20 year old unknown winning the sport’s biggest race last week, and one of the sport’s greatest stars winning for the first time in 66 races, fans are getting exactly what they are looking for- storylines, excitment and an excellent product.

Let’s all keep our fingers crossed that this trend continues, and the sport we all love so much returns to it’s glory.

SM Staff
Previous articleNASCAR Top-10 Power Rankings: Phoenix
Next articleSet for a makeover, Phoenix ends an era with a bang