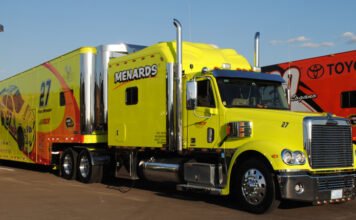 One of the traditions of the Las Vegas Motor Speedway race weekend is the hauler parade right down the Las Vegas strip. Participating this year was Jeff Icenhour, hauler driver for Paul Menard’s No. 27 Menard’s Chevrolet, with whom I had the pleasure of riding with for the parade.

Icenhour, a 43 year old from North Carolina, has been driving haulers for over ten years. He got his start after a connection made via his son turned into the opportunity of a lifetime. [/media-credit]”A guy that used to be with the 32 car, my son and his son played football together,” Icenhour said. “So, I just stayed on to him until he helped me out.”

Icenhour comes by his trucking skills naturally.  Much of his family has been in the trucking business and Icenhour even got his father involved, who is currently driving for the No. 43 team.

“I started doing it before my dad,” Icenhour said. “I got my dad into it.”

While he and his father share the trucking passion, Icenhour acknowledges that the lifestyle has his challenges. This is especially true since he has a wife and two sons at home as well.

“It’s hard,” Icenhour said. “I have a wonderful wife. I couldn’t do it without her. She’s supportive so that’s great.”

Icenhour, who is nicknamed ‘Cowboy” due to his passion for horses and his constantly-worn cowboy boots, is also feeling very fortunate to now be with Richard Childress Racing, a deal which came about for the 2011 season for he and his driver Paul Menard.

Icenhour is also fond of his driver, Paul Menard.

“Paul’s pretty cool,” Icenhour said. “He’s not the high maintenance driver. He does it because he likes it and he doesn’t get caught up in it.”

“From the time he came into Nationwide, I always liked that kid and pulled for him,” Icenhour said of his driver. “There was something I liked about him from the first time I saw him. He’s in some good equipment now so he will do well.”

Although devoted to his driver, Icenhour has seen his share of ups and downs in his hauler driving career. Prior to coming to RCR, Icenhour drove for Evernham Motorsports and then Richard Petty Motorsports.

Given his most recent employment, Icenhour knows the vagaries of being part of a race team.

“Nothing is guaranteed in this business,” Icenhour said. “There is no such thing as job security. If they get rid of my driver or crew chief, I might be gone too.”

While there may not be job security, the life of a hauler driver is most certainly varied, in addition to being demanding. Icenhour describes his role as not only having to be a great driver, getting some of his team’s most valuable assets to the track, but also as a jack of all trades, particularly once he arrives at the track.

“You’re the gopher,” Icenhour said. “And sometimes the babysitter. It’s also my responsibility to make sure the boys eat and get fed.  Overall, I just look after them.”

Icenhour has been hard at work since last weekend’s race.  He did not even get to return home in between, instead driving the hauler directly from Phoenix to Las Vegas.

The day before the hauler parade, Icenhour spent most of the day getting his rig in tip top shape for the fans along the parade route to enjoy.

“We got here Tuesday and Wednesday, we came out and polished on our trucks,” Icenhour said. ” I polished all the wheels and all the aluminum. That took pretty much all day.”

Icenhour and the rest of the hauler drivers were in fine form as they took to the Las Vegas strip. Waving at the crowds along the way, the driver of the No. 27 hauler was only too happy to oblige with honking his horn as requested, much to the delight of the cheering fans.

“Sometimes it’s a little aggravating,” Icenhour said of the parade, feeling especially sorry for those in traffic, inconvenienced by the parade. “But we need fans and we need to do whatever we can do to put fans in the seats.  If this helps, I’ll do whatever I can.”

After driving down the length of the entire Vegas strip, engaging all of the race fans, Icenhour made the turn onto the interstate, along with the other haulers, to head toward the race track.  After pulling in ever so carefully and parking just inches away from Clint Bowyer’s hauler, Icenhour jumped out of his rig to start unloading his tool box.

“We take turns and help each other unloading,” Icenhour said. “It may not be your teammates but we all help out.”

“A lot of these hauler drivers, we’re like family,” Icenhour said of his hauler compatriots. “If one breaks down, someone will stop and make sure everything is cool. We help one another a great deal.”

After stifling a bit of a yawn, surviving the hauler parade and the intricate parking in the NASCAR garage, Icenhour was ready to start fulfilling his duties at the race track.  He summed up his hauler driver experience as being his ‘dream job.’

“You have to like it to do this,” Icenhour said. “It’s hard but it’s a good life. I am very fortunate to be here, I really am. This is the best job I’ve ever had.”