For Andy Lally, NASCAR Has Always Been His First Love 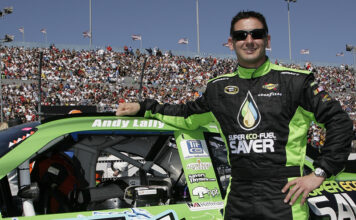 Andy Lally, known as one of the best road racers in the world with three Rolex 24 Hour at Daytona wins under his belt, has always had just one dream. He has always wanted to run the NASCAR circuit.

“This is where I’ve always wanted to be,” Lally said of his foray into the NASCAR ranks. “My first race car toys, everything I’ve ever watched on TV was always NASCAR. This was my first love and always where I wanted to go.” [/media-credit]Lally grew up idolizing many of the NASCAR greats back in the day. His initial racing heroes included Bobby Allison, Neil Bonnett and Morgan Shepherd.

“When I got my first go kart when I was 12 and started racing, right around that time was when Davey Allison came on the scene,” Lally said. “He then became my new favorite driver and was my first real racing idol and hero.”

Lally would have loved to have followed his NASCAR idols onto the track, but he and his family had no racing background. His soccer coach introduced him to a local car dealer, Walter Simonendinger, who took Lally under his wing and introduced him to road racing instead.

“We were just doing local, regional events, but it got me out of a go kart and into a car,” Lally said. “He mentored me for about three years and helped me along until I was able to get rides in more of a national series. That’s how the road racing route took hold.”

“I’ve always wanted to give NASCAR a shot but all my opportunities have been up that ladder,” Lally continued. “It’s hard to make a lateral move.”

After establishing himself in the sports car world, Lally then began to work his connections to try to make his NASCAR dream a reality. In fact, Lally became a bit of a nag, particularly with Kevin Buckler, TRG team owner, to get his shot behind the wheel of a stock car.

“We started working together in the Rolex Series in the end of 2004,” Lally said of his association with Buckler. “We clicked right away and started winning races right away.” A lot of this NASCAR program came about from me bugging Kevin (Buckler).”

Lally admits that he is humbled and even a little bit frustrated as he makes the transition from road racing star to stock car racing student. But he readily says that he is tackling his NASCAR career with his “eyes wide open.”

“I know how good these guys are,” Lally said of his Cup competitors. “I know that it would have been better to go do a couple years of Nationwide and really learn these tracks. But the opportunity came with TRG to give Sprint Cup a shot.”

“I’m 36 and I’m not getting any younger,” Lally continued. “This may be my only shot. I plan to make the most of it, learn and do the best I can for TRG in the equipment we have here.”

While Lally and his team are making the most of their opportunity, they are surely doing it on a shoe string. They currently have just two cars in their fleet, constantly keeping their fingers crossed for their equipment, as well as for some much needed sponsorship.

“This will be my first full year in Cup if we can maintain,” Lally said. “We still need to maintain and I have to do a good enough job that they want to keep me and we have to find sponsorship.”

Speaking of that all important sponsorship dollar, Lally and TRG have secured a new sponsor that joined them for the Daytona race and will be with them for a few more.

“Eco Fuel Saver, the world’s best fuel additive, came on for us at Daytona and they just signed on for five more races,” Lally said. “Hopefully we can get something sorted out real soon so we can announce full season sponsorship.”

Lally has also signed himself up this year to compete for NASCAR’s Rookie of the Year in the Cup Series. Ironically, as with last year, he is the only driver to be running for the rookie honors for the 2011 season to date.

“It’s an honor to go for such a prestigious honor,” Lally said. “But I’m not going to play it up and I’d love to have more competition than I do right now.”

Lally admits that his first two races in the elite Cup Series have been filled with challenges. At Daytona, he was running in the top fifteen before being caught up in a wreck and at Phoenix, he again was one of the unfortunates involved in that race’s ‘big one.’

“We’re looking forward to getting a good, clean one here at Vegas,” Lally said. “The harder you work the luckier you get and we’re working hard here.”

Whether lucky in Vegas or not, Lally just wants to make his NASCAR dreams come true.

“If I can keep on going and at least make a name for myself working real hard and trying to go fast, then wonderful,” Lally said. “I’d love to stay here.”

“This means the world to me,” Lally said passionately. “I know we are the Davey in the David and Goliath story right now.”

“That’s how a lot of my opportunities have come down and I’ve been able to make the best of it,” Lally said. “I’m going to try to make this another one of those stories.”