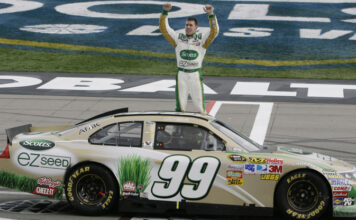 On the final round of pit stops under green, Carl Edwards took two tires and that was the call of the race as he went on to win Sunday’s Kobalt Tools 400 at Las Vegas Motor Speedway.

“The key to winning today is my team,” Edwards said. “This Ford team is unbelievable. Everybody at Roush Fenway is great. It’s unreal. When you’re a kid, you think it’d be great to fly a bunch of woman and drive a racecar and I did. I flew my mother, my wife and my little girl out here and here we are.” [/media-credit]Tony Stewart looked to have the win in the bag before a pit road penalty for leaving with equipment on lap 150 set him back. Stewart then took two tires on the next round of stops to get him back out front. However, that forced him to take four tires on the last round of stops while Edwards only took two. As a result, Stewart finished second.

“It was a good day,” Montoya said. “We were a little bit off the pace. I thought we were closer. To get a top five at Vegas after what has happened the last few years here is amazing. This is amazing. We changed some guys on the pit crew and they did an amazing job.”

Marcos Ambrose got his first top five for Richard Petty Motorsports as he finished fourth after running up front consistantly all day.

‎”Well, I think I can keep my jobs for a couple more weeks,” Ambrose siad. “Was real tight all day – first top five for RPM. Just got to thank Richard Petty for believing in me and giving me a shot. Todd Parrot is awesome on the pit box. Pit crew was good with pit stops.”

Hometown hero Kurt Busch was hoping to get a win, though found himself spinning around on lap 102 and fighting back the rest of the race.

“Yeah, we gave it all we had and the crew chief made a real good call to get us upfront there,” Busch said. “I wanted to get up there a little more than I should to lead for the hometown crowd, but you can’t do it. You got to race these races smart. We got in there and had Montoya on the outside and just spun around.”

The finish has Kurt Busch tied for the points lead with Tony Stewart.

His brother Kyle Busch had a rougher day as he had a flat tire on lap 95 and then blew up on lap 108.

“Its really unfortunate,” Busch said. “We had a really good racecar. Unfortunately, you get within a five car length cushion and can’t close anymore. The car was running awesome before that and we had that tire go down and go us behind. Lucky for us we got the lucky dog and we were going to work our way through traffic and kablewy, it just broke.”

The marks the third engine problem for Joe Gibbs Racing in two weeks as Joey Logano blew  up last week while Denny Hamlin changed engines before the race.

Busch wasn’t the only one with a motor issue as Regan Smith blew his motor on lap 86.

Motors weren’t the only issue during the race as a lot of drivers suffered flat right front tires. Last week’s winner Jeff Gordon was one of those as he blew a right front with 74 laps to go.

“There was no sign whatsoever,” Gordon said. “We needed to free the car up and nothing we seemed to be doing was helping it. The day started off pretty good, way better than I thought we were going to be considering practice. Those last few runs we started to lose the handle and fall back and when I went in there, no warning. I was just glad that I had a safer barrier to hit.”

“Its tough,” Gilliland said. “We were running good today. We had a good car. We learned a lot of stuff with the mile and a half stuff. We’re still going to take a positive out of this and head to Bristol as we ran good there.”