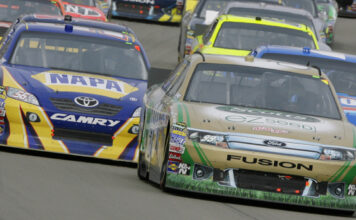 Viva Las Vegas! Sunday was a strong showing by the Sprint Cup boys. It wasn’t spectacular. It wasn’t boring. It was steady and strong racing. There were surprises. There were finishes that were expected. But the biggest surprise was probably the strong and dominating performance by two time series champion, Tony Stewart.

[/media-credit]Going into the day, the odds on favorite was Matt Kenseth whose record setting qualifying lap was followed up by blistering fast practice speeds. Virtually all of the odds makers chose drivers of blue ovals to dominate and win the race.

When the green flag dropped nothing could have been further from the truth. A Chevy bowtie lead the way for 163 laps with Tony Stewart showing the prowess he is known for in the cockpit of about anything with wheels. But a pit stop mistake, when an air hose curled, causing him to remove equipment from the pit box and then a late race 4 tire change would relegate the champ to a 2nd place finish.

Carl Edwards was lurking. All day long he was lurking. He showed strength and speed at times but never quite showed his hand. He stayed just close enough to stay in touch with the leader. He could see him. He could watch him. He was at times faster than him. But he was bidding his time. When the final stop came, it was a two tire change and one can of fuel that would put Carl out in the lead by almost 2 seconds over the then 3rd place Stewart.

Stewart would close but ultimately finish 1.24 seconds behind Edwards and his Scotts Ford Fusion. “The key to winning today was my team,” Edwards said. “These guys are unbelievable. It means a lot coming off Phoenix. I went home last week and didn’t know how things were going to go. You don’t get a good race car like that often. We had another one today.”

A very disappointed Tony Stewart said, “We just gave it away,” he said. “We shot ourselves in the foot two weeks in a row.”

Other surprises included a fiery explosion of an engine by Kyle Busch taking him out of contention on lap 108. A blown right front tire that ended last weeks winner Jeff Gordon’s day at lap 193. Neither driver was injured.

Notable performances belonged to Marcos Ambrose who finished 4th in his Richard Petty Motorsports Stanley Tools Ford; a strong finish and the first top 5 for the Australian born driver on an oval race track.

In 10th was possibly the feel good story of the day, Brian Vickers. After having to lay off most of last year with blood clots and heart surgery, Vickers finished a strong 10th.

Once again, the National Guard Chevrolet of Dale Earnhardt Jr. turned in a very strong and promising performance. After starting the race in the 30th position, Earnhardt Jr. rallied to an 8th place finish and showed signs of breaking out of the slump that has claimed him since June of 2008. Earnhardt Jr., who hadn’t posted back to back top 10 finishes since July of 2010, stated his run was the first time in a long time in which he felt he could “beat the guys I was around.” It boosted his confidence – an often discussed subject for Earnhardt Jr. – and he admitted thinking that his relationship with Letarte was somewhat of a last chance.

“Failure at this point is completely unacceptable,” he said. “I’ve got to put it all out on the line to make this work, because if it don’t work with him, I’ve got nowhere else to go. I’ve got no other options, really – other than to race myself into oblivion with my own team and Tony Jr and them guys.”

The glitz and glamor of Vegas gives way to a week off for the Sprint Cup teams. And maybe it’s a good thing for some to get their tempers under control before they enter the grand coliseum of racing at Bristol. I am of course referring to the altercation between Robby Gordon and Kevin Conway. The altercation it is believed came about as a result of tensions caused by financial lawsuits on both coasts involving Gordon, Conway and Conway’s sponsor Extenze. Witness’ say the tension came to ahead Friday afternoon in the garage when Robby and Kevin came to blows physically. Although the stories vary in what actually occurred, the one thing for certain is that Conway filed a criminal complaint following the altercation and went to NASCAR. NASCAR immediately took action putting Robby Gordon on probation. It has still to be announced how long that probation will be for.

This week was not the most exciting racing we have seen. It was however steady old school racing. There were adjustments and strategies playing out all over the track. The fastest and best car didn’t win the race. But the car that did win the race wasn’t a fluke win. He was there all day. He earned it. He raced for it. And for those that worship in the tabernacle of the blue oval, it was too long coming.

Congratulations to Carl Edwards and the Scotts Fusion team of Roush Fenway Racing. Congratulations also to Mark Martin and his Turner Racing team on their NNS victory on Saturday. Also Congratulations to Danica Patrick, and her Go Daddy Chevrolet JR. Motorsports team for making history as the highest placing woman ever in a NASCAR race.