On to Bristol – Will Progressive Banking Continue to Sideline NASCAR’s Best Race? 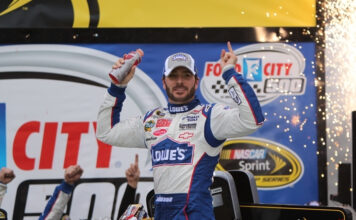 On Friday, I head to Bristol for the umpteenth time to watch short track racing at its best. I have attended every race at Bristol since 1996, and it is one of the greatest shows on the NASCAR circuit, second only to Martinsville, but it has changed over the years. The biggest change was when the changed the track in 2007 to progressive banking. This made the track, in many fans’ view, less exciting. [/media-credit]The fact was that the “old” track has just one lane around it and that resulted in what many longtime fans called “banging and beating” throughout the race. With passing being much easier, there are less racing accidents and less excitement for the fans. Those of us who are racing purists (or think we are, anyway), the extra passing was welcomed, but many fans were very upset. In fact one fan told me that prior to the reconfiguration of the track, he had no trouble getting rid of his two extra tickets. It seems that he had subscribed for four tickets in the 1980’s. Over time, his two children grew up and left home, but the two extra tickets could be sold easily because everyone wanted to go to Bristol. Not anymore. For the last eight races, he has not been able to sell his two extra tickets and has notified the track he only needs two from now on. Many blame the poor economy for this, but the evidence show maybe this is not the case.

No doubt, the economy is a factor, but the racing is part of the problem. Don’t get me wrong, I still love Bristol and all it is to the NASCAR nation, but it is obviously not the same. The question that needs to be asked is why to the powers that be feel a need to change something that is working so well? We’ve seen it at other places, and sometimes it’s successful. It’s not been successful at Bristol. As I write, tickets are still available at BMS. Stubhub.com is still filled with tickets for sale just 4 days before the race. Is it the economy or the racing? You fans have to answer that question.

I see the campgrounds with the empty spaces. I see the empty seats and I wonder. Maybe it’s the drivers. Where once Dale Earnhardt “rattled the cage” of Terry Labonte, we’ve seen races that are more like the other races at other venues. No longer does anyone dominate like a Dale Earnhardt, Darrell Waltrip or Caleb Yarborough, but is the racing worse? That’s up to you, the fan, to decide. So what is you’re your reason for not attending?

No matter what happens, progressive banking or not, I would not miss a race at Bristol. The sleepy little town is one of the friendliest places to watch a NASCAR race. Regardless of what happens, this place is one of the jewels of the circuit. It would be a shame for maybe the greatest place to watch a race to be less than capacity on Sunday, I have faith that folks will fill that stadium. And, if not, the conversation will continue. My hope is fans will fill that bowl for Sunday’s race because regardless of the changes, it still is one of the two places to watch a race. I’ll be there, will you?

Ron Fleshmanhttp://www.ris-news.com
Ron Fleshman has followed NASCAR racing since attending his first race at Martinsville Speedway in 1964. He joined the Motor Sports Forum on the CompuServe network in the 1980s and became a reporter for Racing Information Systems in 1994. In 2002, he was named NASCAR Editor for RIS when it appeared on the World Wide Web as www.motorsportsforum.com. He can now be found at www.ris-news.com. Ron is a member of the American Auto Racing Writers and Broadcasters Association. You can find Ron following and reporting on the top three NASCAR divisions each week. As a lifer in his support of racing, he attends and reports on nearly 30 events a year and as a member of the motor sports media, his passion has been racing for 47 years. He lives with his family in rural West Virginia and works in the insurance industry when not on the road to another track.
Previous articleSpeedwayMedia News and Bits
Next articleKenny Wallace Is A Changed Man