Surprising and Not Surprising: Jeff Byrd 500 at Bristol 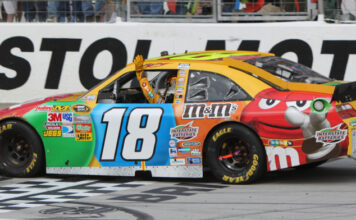 From remembering one of race fans’ best friends to the beating and banging on the track, racing at Bristol Motor Speedway is always one of the favorite destinations on the NASCAR circuit.  Here is what is surprising and not surprising for this weekend’s Jeff Byrd 500.

Surprising:  One of the biggest surprises happened before Billy Ray Cyrus sang the National Anthem and Jeff Byrd’s family gave the command to start the engines in his memory. NASCAR and Goodyear had to make a command decision, replacing the tires for the race.

Unfortunately, the original tires did not rubber up the track and in fact disintegrated instead. So, new tires were quickly ordered up from North Carolina and delivered just in time for practice and the race, necessitating a competition caution at Lap 50.

Not Surprising:  In spite of the booing from the crowd when his signature song “Rowdy Busch” was played during driver introductions, it was not surprising at all to see the broom in the hand of winner Kyle Busch at race end. This was Busch’s fifth win in a row at Bristol and he swept both the Nationwide and Cup races for the weekend.

Busch dedicated his 20th victory in NASCAR Sprint Cup competition to Toyota and all affected by the recent earthquake in Japan. The driver of the No. 18 M&Ms Joe Gibbs Racing Toyota also made history, tying driver Speedy Thompson for 33rd on the career victories list.

“This M&Ms Camry was awesome today,” Busch said. “Also, our thoughts and prayers go to the Toyota folks and all those in Japan.”

“You’ve got to be patient and sometimes you’ve got to go for it,” Busch continued. “Our guys won this race in the pits coming out first on that last stop.”

Surprising: Paul Menard continues to lead the charge for Richard Childress Racing, in spite of being the ‘new kid on the block.’ The driver of the bright yellow No. 27 CertainTeed/Menards Chevrolet even took the lead at Bristol at lap 20, positioning himself at the front for the first time in his career at Bristol.

Menard finished fifth in the race, also advancing his position in the point standings to fifth.

“I had a fast race car all weekend,” Menard said. “What’s cool is we’ve been to four different race tracks and we’ve had strong runs at all four. We’re just having a lot of fun right now.”

Not Surprising:  It was not surprising that if Carl Edwards was not celebrating a win with a back flip, he was sitting right there yet again in the runner up position. Behind the wheel of his No. 99 Scotts EZSeed Ford, Edwards admitted that he simply could not catch his Phoenix rival Kyle Busch.

“It was exciting,” Edwards said. “I thought I could get to him at the end and rough him up a little bit and maybe get by him, but his car took off.”

“It was a good race at Bristol,” Edwards continued. “Kyle did a good job. Our team did a good job. We’ve got to thank all the fans and we appreciate them coming out and supporting us.”

Surprising:  Matt Kenseth actually had a great run at Bristol and was even somewhat effusive, particularly for the usually dry driver of the No. 17 Crown Royal Black Ford. Kenseth finished fourth in the race and jumped to 13th in the point standings.

“We had a lot of fun out there racing today and got lucky and got the right lane on the restarts a few times,” Kenseth said. “It took all day but we finally were able to make some adjustments that had the Crown Royal Black Fusion pretty decent.”

Not Surprising:  To no one’s amazement, it does indeed seem that five time champ Jimmie Johnson has figured out Bristol Motor Speedway. And it was certainly not surprising to see the driver of the No. 48 Lowe’s/Kobalt Tools Chevrolet lead laps and get a great finish out of ‘Thunder Valley’.

While Johnson first had to overcome the driver introduction song picked out for him by Brian Vickers, the “Thong Song” of all things, the reigning champion recovered his dignity with a third place finish. Johnson also jumped five spots in the points, currently sitting in the seventh spot.

“Oddly enough, clean air is important here and that was kind of it,” Johnson said. “It came down to that last pit stop and we didn’t get out of the pits first. So, it was the rest of us racing for second, third and fourth.”

Surprising:  It was a bit surprising to see two drivers, Trevor Bayne and Jeff Gordon, both winners in the young 2011 season, struggle so mightily at Bristol Motor Speedway. After starting in the seventh spot, Gordon just could not get comfortable in his No. 24 Pepsi Max Chevrolet, finally bringing it home in the 14th spot.

Trevor Bayne, one of Gordon’s biggest fans and the Daytona 500 winner, had a miserable day at his home track. Bayne was involved in the wreck that brought out the first caution flag of the day and never recovered, finishing 34th in his Wood Brothers Chevrolet.

Not Surprising: NASCAR’s favorite driver, Dale Earnhardt, Jr. just keeps rolling along. In spite of a speeding penalty and with the encouragement of his ever optimistic crew chief Steve Letarte, Junior bounced back to finish 11th, just missing out on his third top-10 finish in a row.

The NASCAR circuit will now trek back across the country to Fontana, California. Drivers will compete in the Auto Club 400 at Auto Club Speedway on Sunday, March 27th, with the broadcasts set for  3:00 PM ET on FOX and MRN.

SM Staff
Previous article
The Last Word on Bristol, as Kyle W(inner) Busch again sweeps Tennessee
Next article
Pennzoil to be Under the Hood of Top IZOD IndyCar Series Teams