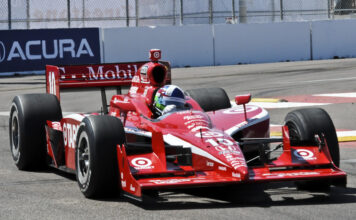 The 14 turn, 1.8 mile temporary street course would provide plenty of challenges and fast times for the 25 teams entered. The schedule for Friday would be a morning and afternoon practice session.  The morning practice saw all 25 teams on track searching for the combination of speed and handling that would put them at the top of the pack in this season opening event.

Target Ganassi Racing with Scott Dixon and Dario Franchitti looked to be ready to take the top spot and the three car team of Andretti Autosport was showing some strength also.

Mike Conway looked comfortable in his return to Indy Car after suffering severe injuries on the last lap of last season’s Indy 500, Marco Andretti was consistent and birthday girl  Danica Patrick was also running in the top ten, (Danica celebrated her birthday today and although you should never ask a lady her age, Danica smiled a little grin, and said “29”). [/media-credit]Ryan Hunter-Reay would top the morning practice session with a lap just under one minute and four seconds . This morning session ran without incident and although a few teams were scratching their heads trying to figure out this tricky street course, all indications are this will be one of the most competitive fields in the 7 year history of this event.

The afternoon session saw a number of drivers taking their turns at the top of the speed charts; Marco Andretti was quick, along with Will Power. Tony Kanaan looked good in his new ride. Ryan Brisco, Justin Wilson, Alex Tagliani all showed signs of being very fast. Danica remained in the top ten, but at the end of the day it was Dario Franchitti that would be the quickest. “This is good for our team, and we hope to be able to carry this into our qualifying tomorrow” Dario said.

The afternoon session saw the car of E.J. Visio get off course, and damage both ends of the race car, the team thinks they can repair the car, and should not need to use a back up. Minor spins by Sebastien Bourdais, and Oriol Servia also slowed the action.

Activities continue Saturday with a final practice session in the morning followed by qualifying and the Firestone fast six to determine Sundays pole position.