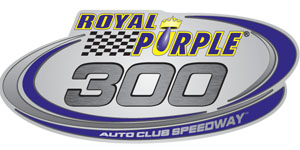 SAN BERNARDINO COUNTY, Calif.  (March 24, 2011) – Howie Mandel, judge of “America’s Got Talent” and host of game-show “Deal or No Deal” will serve as Grand Marshal for NASCAR’s NNS Series race – the Royal Purple 300 – at Auto Club Speedway on Saturday, March 26.

As Grand Marshal, Mandel will give the most famous command in racing, “Gentlemen, Start Your Engines.”  The NASCAR NNS Royal Purple 300 will be televised at 2:30 p.m. PT on ESPN.

Mandel is the host and executive producer of the upcoming Fox special MOBBED, an unscripted show that puts a hidden-camera spin on the “flash mob” concept. And, this summer he returns as a judge on NBC’s hit talent competition series “America’s Got Talent” alongside Sharon Osborne and Piers Morgan. Mandel recently received an Emmy nomination for “Outstanding Reality/Competition Host” for “Deal or No Deal” and a Daytime Emmy nomination for “Outstanding Game Show Host” for the syndicated version of the show.

Mandel’s versatile career has encompassed virtually all aspects of the entertainment spectrum, including television, film and stage.  From his work on the Emmy-Award winning “St. Elsewhere,” to the international animated children’s series “Bobby’s World,” Mandel has become a mainstay of the American comedy scene. In 2009, Mandel added another title to his resume, author, when he released his frank, funny, no-holds-barred memoir Here’s the Deal: Don’t Touch Me.  The memoir that revealed his ongoing struggle with OCD and ADHD–and how it has shaped his life and career made the New York Times Bestseller list on its first week and remained on the list for several consecutive weeks.

To see Howie Mandel live at Auto Club Speedway, tickets to the Royal Purple 300 NNS race on Saturday, March 26 start as low as $30 and AAA members receive Show Your Card & Save discounts.  For more information or to purchase tickets call 800-944-RACE (7223), log on to www.autoclubspeedway.com or visit the Auto Club Speedway ticket office.

Auto Club 400 tickets start at $35 and AAA members receive Show Your Card & Save discounts, including a special section with half-priced tickets for kids 12 and under.

And don’t forget children 12 and under can sign up for the FREE Auto Club Speedway Lefty’s Kids Club membership to receive FREE admission on Friday and Saturday.