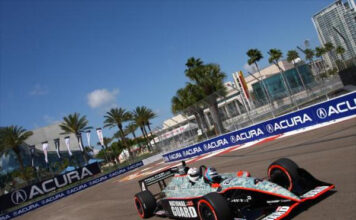 Following a five-month offseason break, the teams and drivers of the IZOD Indycar Series are ready to begin the 2011 campaign on the streets of St. Petersburg, Florida. Unlike last year’s event that was postponed by one day due to torrential rainfall, weather is not expected to play a role in the outcome this year as conditions are expected to remain consistent with temperatures staying in the 70 to 80 degree range throughout the weekend festivities. [/media-credit]In the time between last season’s closer in Miami to this weekend, the full-time field landscape has changed somewhat with twenty-five car and driver combinations in play, but with a few that may be added in as the series moves closer to its marquee event, the 95th running of the Indianapolis 500-mile race in May.

With that in mind, here’s how the field looks for this weekend’s season opener.

Will Power- The former Formula One test driver has been the best on the twisty circuits over the past twelve months, including victory in last year’s Honda Grand Prix of St. Petersburg, in which he led 50 of the event’s 100 laps, after starting from the pole. Proved he is still among the best on these courses by running near the top of the time sheets during the Barber Open Test earlier this month.

Helio Castroneves- Consistently at the top of the time sheets throughout the Barber Open Test, Castroneves has earned two victories at St. Petersburg (2006, 2007) and finished fourth in last year’s race. Helio is as good a candidate for victory as his teammate Power.

Ryan Briscoe- This weekend begins an important season for Briscoe, who was consistently behind his two teammates during the 2010 season, particularly on road and street courses. Won here in 2009, and was in contention to win here as a rookie in 2005 until he found the tire barrier late in the race.

Dario Franchitti- A series champion in each of the last three seasons he has participated in, yet he has not won here at St. Petersburg, with a pair of thirds as his best results. However, he is among the best on road and street courses, having placed no worse than 7th in all but one event on these circuits last season.

Scott Dixon- The New Zealander won three times last year, but only once on the road and street courses. Dixon led the second most laps in last year’s race at St. Petersburg, before misjudging the entry to turn 9, which resulted in contact with the barriers and an 18th place finish.

Graham Rahal- The winner at St. Petersburg in 2008 finds himself in the best ride of his career in 2011, after driving for multiple teams during the 2010 season. He earned a ninth-place finish last year for Sarah Fisher Racing at St. Petersburg. Has the best chance for a breakout season

Charlie Kimball- The early favorite for 2011 Indycar rookie of the year honors, Kimball moves up to the top circuit after two full seasons in the Indy Lights Series. Was unable to win a race in either year, but he made the podium in five of thirteen starts last year, also finished fourth in St. Petersburg in the Indy Lights event last year.

Ryan Hunter-Reay- Last year’s Long Beach Grand Prix winner, earned all three of his podium finishes on street circuits last year, however he wasn’t a factor at St. Petersburg where he placed eleventh.

Marco Andretti- Last season was a year to forget for Andretti, as his top performances were on ovals. A fifth-place result at Barber Motorsports Park was his best effort in a road race in 2010, and he finished 12th at St. Petersburg.

Mike Conway- Makes his return to the series, following his nasty shunt on the penultimate lap of last year’s Indianapolis 500. Has earned all of but one of his six top ten finishes on road and street circuits, but has not finished in his two previous tries at St. Pete.

J.R. Hildebrand- The 2009 Indy Lights Series champion enters his first full season in the IZOD Indycar Series. He participated in two road races last year in Indycars, earning a 16th place at Mid-Ohio. He has had more success on the twisty circuits over the ovals, earning four of his five Indy Lights wins on road and street circuits.

Justin Wilson- Last year’s St. Petersburg runner-up is one of the mid-pack runners who may have the best chance to win this weekend. Has proven he can win on road and street circuits, having won twice, including at Watkins Glen in 2009 for Dale Coyne Racing.

Ana Beatriz- Popular Brazilian begins her first full IZOD Indycar Series season this weekend. She was a contender for the win in three of her four starts at St. Petersburg in the Indy Lights, with a best result of third in 2008.

Alex Tagliani- Another dark horse pick this weekend, after finishing sixth here last year and running amongst the top contenders several times in road and street circuit events. Former FAZZT team should remain competitive despite the squad’s assets being picked up by Sam Schmidt.

Vitor Meira- Opened last season with an impressive third-place result at Sao Paolo, but couldn’t keep the momentum going for the rest of the season. He earned five other top ten finishes, but all of those were in oval track events.

Tony Kanaan- Finally secured a drive for 2011 last week, after leaving Andretti Autosport and seeing a potential ride with Gil de Ferran fall apart after the team shut down. He has finished no worse than tenth in any of his six starts at St. Pete, including four podium results. He is a contender for a fifth podium, if he can quickly get used to his new surroundings.

E.J. Viso- Put his stock on the Indycar radar, with an excellent fourth place result at St. Pete in 2008, however he has not factored in most road and street circuits events since then. He is not likely to factor among the frontrunners this weekend.

Takuma Sato- Ran amongst the front runners in several road and street circuits in his rookie season last year, but only garnered one top ten and several did not finish results. He can post a good result if he can reach the checkered flag.

Sebastien Bourdais- A definite x-factor after winning four Champ Car World Series titles. How competitive a car Dale Coyne can produce for him will determine how much of a threat he can be to the front runners in his road and street circuits only appearances this season.

James Jakes- Little known newcomer joins the series at St. Petersburg, after a lackluster season in the European lower ranks. Growing pains are likely for him this weekend.

Oriol Servia- Returns to full-time duty for the first time since 2008, after not running in any events last year. He finished seventh at St. Pete in 2008 and could pull a surprise if he can match the numbers posted by Newman-Haas tester James Hinchcliffe during Barber open test.

Simona de Silvestro- Promising Swiss pilot begins her second full season, which saw her best performances come on road and street circuits. Up in the air as to how she will fare at St. Pete as she was among the bottom half of the pack during the Barber open test.

Sebastian Saavedra- Colombian newcomer only placed eighth in the 2010 Indy Lights standings, but is in a car capable of posting top ten results, as Bertrand Baguette proved late in 2010.

Rafa Matos- Two-year Indycar veteran reunites with the same AFS team with which he won the 2008 Indy Lights title. The team has only made four Indycar Series starts so St. Pete will be a learning experience for them.

For those who are expecting a more competitive season, where other teams besides Penske and Ganassi are consistently winning races, that does not appear as a likely outcome for most of the races. However, with the way the driving talent is spread out there is a greater chance for surprises to occur on the road and street circuits than the ovals, however it’s not enough for one to pick a winner outside of the top two teams as the best bet to win the race. In this case Will Power is the best at road and street course currently in Indycar, and based on that, he is the logical choice for victory this weekend in St. Pete.