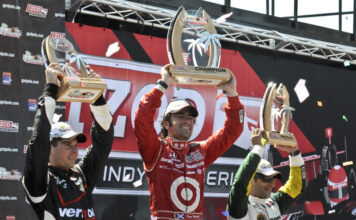 [/media-credit]Two time Indy Car series champion, Dario Franchitti got his 2011 season off to a good start with a dominating win on the downtown streets of Saint Petersburg Florida at the 7th annual Honda grand Prix. Dario had been quick all week end, posting the fastest practice speed on Friday, and qualified second for Sundays’ race. The Target Ganassi team was very optimistic about their chances with both cars starting at the front of the grid, Scott Dixon would grid just on spot behind Dario in third position. Race day would get off to a somewhat ominous start, during the morning warm up, Sebastien Bourdais, driving his backup car, after an incident during qualifying Saturday left his primary car to badly damaged to continue, clipped the inside wall in turn eleven, damaging the right side suspension, and Sebastien was along for the ride at that point. The car slammed the retaining wall in turn twelve, and came to rest against the wall just short of the entrance to turn thirteen, A small fire was evident at the back of the car but fire, and rescue crews quickly extinguished the flames, and Sebastien exited the car unharmed. This crash would force Bourdais to withdraw his entry.

As the cars were being formed up on pit road, and ABC was in the midst of their pre race show, the six vintage world war two aircraft were taking off from the only open runway at Albert Whited Airport in preparation for the fly over at the conclusion of the national anthem. As the old war birds came into formation, one of the aircraft would experience a complete engine failure, and be forced to execute an emergency landing. Unfortunately the aircraft would not make it back to the airport, and end up in the waters of Tampa Bay. Saint Petersburg fire, and rescue boat that was anchored at the Accura Yacht Club was quickly on the scene, and was able to safely remove the two man crew from the aircraft. Both men were unhurt.

The initial start of the race saw the field storm into turn one four wide, this would result in a multi car incident that would leave Marco Andretti upside down, the cars of Helio Castroneves, Mike Conway, Ryan Briscoe, and Scott Dixon heavily damaged. Andretti was done for the day. Mike Conway was also unable to continue. Ryan Briscoe drove back to his pit, but the crew was not able to get him back out and retired the car for the day.Castroneves would spend fifteen laps making repairs and was able to get back on track, the Target Ganassi crew made repairs to Dixons’ car and was able to keep Scott in the race. The race would see several more cautions early on, but settled down around lap forty. Franchitti would remain out front through these caution periods, and was never seriously challenged for the top spot.

As the race wound down Franchitti would stretch his lead to over six seconds over second place Will Power. Power, the defending race winner from last years’ race didn’t have anything for Franchitti, and settled for a very fine second place finish. Crowd favorite Tony Kanaan brought his Lotus home in third place, “Six days ago I didn’t have a job, now things seem to be working out” Kanaan said in post race ceremonies. Simona De Silvestro would finish a career best fourthTakuma Sato would round out the top five. This would give the KV Racing Technology team two cars in the top five.

As the dust settled, and the confetti flew, the seventh edition of the Honda Grand Prix of Saint Petersburg gave the race fans everything they had come to see, and left race organizers and city officials with very big smiles on their faces. Plans are already underway for the eight annual edition in 2011.