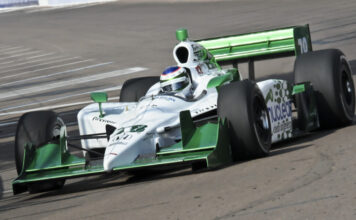 At the end of the Honda Grand Prix of St. Petersburg, Simona de Silvestro finished fourth behind Dario Franchitti, Will Power and Tony Kanaan.

In the final laps, she tried to make the move on Kanaan for third, though could not complete the pass. [/media-credit]”We kind of battled like the last 15 laps to get in,” she said. “You know, it was kind of a high risk to try to pass him because it was so dirty on the inside of [turn] one. I had one shot that I think I could have made it, but I almost overshot it. So I think I’m really happy with fourth because we started 17th.   And, with how we started the weekend, it wasn’t how I would thought we would end the race here. You know, I’m just really happy with my new engineer. We started working together on Friday, and to be running fourth today is something pretty special.”

Silvestro started the race with a new engineer after her previous engineer left the team, so there was extra grastification in getting a top five finish.

“It’s huge. Like I said, I never thought on Friday that we would be running so well during the race,” she said. “We were keeping up with the leaders, and my new engineer….. communication in the beginning was pretty tough because I never worked with him. But this morning it seemed like it really clicked and we really tried to figure it out. It was a tough moment for the team last weekend. We were scrambling to try to find a new engineer, and I think we made the right choice. Brent Harvey is pretty awesome. When he talks to me on the radio, he’s really calming me down, so I think we’ll make a good team.”

Part of getting that communication with Brett Harvey involved having to make some final changes to the car following the morning warm-up.

“We struggled with the new tires with our car,” she said. “We couldn’t quite figure it out, and then this morning we pretty much changed a couple of things on the car and suddenly it was there. I finally had the feel for the car.

“And I think it was mostly the communication between my engineer and me that started to click this morning. Before, he was trying to understand me, I was trying to understand him. And for me, it always has been a big part of it – for my engineer and I to have really great communication. And, this morning, I thought, “okay, that’s what we are going to do,” and it just kind of went in the right direction.”

If given a couple more laps, Silvestro says she may have been able to get by Kanaan.

“I definitely had a couple of boosts left,” she said. “Maybe I should have used one a little bit earlier, but I got close to TK a couple of times because he was making a couple of mistakes. But, like I said, it was really risky to try to make the move. I was running fourth and I never really quite got the shot that I was next to him. I didn’t take any crazy chances to ruin our race because the [race to the] championship is really long.”

Right off the bat, she had to work hard for her position as with starting back in the pack in 17th, she had to avoid the first lap wreck that involved Marco Andretti, Helio Castroneves, Mike Conway, Ryan Briscoe and Scott Dixon.

“I started way back, so I couldn’t see anything really because there was so much dust,” she continued. “But, I kind of made it through. And, I think I saw Marco – I saw a car kind of going up in the air.  I tried to find a hole and I did. I came out in ninth position, so I think I made the right move. Maybe I was a little bit lucky, also, through turn one at the start of the race.”

IndyCar put forth a new rule this year to start each race with double-file restarts, which made the race interesting for Silvestro near the end.

“I got the inside and pretty much everybody kind of came down on me and I had nowhere to go,” she said. “I kind of made a little bit of contact with Will because I was pretty much on the rumble strip.  But I thought the double‑file restarts were pretty fun because it actually gave us a chance to actually make positions.   Last year, we would start single file every time, it would be hard. You would be just following the leader. I think it [the restarts] made it exciting and I really enjoyed it.”

With this being her best career finish, she includes this race in her career highlights, along with making the Indy 500 last year.

“Today is definitely going to go right up there, because I think it was one of the best races I’ve done,” she said. “I didn’t really make many mistakes and I really liked that. Being a female driver, I really get along with Danica, but it’s not like we compare notes or anything. I think she’s doing a great job.   At the end I think we are just here to try to beat every other driver.”

This also marks a big moment for the entire team as they are considered one of the smaller IndyCar teams.

“I think even last year when I was racing there, we struggled towards the end to get the sponsorship together,” she said. “But he worked hard and he has a great group of people on the team. They are like a big family. It’s a pretty small team but we really get along really well. And my manager, Imran Safiulla, put the whole Nuclear Clean Energy deal together. Those folks are going to be with me for the next couple of years.

“I’m really lucky; not many drivers have this opportunity. And, with an industry like this supporting and choosing you as a spokesperson, it’s something pretty special.”