The Final Word as Harvick beats Jimmie at Fontana, but Martinsville promises to be a very different story 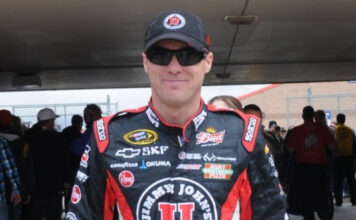 [/media-credit]So, what did we learn from Fontana?

Well, we learned that those we had watched up front most of the day were not destined to finish up there. Kyle Busch? Nope, he was third. Tony Stewart? Nah, an unlucky 13th. Denny Hamlin? Sure, he led 15 laps but then his engine started to let loose and 39th was his fate. I could mention J.J. Yeley, who led for two but wound up 41st…but I won’t.

We learned that when you take the lead for the first time in a race as you are coming to the finish, you end up with more points than any of those other guys. Kevin Harvick gave Jimmie Johnson a wee love tap, then charged to the outside of his rival to claim the bubbly. Anyone else notice those mega-cans of suds in Happy’s hand in Victory Lane? Life is good with Budweiser as your sponsor.

We learned that skipping the pits on a caution can do good things. Stewart stayed out, caught a later caution as he was getting down to fumes in the tank, and managed to stay up there almost until the end. Too bad about his coach turning into a pumpkin as the race reached midnight, but at least he had his happy face on for a while. Stewart wasn’t wearing it after the race, however, as he skipped the post-race interviews.

We learned that sometimes even tracks better known for putting one in a coma can provide some pretty good entertainment. Eight stayed out under caution with ten to go, and six of them finished in the top eight. Matt Kenseth slipped on a fresh set of skins, and moved up five spots to wrap up the day in fourth. While Harvick moves to ninth with the win, Kenseth is now in that all-important tenth spot in the standings.

We learned that by finishing sixth, Carl Edwards takes first place. He is nine spots up on Sunday’s fifth place guy, Ryan Newman, ten ahead of Kurt Busch, 11 ahead of Kyle, and 14 up on Johnson. That will change, as Martinsville is not exactly one of his favorite tracks, with no wins, but he finished 8th in both races held there in 2010.

We will learn that if Edwards is going to be challenged next week, it won’t be by Newman. He is winless at the Virginia track, while Kurt Busch did win there, once, in 2002. He hasn’t a Top Ten there since 2005. Kyle Busch, a winner almost everywhere, has never won in anything at Martinsville. Four times he has been fourth, five times outside the Top Twenty, three times somewhere in between.

You will learn that the points leader after next week likely will be a certain Mr. Johnson. Six Martinsville wins, 17 straight Top Ten finishes there, with an average finish of between third and fourth since he finished 35th in his first race there way back in 2002. Yes, Virginia, there is a Jimmie Johnson, and he’ll remind you of that fact when the action heats up again this Sunday.

Enjoy your week. I’m sure Five Time will be enjoying his.

Ron Thornton
A former radio and television broadcaster, newspaper columnist, Little League baseball coach, Ron Thornton has been following NASCAR on this site since 2004. While his focus may have changed over recent years, he continues to make periodic appearances only when he has something to say. That makes him a rather unique journalist.
Previous articleCalifornia Dreaming or was it a nightmare?
Next articleSurprising and Not Surprising: Auto Club 400