David Ragan: Record Setter, Shriner and Driver in Search of a Good Finish 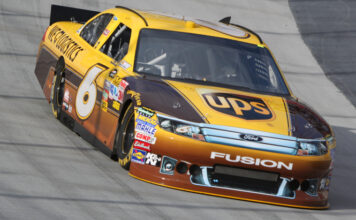 Driver of the No. 6 UPS Ford for Roush Fenway Racing David Ragan is a man of many talents, from setting a world record to pursuing the status of Mason and supporting the Shriners Hospitals for Children. [/media-credit]But most of all, Ragan is a driver in search of a good finish, one that seems to be so elusive early in his 2011 NASCAR Cup season. Yet in spite of that, he is managing to not only keep the faith, but keep it all in perspective.

Two weeks ago after the race at Bristol Motor Speedway, Ragan had the distinction of breaking a world record on the very track on which he had competed in the Cup Series. Ragan scored the fastest lap for a passenger car around the world’s fastest half-mile race track.

“I drove the production Mustang and we broke the world half mile speed record,” Ragan said. “It was pretty cool.”

In addition to being a world record setter, Ragan has also devoted himself to supporting the causes of the Shriners, especially the Shriners Hospitals for Children. Ragan has supported this as his charity of choice since 2008.

Ragan took time out of his hectic schedule prior to the racing at Auto Club Speedway this past weekend to visit the Shriners Hospital for Children in Los Angeles. Ragan toured the facility and also had plenty of time to interact with some of the children recuperating at the hospital.

“Anytime we get to visit a hospital, that’s cool,” Ragan said. “We get to meet a lot of the patients and the families and the whole staff. It’s neat to show them our support.”

“Some of the kids had bandages or prosthetic arms,” Ragan shared. “Just to spend a little bit of time with them was awesome.”

Ragan also has his sights set on becoming a Shriner himself. He has currently completed the first degree of Masonry.

“My uncle is a Shriner and we are close friends with many Shriners,” Ragan said. “The Shriners have just stood out, especially with their treatment of kids for free of charge.  It’s just a really good group of people who are passionate about what they do.”

Most of all, however, David Ragan is in search of a good finish to a race in this 2011 season. It all started at the first race of the season, the Daytona 500, where Ragan was black-flagged for changing lanes before crossing the start/finish line during a second green, white, checkered finish.

After serving the stop and go penalty, Ragan restarted 15th and could only rally his car to finish 14th.

At the second race in Phoenix, Ragan again had a fast race car, with the third fastest time in practice and qualifying 11th. The driver first got caught up in a wreck and, after recovering from that, blew a tire and hit the wall, ending his day with a 36th place finish.

At the season’s third race at Vegas, Ragan was once again fast in practice, in fact second fastest. When it came time to qualify, however, Ragan spun on his time trial run, relegating him to start the race from the rear of the field.

Ragan battled a loose race car throughout, ending the race in the 22nd position.

Ragan qualified fifth for the next race at Bristol Motor Speedway. Believing that this was finally a track where he could rebound, the driver was definitely looking forward to a decent finish.

Alas, it was not to be yet again. Tire troubles plagued all of the teams at Bristol, including Ragan’s, who struggled mightily on the new tires.

The UPS Ford team finished the competition at ‘Thunder Valley’ in the 16th spot.

This weekend, buoyed by his visit to the Shriners Hospital for Children, Ragan was ready to take on the big, wide track at Auto Club Speedway in Fontana, California. Ragan had a great qualifying run, scoring sixth in the time trials.

Ragan also won final practice and looked to be poised for that elusive good finish. His team kept tuning on his car, yet it kept vacillating between too tight and too loose conditions.

“We just made adjustment after adjustment and never could make it right,” Ragan said. “There at the long part of the race when we had some clean traffic, we were trying to tighten the car up because it was too free.”

“Then when we got into traffic during those last few restarts with all the dirty air, our UPS Ford just got too tight,” Ragan continued. “You know, me and Drew (Blickensderfer) and our team engineer have just got to sit down and take a look at the adjustments we made and see where we can make it better.”

“I think we had an opportunity to finish better than we did.”

David Ragan, record setter, Shriner and driver in search of a good finish plans to take his quest next to the short track in Martinsville. Yet he is still managing to stay upbeat, keeping it all in perspective, especially after his visit to the Shriners Hospital.

“We often think our lives are hard and we have a lot of pressure on us to win races or to make up points, but then you see an eight year old girl who was in a fire and half of her body is burned and she doesn’t have an arm,” Ragan said. “And yet she is there and she is recovering.”

“That puts things in perspective.”