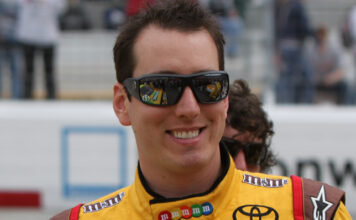 1. Kyle Busch: Busch led 151 of 200 laps at Fontana, but couldn’t hold off the late charges of Jimmie Johnson and Kevin Harvick. Johnson passed Busch with two laps to go, while Harvick slid by the No. 18 Toyota a lap later. Busch finished third, narrowly missing another weekend sweep after taking the Nationwide and Sprint Cup races at Bristol a week earlier.

“I’m disappointed we didn’t win,” Busch said, “but I can’t complain about a finish. Nor can Denny Hamlin, because he didn’t have one to complain about. I’ll send Denny my condolences via Federal Express, to his new address at the corner of Start and Park. But it’s concerning when engine woes become engine ‘whoa’s.’ Apparently, the engine shop has some bugs to work out. Fans of AMC’s infamous 1970’s subcompact car will be thrilled to hear this, but it seems that Toyota is now making Gremlins.”

I led ¾ of Sunday’s race, so, for 151 laps, I did what everyone expects of Kyle Busch, and that’s to ‘show my behind.’ That’s called giving the rest of the field a view of the ‘tail end of the lap leader.’”

2. Carl Edwards: Edwards finished sixth in the Auto Club 400, posting his fourth top-10 result of the year. It was a solid finish for Edwards, albeit a disappointing one at a track on which he’s consistently been competitive, and gave him the lead in the Sprint Cup point standings. Edwards leads Ryan Newman by nine points.

“Kevin Harvick wasted no time in passing Jimmie Johnson,” Edwards said. “I hear they’re calling it ‘The Pass.’ And, they’re calling my failure to overtake Kyle Busch at Bristol ‘The Passive.’”

3. Jimmie Johnson: Johnson overtook Kyle Busch on lap 199 in the Auto Club 500, only to see Kevin Harvick slip by on the final turn, stealing the win from Johnson, who had won five times previously at Fontana. Johnson’s runner-up finish advanced him two spots in the Sprint Cup point standings to fifth, 14 points behind Carl Edwards.

“I guess Jimmy John’s does deliver,” Johnson said, “because I got ‘served’ by Kevin Harvick in the No. 29 Jimmy John’s Chevy. Harvick gave me something to think about, so I guess that makes it ‘food for thought.’ I wonder if he accepts tips. If he does, I’ve got one for him: It happens, but it won’t happen again.”

But does a last-lap pass make Harvick a contender for the Cup? Not in my eyes. I’ve got five Cup titles propping me up. My lovely wife has one ‘ring’ finger; I’ve got five. My three biggest rivals, Harvick, Kyle Busch, and Carl Edwards, have none. So, until something changes, I’m playing ‘ring around the posers.’ If they want to prove something to me, then they should improve.”

I’ve got the field right where I want them. I’m fifth in the standings, and you know how my competitors hate to hear the words ‘fifth’ and ‘Jimmie Johnson’ used together.”

4. Kevin Harvick: In fifth with nine laps remaining, Harvick blasted to the front in the final two laps, gaining Jimmie Johnson’s bumper before sling-shotting by the No. 48 in turn 4. Harvick posted his first win of the year, beating Johnson by a .144 margin.

“I hope this win reaffirms my commitment to dethroning the five-time defending champion,” Harvick said. “I’d like to think I’m seen as a legitimate threat, and I hope that when the No. 29 Chevrolet with ‘Jimmy John’s’ on the hood appeared in Jimmie Johnson’s rear-view mirror, he saw a little bit of ‘himself’ out there.”

5. Ryan Newman: Newman finished fifth at Fontana, posting his third top-5 and fourth top-10 result of the year, as the Stewart-Haas Racing duo was again strong. Teammate Tony Stewart finished 13th  after spending much of the day in the top 10. Newman moved up two spots to second in the point standings, and trails Carl Edwards by only 9.

“I think Stewart-Haas may be the strongest team in NASCAR right now,” Newman said. “Tony and I are talented drivers, and we’re not afraid to say or do whatever necessary to get our point across. You could say Tony and I have and make a formidable pair. And my engineering degree from Purdue University makes me the ‘dynamic’ of the ‘dynamic duo.’ As for Tony, he adamantly disavows any accusations that he’s ever matriculated in his life.”

6. Kurt Busch: Busch started 23rd in the Auto Club 500 and gained little ground throughout the duration of the race. The No. 22 Dodge, bearing Auto Club sponsorship, started tight, and the “Double Deuce” never found a remedy despite multiple adjustments. Busch fell from the lead in the point standings to third, ten points behind Carl Edwards.

“We were stuck in the middle of the pack all day,” Busch said. “Had we been sporting our usual sponsors and paint schemes, it would have been fitting to call us ‘Shell stationary.’”

7. Tony Stewart: Stewart ran among the leaders all day at Fontana, chasing front-runner Kyle Busch, who led 151 laps, for much of the race. However, after the final restart, Stewart’s No. 14 Office Depot Chevrolet faded, and he finished a disappointing 13th. He dropped two spots in the point standings to sixth, 17 out of first.

“We’ve been fast all year,” Stewart said. “We’ve led laps, and we’ve made the right pit calls. We’ve done everything but win. Someone once said, or some someone once misquoted me in Rolling Stone as saying, “Racing is a lot like a visit to the massage parlor—it’s a lot better when there’s a happy ending.”

8. Paul Menard: Menard scrambled to a 16th-place finish in the Auto Club 400, with tight handling conditions spoiling his chances for a result in the top 10. Menard’s No. 27 Serta/Menard’s Chevrolet stood in ninth for a restart with about 25 laps remaining, but quickly dropped to 16th as the handling deserted him. He fell further back before the race’s last restart,

“Despite a lackluster finish,” Menard said, “I’m still proud of my position in the Sprint Cup point standings. I don’t think anyone expected me to be seventh in the points after five races. And, with Serta sponsorship on my car, you could say I’m a real ‘sleeper.’ Apparently, it was enough to wake up my RCR teammates, who’ve been sleeping on the job.”

9. Matt Kenseth: Kenseth finished fourth in the Auto Club 400, registering his second top-5 result of the year. He’s charged back from a slow start to the season with two consecutive 4th-place finishes, and is now 10th in the point standings, 30 out of first.

“Carl Edwards has assumed the Sprint Cup points lead,” Kenseth said. “He’s become the unquestioned leader of Roush Fenway Racing, but that doesn’t mean his teammates like it. I like to say he’s the ‘face’ and the ‘ass’ of Roush Fenway.”

Now, as NASCAR’s unofficial spokesman for bland and boring, and the lead singer of the Mötley Crüe cover band ‘Mätt-ley Crüe, a band known for the hit ‘Mild Side,’ I’m compelled to comment on Sunday’s race. It was 197 laps of low drama, followed by three laps of melodrama. For the first 197 laps, the Auto Club 400 should have been called the ‘Auto Pilot 400.’”

10. Kasey Kahne: Kahne posted his third top-10 finish of the year with a ninth at Fontana, backing up an identical ninth at Bristol a week earlier. After a 25th at Daytona, Kahne hasn’t finished outside the top 15, and is now 11th in the points, 30 out of first.

“I guess it’s true what they say,” Kahne said. “Red Bull does give you wings, because I’ll be taking flight from Red Bull to Hendrick Motorsports at season’s end. It’s common knowledge that when I sign a contract, it’s often scored by the sound of the Beatles ‘Hello Goodbye’ playing in the background.”

Jeffrey Boswell
Previous article
NOTES FROM THE NASCAR NATION: DALE JR IS A DIE HARD ‘GAMER’ BUT DON’T ASK HIM TO JOIN YOU ON THE ‘SOCIAL NETWORK’
Next article
David Ragan: Record Setter, Shriner and Driver in Search of a Good Finish