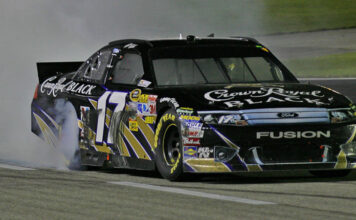 [/media-credit]With the honors of hosting the first night race of the 2011 season, here is what was surprising and not surprising in the Samsung Mobile 500 at Texas Motor Speedway.

Surprising:  Although Matt Kenseth was dominant for most of the race, when the checkered flag flew for him, the usually stoic driver of the No. 17 Crown Royal Black Ford for Roush Fenway Racing was surprisingly emotional.

“After two years, I didn’t know if I’d be back here,” Kenseth said in Victory Lane. “I’ve been so blessed in my life with a beautiful family, a great team and I do what I love for a living.”

“I haven’t had something like this for a long, long time,” Kenseth continued. “I have lost a lot of close ones at this track. It feels good to be able to close it out.”

Kenseth’s win ended a 76-race drought dating back to his win on February 22, 2009 at Auto Club Speedway in Fontana, California. This was Kenseth’s 19th career win.

Not Surprising:  From his 29th starting position, it was not surprising that Kevin Harvick just could not continue his consecutive win streak this weekend at Texas.  The driver of the No. 29 Budweiser Chevrolet was entangled in a pit road problem early in the race from which he never recovered, finishing 20th.

“Our first two pits stops pretty much ruined our day,” Harvick said. “The 00 and 20 wrecked in front of us trying to leave pit road, so we had to stop, back up and move around them.”

Surprising: Speaking of those pit road incidents, it was surprising just how influential pit road problems were during this race. On the first stop with everyone in the pits, it looked more like bumper cars than the usually smoothly choreographed tire changes and refueling.

Both David Reutimann and Joey Logano sustained damage on pit road due to collisions and Dave Blaney got his No. 36 Accell Construction Chevrolet completely turned in the wrong direction due to a spin into his pit stall.

One of the costliest pit road problems, however, was the too fast entering speeding penalty that was assessed to Tony Stewart late in the race.

“Sorry, I knew I did it,” Stewart told his crew after being advised of the penalty on lap 276 of the race. Prior to the penalty, Stewart had overcome a collision in the pits at lap 11 to lead twice in the race for a total of 12 laps.

“You know, it took almost the whole race to crack the top-10, so to be in the position we were in there at the end, I guess is a good thing,” Stewart said. “But when you’re in that position and you can’t capitalize, it’s pretty frustrating. Speeding on pit road didn’t exactly help the cause either.”

Not Surprising:  Just as in the Nationwide race, the race was relatively clean and green. The only major crash again involved Martin Truex, Jr., who for the second week in a row hit the wall hard. This time instead of Kasey Kahne buffering his hit as at Martinsville, Truex, Jr. took innocent bystanders Mark Martin and Regan Smith with him for a wild TMS ride.

“I’m OK,” Mark Martin, driver of the No. GoDaddy.com Chevrolet, said. “I didn’t see the pile up in front of us. Just racing.”

“Unfortunate deal for the NAPA Toyota,” Truex, Jr. said. “We were struggling but we were running our butts off.  Once you make mistakes and you get desperate, you just get yourself in trouble.  It sucks having this two weeks in a row.”

Surprising: Texas Motor Speedway may just be the surprising turning point for young Roush Fenway driver David Ragan. After qualifying well and being in position to even win in several of the past races, Ragan, who started the Samsung Mobile 500 from the pole position, finally got a good finish.

Ragan brought his No. 6 UPS Freight Ford to the checkered flag in the seventh position. His top-ten finish also moved him up to 17th in the point standings.

Not Surprising:  Just as the Fords were strong all day at Texas Motor Speedway, claiming five of the ten finishing spots, Carl Edwards in his No. 99 Scotts Ford proved his ‘Iron Man’ status yet again.

Edwards overcame stomach problems to finish in the third position and claim the points lead in the process. The driver blamed his physical ailments on a new rice and bean dish that his mother had cooked for him prior to the race.

“I’m all hopped up on Pepto Bismol,” Edwards said in the media center after the race. “I hate to throw my mom under the bus but she cooked something last night that I don’t think was too good.”

Surprising:  Behind the wheel of the No. 9 Stanley Ford, Marcos Ambrose had one of his best oval track efforts in his career, finishing sixth. This was the second top-ten finish on a mile and a half track this season for the Richard Petty Motorsports ace from down under.

“I’m very proud of the Stanley boys for putting together this result,” Ambrose said. “We’re starting to really click on these intermediate ovals. It’s great to be running out in the front of the pack and it gives us a lot of confidence moving forward,”

Not Surprising: Dale Jr. had yet another consistent run and finish. The driver of the No. 88 Amp Energy/National Guard Chevrolet gained the most positions in the race and finished in seventh.

Most impressive is his continuing climb in the point standings, this time gaining another two positions to claim the sixth spot as a result of his top-ten finish. Junior is no doubt looking forward to next weekend’s race at Talladega Super Speedway, where he is not only wildly popular but also has outstanding plate racing skills.

SM Staff
Previous article
Matt Kenseth goes from knocking on the door to kicking it down in Texas
Next article
Track Trash: Alone Star in Texas