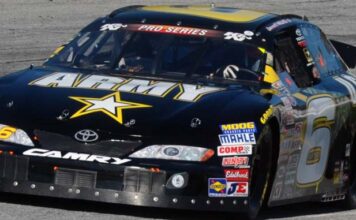 For the second K&N Pro East race in a row, Darrell Wallace Jr. and Revolution Racing are in victory lane as Wallace Jr. won the Blue Ox 150 at Richmond International Raceway.

“It means a lot winning at a big track,” he said. “Brett Moffitt and Ryan Truex did it last year. We’re in denial right now. I want to thank Max Gresham for running me clean. I got loose off of the turn there and he ran me nice and clean. I saw that he was tight off of two and snapping two and I was able to get back by him. We raced side-by-side there and that’s what its all about. I was scared on the restart as he knows how to race on them, but we were able to hang on.”

Before the red flag on lap 29 for rain, Wallace Jr. found Gresham’s weakness so once the green flag came back out, Wallace Jr. chased Gresham down and passed him on lap 56.

With three to go, Gresham fell back to fourth as he was passed by Brett Moffitt for second and then Corey LaJoie for third.

“It was very difficult at the end of the race, especially when you’re trying to pass people,” Moffitt, a  development driver for Michael Waltrip Racing, said afterwards. “We weren’t where we needed to be, but by the end of the day we got the car pretty good. It’s[media-credit name=”Sara D. Davis/Getty Images” align=”alignright” width=”300″]

[/media-credit]really about digging deep and seeing what we needed to do with it. It’s great to come back and run up front and finish second.”

Besides the caution and red flag for rain, there was only one other caution with 28 to go when Ryan Gifford spun in turn two. Travis Pastrana also found the wall with 16 to go, though made it back to pit road before bringing out the caution.

The next race for the K&N Pro East Series is Iowa Speedway on May 21st for the East-West Combination Race pres. by Tompkins Industries.