Chase Elliott Competes With The Big Boys For A Good Cause 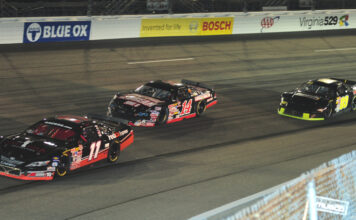 Chase Elliott, son of Cup champion Bill Elliott, was prepared to race at Richmond International Raceway in the K&N Pro Series East Race for the first time in his young career.

But the youngster got the chance to do something even more special, compete with the ‘big boys’ of the racing world at Denny Hamlin’s Charity Race, the Denny Hamlin Shootout.

Elliott was tapped to drive Brandon Butler’s Late Model, filling in for Kasey Kahne who is still recovering from additional knee surgery.  The up and coming driver not only got to compete against some of his idols, like Hamlin, Tony Stewart, Michael Waltrip and newcomer Travis Pastrana, but also got to challenge his own dear old dad.

Because of his inexperience, having never even competed in a Whelen All-American late model race car before, Chase Elliott started in the back of the field just behind father Bill.  This starting position turned out to be one of the luckiest as much of the field was involved in a major crash in the first lap of the race.

While Chase went low to escape the wreck, right behind his father, Bill Elliott did get clipped from behind, doing major damage to his race car.

“I thought I was a goner when they were barreling down from the wall,” Chase said to his dad. “But they hit you instead.”

“Well I’m glad I could be of assistance to you there, son,” father Bill Elliott quipped quickly.

After the major wreck, Matt McCall and Max Gresham brought the field to the restart green flag.  They were quickly challenged by Cup contender Kyle Busch, who not only led but dominated the competition, as he so often does.

At the half-way mark of the race, however, Chase Elliott had worked his way forward to claim the 12th position.  He even managed to get past one of his biggest racing idols Tony Stewart.

“He let me go,” Elliott said of his pass around Smoke.

Ever the racer, however, Elliott was hoping for an even better finish.

“On that last restart if we hadn’t have gone three-wide off in Turn One, I think we could have been battling for the win,” Elliott said. “I had a blast. To be able to run with great drivers and I am looking forward to hopefully being able to do it again sometime.”

Elliott also played a role in raising money for several charities, including the Cystic Fibrosis Foundation, St. Jude Children’s Hospital and Children’s Hospital in Richmond. Race founder and winner Denny Hamlin said that 10 percent of this year’s race proceeds will be given to assist the victims of the recent tornados.

While Elliott celebrated his unexpectedly good finish in the Hamlin charity race, he was still smarting a bit from his K&N Pro Series East race prior to the charity event. After a sixth place qualifying effort in the East Series Blue Ox 150, Elliott struggled throughout the bulk of the race.

In addition to the fact that he had never been to the .75 mile, D-shaped oval track at Richmond, he also had to battle a rain delay, as well as a tight No. 9 HendrickCars.com race car. On Lap 75 when the caution flag flew, Elliott had dropped to 14th on the track and came out 25th after a pit stop for a track bar adjustment.

Elliott was never able to advance much further and he finished the race 24th.

“We just need more time to figure these cars out,” Elliott said. “We will get it.”

“I thought the car was good in practice,” Elliott continued. “But we had no drive-up off the corner when it came time for the race.”

Elliott will next compete in the K&N Pro Series East race at Bowman-Gray Stadium in Winston-Salem, North Carolina on June 4th. This will also be the fifteen year old Elliott’s debut at that historic track.