Brothers in Arms: Marines Honored in Richmond for the “Matthew and Daniel Hansen 400” 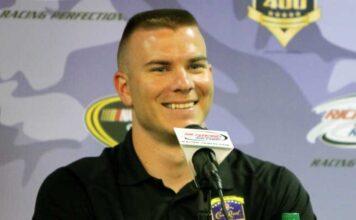 What’s in a name and how does it influence a person’s character?

In the case of Matthew and his twin brother Daniel Hansen, character can be defined as nothing short of heroic. [media-credit name=”Barry Albert ” align=”alignright” width=”266″][/media-credit]

As the grand prize winners of the Crown Royal “Your Name Here” contest, NASCAR, Crown Royal and the Richmond International Raceway recognizes these brothers by naming Saturday night’s Sprint Cup race the “Crown Royal presents the Matthew and Daniel Hansen 400.” Nominated by their godmother, she described in detail Matthew’s unfaltering service to his country during his three tours of duty in Iraq in the United States Marine Corps.

This year marks the second year that Crown Royal has chosen to focus solely on military service members to honor their courageous acts when deciding to name their race.

“This weekend we are proud to honor two American heroes in Matthew and Daniel Hansen,” said Yvonne Briese, Crown Royal Brand Director.  “The kind of bravery and selflessness these men have displayed are the exact traits Crown Royal sought to highlight through the ‘Your Name Here’ program and we could not ask for two better service members to represent this program.”

Matthew and Daniel joined the Marines in 2002, Matthew served in Operation Iraqi Freedom while Daniel was selected to protect President George W. Bush at Camp David in 2004 and later Lieutenant Richard C. Zilmer, USMC while in Iraq. Daniel was killed during a roadside bombing on Feb. 14, 2009 while supporting combat operations in Afghanistan. Despite the loss of his brother, Matthew continues to serve. He is currently serving on a military base in San Marcos due to injury, but hopes to return to duty overseas in the future.

Lieutenant Zilmer, along with Major General Ray Fox, USMC Commanding General of Training and Education Command in Quantico, Va., will be in attendance for Saturday’s nights race to honor not only Daniel and Matthew, but troops worldwide.

“I have a feeling this weekend is going to be full of incredible moments,” said Hansen.  “From experiencing the rush of the race to hanging out with stars like Matt Kenseth and Rodney Atkins, I’m really looking forward to getting to Richmond.  I wish Daniel could share this with me, but he will definitely be in my heart the entire time.”

Thanks in part to Crown Royal and Richmond International Raceway, Matthew Hansen has been given the “royal treatment” all weekend. His name has been incorporated into race merchandise and memorabilia, as well as being included in the actual race broadcast. He will serve as the Grand Marshal, watch the race from Matt Kenseth’s No. 17 pit box and deliver a trophy bearing his name to the winner of the race in Victory Lane.

“It is a privilege to host Matthew as he honors his brother at Richmond International Raceway on April 30,” said Richmond International Raceway president Doug Fritz. “We are thrilled to again team up with Crown Royal for the ‘Your Name Here’ program, recognizing members of our Armed Forces. The Crown Royal Presents the Matthew & Daniel Hansen 400 NASCAR Sprint Cup Series race will be a momentous event at America’s Premier Short Track.”

Country star and Crown Royal partner,  Rodney Atkins will preform an hour long pre-race concert on the front-stretch for ticket holders who are 21 and older to help celebrate the lives of Matthew and his brother Daniel and honor those who proudly serve.

“This weekend’s show in Richmond is going to be a blast,” said Atkins. “Not only do I get to perform for thousands of race fans, but I get to do so for a cause I really believe in – honoring American heroes like Matthew and Daniel Hansen.”

So whether you are here at the track or at home in front of the TV, raise a glass to Matthew and Daniel Hansen, two true American heroes and as always, Please Drink Responsibly.