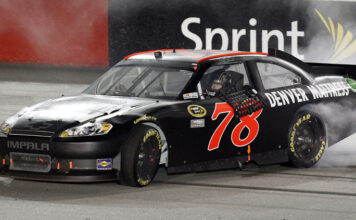 [/media-credit]Honoring one of NASCAR’s most historic race tracks, as well as celebrating their mothers, NASCAR’s most elite drivers battled the track dubbed as “too tough to tame.”

Here is what was surprising and not surprising for the Showtime Southern 500 at Darlington Raceway this Mother’s Day weekend.

Surprising:  With his mother Lee unable to accompany him due to her work with animals impacted by the tornados in Alabama, a most surprised and emotional Regan Smith, driver of the No. 78 Furniture Row Chevrolet, finally got that elusive first Cup win.

Smith led just eleven laps during the race. The 27 year old driver had his fastest lap at the end when it counted, just barely holding off a hard-charging Carl Edwards.

With his voice choking and tears dotting his cheeks, Smith sincerely thanked his crew chief and his team for enabling him to finally achieve his dream to win a race.

“This race is so special and so meaningful,” Smith continued. “We were standing there looking at the names and the faces on the trophy, and you think, ‘My face is going to be there right next to these guys, and it’ll be there forever.’”

Not Surprising:  After attending to the birth of his second child, son Michael, it was not surprising that Carl Edwards, driver of the No. 60 Aflac Ford for Roush Fenway Racing, continued his big week with a runner up finish at Darlington.

“First of all, congratulations to Regan,” Edwards said graciously. “I’m sure that will feel good tomorrow, but right now, I wanted to win that race.”

“I guess if I had to get beat, it’s all right to get beat by him,” Edwards continued. “We’re leading the points so we’ll just go to the next one.”

Surprising: At the track where getting the infamous ‘Darlington stripe’ is more a question of when not if, it was surprising to see the number of problems on pit road instead of on the track.

Several drivers had a tough time getting into their pit stalls, including Dale Earnhardt, Jr., driver of the No. 88 Amp Energy Sugar Free/National Guard Chevrolet, who just nicked the commitment cone coming in for his pit stop.

Martin Truex, Jr., in the No. 56 NAPA Auto Parts Toyota, also had trouble getting to his pit box. Yet Truex was trumped by Paul Menard, driver of the No. 27 Turtle Wax/Menards Chevrolet, who spun into the pits ending up head first into his stall.

Four-time champion Jeff Gordon, this week in his No. 24 Drive to End Hunger Chevrolet, also experienced pit difficulties, dragging his gas man almost out of the pit stall on exit.

His Hendrick Motorsports teammate Jimmie Johnson was unlucky in his pit stall as well, hanging a lug nut on the No. 48 Lowes/Kobalt Tools Chevrolet, and having to return to pit road for repairs.

Not Surprising:  While it was not surprising that the ‘Lady in Black’ brought out the dark side of many drivers’ temperaments, it was Kyle Busch versus Kevin Harvick, rather than Juan Pablo Montoya and Ryan Newman, that took center stage after the race’s overtime finish.

The two tangled dramatically on the track in the waning part of the race, trading pushes and shoves, which then carried over as both tried to make their way to pit road.

Harvick struck first, blocking Busch’s entrance to pit road. Busch tried has best evasive action, going back onto the track and even backing up to get away from the driver of the No. 29 Budweiser Chevrolet.

Unhappy Harvick continued the pursuit, hopping out of his car to confront the driver of the No. 18 Wrigley’s Doublemint Camry. Busch had the last ‘word’, bumping Harvick’s driver-less car into the wall on pit road.

“It was tight racing after the restart there,” Busch said. “I gave him (Harvick) room but he came off the wall and lifted early and then drove in the back of me,”

“It was just uncalled for, just unacceptable racing.”

For his side of the story, Harvick had little to say as he emerged from the NASCAR hauler.

“Obviously, we were just racing hard and doing what we had to do at the end,” Harvick said. “And things happen. That’s it.”

Busch finished the race in eleventh, while Harvick came in 17th. Both drivers held position in the point standings, third and fifth respectively.

Surprising: While Kurt Busch, behind the wheel of the No. 22 Shell/Pennzoil Dodge, continued his struggles, wrecking his primary car during practice and not having much better luck in his back up car during the race, the other half of the Penske duo had a surprisingly good finish.

Piloting the Blue Deuce, Brad Keselowski, mirroring Smith’s decision to stay out on the late caution, had a good run at race end, taking the checkered flag in third.

“To have a chance at it I was going to have to get the first restart and I just wasn’t strong enough to do that,” Keselowski said. “I ended up giving Regan a whale of a push and once he cleared Carl, he was gone.”

“I’m really happy for Regan and wanted to make sure that if I couldn’t win, he would and it looks like it worked out for him and his whole team,” Keselowski continued. “It’s a win for the underdogs tonight.”

Not Surprising: Kasey Kahne, after qualifying his No. 4 Red Bull Toyota on the pole, was strong from the drop of the green flag to the end of the race. Although he led the most laps, Kahne also had a collision with the wall, which relegated him to a fourth place finish.

“We were tight and we had to keep tuning the car up and fixing the car,” Kahne said after the race. “I killed the crush panel so I’m covered in fumes and rubber and stuff.”

“We didn’t finish as good as we should have,” Kahne continued. “But fourth’s good for as hard as I hit the wall.”