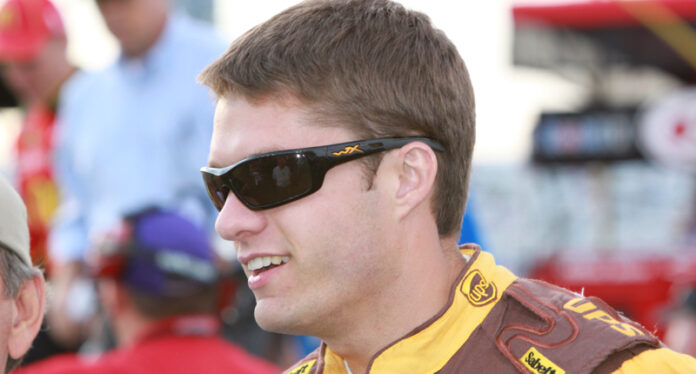 From Trevor Bayne’s win of the Daytona 500 to Regan Smith’s win last weekend at Darlington, Cinderella stories have been all the rage in NASCAR. [/media-credit]One driver who is ready to put on the glass slipper in Victory Lane is David Ragan, driver of the No. 6 UPS Ford for Roush Fenway Racing. In fact, Ragan is indeed planning to be that next big underdog winner.

“Absolutely, I will be the next Cinderella story,” Ragan said. “I feel like we’re in a position to win a race. And if we can get a little more consistent, I think we have a team that can make the Chase.”

“From our practice and qualifying efforts, our races and our pit stops, everything is a couple of notches better than what it was even in the year when we finished 13th in the points,” Ragan continued. “I feel like any weekend we go, we’ve got the attitude to win the race.”

While Ragan may have the winning attitude for that Cinderella finish, he acknowledged that the upcoming race at Dover International Speedway will be a challenge.  In fact, he has one word for the track affectionately known as the Monster Mile and that is “breathtaking.”

Ragan also affirmed that Dover, in addition to earning the nickname ‘Monster Mile’ has also earned its stripes as ‘Bristol on Steroids.’

“If you took Bristol by your hands and stretched it out, you’d have Dover,” Ragan said. “You get a lot of speed and a lot of banking so ‘Bristol on Steroids’ is a good way to describe it.”

“It’s real intimidating the first time you get there,” Ragan continued. “But once you get the hang of it, you actually look forward to it.”

“You go into the corner and it feels like you fall down a story or two and as you get back on the throttle, you’re driving out of the corner,” Ragan said. “It’s a very cool sensation and when you have a fast car, it makes it even more fun.”

In spite of the monster challenges at Dover, Ragan takes solace in the fact that his team, Roush Fenway Racing, has a history of running well there.

“Clearly that’s a track that Roush cars are good at,” Ragan said. “So even in down years, we’ve been good there.”

“The concrete doesn’t change,” Ragan continued. “Dover stays pretty much the same so we’ve got a good set up we can work with, which makes life a lot easier.”

“We haven’t had the finish that we deserved,” Ragan said of his own Dover history. “We’ve had some crazy things happen there, from very bad pit stops under green to being caught up in a wreck or two.”

“So, that’s a testament to how good our new cars are,” Ragan continued. “That gives me some extra confidence that we’re taking the best car we can take to the track.”

“We have a great relationship,” Ragan continued about his crew chief pairing with Blickensderfer. “We’re both pretty young and we’re not afraid to venture out and be aggressive and try some different things on the race cars.”

“Drew and I are both very hungry so we know we are capable of winning and want to make it happen,” Ragan said. “So, we definitely have high hopes this weekend.”

One thing that Ragan wants to avoid happening this weekend is to get caught up in any of the ‘boys have it’ shenanigans that have occurred over the past two race weekends.

“I don’t know if you’ll have the same couple of characters that we’ve had the past few weeks, but Dover is an exciting track and there’s not a lot of give and take there,” Ragan said. “Accidents do happen so I would say that you probably have a good chance of having a little more fireworks this weekend.”

“I haven’t gotten into it with anyone but there’s always the next week,” Ragan said with a chuckle. “We’re just trying to stay focused on our plan and stay out of all that. But if something comes up, we’ll be ready.”

But what David Ragan is most ready for is that first, and to date elusive win, which for him would complete his dream of a Cinderella race weekend.

“Your first win is always special and at a track like Dover, it would be very special to get a win,” Ragan said.

“Regan Smith proved that if you’re in a position to win, it can happen,” Ragan continued. “If we put ourselves in the top five or top ten, anything can happen.”

“I can tell you one thing, there won’t be anybody trying any harder this weekend.”