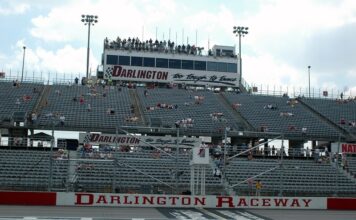 This weekend’s race at Darlington provided a storyline to the viewer that will be talked about for weeks to come.  It was a simple phrase that we have heard several times throughout the year…..”Boys, have at it!” And that, they did!

We saw a sucker punch thrown. Overheard a name-calling shouting match between Kyle Busch and Kevin Harvick’s team. We listened to rumors of a possible punch during a NASCAR meeting between Juan Pablo Montoya and Ryan Newman.

We also saw Montoya accidentally get into the back of Johnson while Montoya’s actions were being scrutinized.  We even got to see a runaway car endangering the lives of NASCAR officials and crew members.

After such an epic event, “Boys have at it!” will have consequences for the first time in 2011.  Those consequences come with a price tag in the form of a penalties.

Let’s take a look at the Top 10 Most Fined Sprint Cup Drivers….. #10. Jeff Gordon, the four-time NASCAR Cup Series winner, finds himself ranked #10 on our most fined list with $126,000 in assessed penalties.

In 2007, Gordon’s car was found to have a fender flare which created an unfair advantage.  This infraction led to the single highest penalty of $100,000 for the team.

Good Boy Gordon did manage to lose his temper and decked Jeff Burton after being wrecked at Texas Motor Speedway in 2010.

Since the two were able to work through their spat, NASCAR did not penalize either driver. #9. Car owner/driver and published author, Michael Waltrip and his team have been fined a minimal $140,500 despite some of his crazy antics.

After initial qualifying for the 2007 Daytona 500,  NASCAR inspectors found evidence in the engine manifold that Waltrip’s team had used an illegal fuel additive.  This became known as the “jet fuel” scandal, costing his team $100,000.

An inappropriate gesture during a television broadcast in 2005 set him back $10,000. #8.  Kurt Busch, winner of NASCAR NEXTEL Cup Series Championship using the “Chase for the Cup” point system, is a bit of a hothead.  Busch and his team have been levied $156,000 in penalties.

Tempers flared after some on-track antics between Kurt Busch and Tony Stewart at Dover in 2007.  Busch ran into Stewart’s car on pit road, barely missing the jack man.

The No. 2 Penske Dodge driver was fined $100,000 for endangering crew members on pit road.

In another on-track scuffle, Busch bumped Robby Gordon’s car from behind, spinning him out and causing a caution to “allegedly” improve his position.  The bump cost Busch $10,000. #7. Some would say that Dale Earnhardt Jr. is a chip off the old block.  Naysayers would argue Jr. has a chip on his shoulder.  With $168,000 in penalties, we will let you decide.

Dale Jr. took a hit when the COT debuted in 2007.  He and other Hendrick teammates were each fined $100,000 for unapproved modifications.

When asked about the significance of his fifth victory at Talladega, Jr. replied,  “It don’t mean s— right now. Daddy’s won here 10 times.”

#6. The No. 56 NAPA Auto Parts Toyota Camry driver, Martin Truex Jr. lands on our Top Ten list at no fault of his own.  Crew Chief, Kevin Manion, has garnered a whopping $175,000 in penalties for the Truex Jr. team.

Manion’s biggest folly came in 2008 when the No. 1 Chevrolet failed a template inspection before the Coke Zero 400. The penalties levied were $100,000 and a six-race suspension. #5. Love him or hate him, Kyle Busch is a force to be reckoned with.  Holding the record for most NASCAR wins in a season between the top three NASCAR series comes with a price…$190,000 in penalties to be exact!

We have all seen the endless replays of the skirmish between “Rowdy” Busch and Kevin Harvick from this weekend’s race at Darlington.  The tiff cost each driver $25,000 and earned them a four-race probation.

Kyle is known for his garish antics.  He was recently penalized $25,000 for giving an obscene gesture to a NASCAR official during a live televised race.

#4. Carl Long holds the record for the single largest penalty handed out by NASCAR at the tune of $200,000.

What could Carl do to cost his team so much money you ask?

After making just 23 career Cup starts and not appearing in a points-paying Cup race since 2006, Long felt he could qualifying for the 2008 All-Star Race and the Daytona 500. Preliminary to the All-Star race at Lowe’s Motor Speedway, Long overheated the engine.  His team made an engine switch.

Under the NASCAR rules, the bad engine was examined.  It was later determined that the engine exceeded the maximum cubic-inch displacement specifications.

In layman’s terms, Long was using an engine that was far bigger than NASCAR allows. #3. NASCAR elite driver and five-time NASCAR Sprint Cup Series winner, Jimmie Johnson, has managed to rack up the fines on his way to supremacy.

Crew Chief, Chad Knaus, aka “Cheating Chad” has earned $202,500 in penalties for the team with his Go Big or Go Home mentality.

Johnson was fined $10,000 for his role in the “Bottlegate” fiasco when he placed a Lowe’s logo in front of some plastic Powerade bottles after he got out of his car in Pocono Raceway’s Victory Lane. #2. When it comes to drama, Kevin Harvick is where it is at!  Don’t get me wrong….I am a proud firesuit- T-shirt wearing fan who loves the Harvicks!  However, I was surprised to find $236,000 in penalties for all that drama.

This weekend, Harvick landed a punch on Kyle Busch through an open window net. This netted Harvick with a $25,000 fine and a four-race probation.

In Kevin’s defense…not all of the $236,000 were fines from altercations.  Harvick’s team had issues with aerodynamics, oil and fuel filters, rear suspension and a few other miscellaneous penalties to the tune of $156,000.

#1. Yes, you read that correctly!  Robby Gordon takes the cake with an whopping $325,000 in NASCAR penalties.

This driver/owner has been fined for just about everything thanks to his never-ending supply of crew chiefs.  Most notably, $150,000 for an unapproved front bumper while under the direction of Frank Kerr.

Robby Gordon remains on probation after an altercation in Las Vegas with Kevin Conway regarding money and pending litigation.

What data was used for this article? We used the Jayski penalties posted from 2001-May 10,2011.  All data is assumed under the umbrella of each driver. Article assumes readers will know a driver name, but not a crew member name.

Example…..If the stated driver’s crew chief was fined $50,000 for unapproved modifications..then that driver’s penalties will reflect that amount.

Where did we get the data?  http://jayski.com/pages/penalties.htm