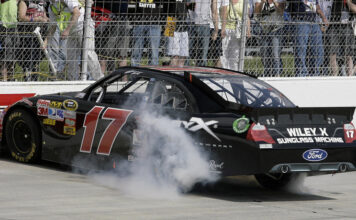 1. Carl Edwards: Edwards posted his fifth straight top-10 finish, and ninth of the year, with a seventh in the Fed Ex 400 at Dover. Edwards led 117 laps, and like Jimmie Johnson, who led 207, took four tires instead of two on the race’s final pit stop, which cost him a chance for the win. Edwards leads the Sprint Cup point standings with a 24-point edge over Jimmie Johnson.

“It appears we were outsmarted by Matt Kenseth,” Edwards said. “Two tires was the right call. I’ve made some regrettable decisions during my career, most involving the Keselowski’s, Kevin Harvick, or the lids to oil coolers, but this one really pains me. Bob Osbourne yelled ‘Four!’ and the No. 99 Aflac Ford ‘ducked,’ out of contention.

“In most cases, Matt’s not known for his bravery, but I have to commend him for such a ‘courageous’ call. I honestly thought with four tires we could catch him. It most cases, when Matt has seen me coming, he’s ran away. This time was no different, except that he ran away, with victory.”

2. Kyle Busch: A week after his near throwdown with Kevin Harvick at Darlington, Busch registered a solid fourth at Dover despite an engine change that rendered him at the rear for the start. With his seventh top 10 of the year, Busch maintained the third spot in the Sprint Cup point standings, and trails Carl Edwards by 37.

“I can’t let a disciplinary ruling from NASCAR get me down,” Busch said. “I went from ‘probation’ to ‘ovation.’ Frankly, I like it better when anyone but Kevin Harvick is giving me ‘a hand.’

“Now, Unlike Joe Gibbs Racing Toyota engines, there’s no ‘quit’ in me. Thankfully, the new engine lasted. It was the ‘little engine that could.’ As for the Gibbs engine department, it’s a case of ‘so little engines that can.’”

3. Jimmie Johnson: Johnson started on the pole at Dover and led the most laps, 207, but his decision to take four tires on the final pit stop proved costly, as several drivers, including eventual winner Matt Kenseth, chose two. Johnson restarted 11th, and could only regain two spots and finished ninth. He remained second in the points, 24 behind Carl Edwards.

“Now that’s what I call ‘championship caliber,’” Johnson said, “but only in that we were right on target in shooting ourselves in the foot.

“Last week, Chad Knaus called Juan Montoya a ‘douchebag.’ Oh how the tables have turned. This time, however, it looks like Chad’s the douchebag, for calling for four tires instead of two. In short, it’s a case of ‘touché, douché.’

“As expected, after last week’s Kyle Busch-Kevin Harvick fiasco, nothing interesting happened at Dover. It went from ‘boor-dom’ to ‘boredom.’” [/media-credit]4. Matt Kenseth: Kenseth opted for two tires on the final pit stop at Dover and led the final 39 laps to win the Fed Ex 400, his second win of the year. On the crucial pit stop, Kenseth overruled crew chief Jimmy Fennig, who wanted four tires, and outsmarted Jimmie Johnson and Carl Edwards, who had shared domination of the race to that point.

“Not to toot my own horn,” Kenseth said, “but that was a gutsy call on my part. People can question my fortitude all they want, but I proved that it takes a ‘pair’ to take ‘two’ in that situation. That’s why I told Fennig to ‘Take two, and call me ‘champ’ in the morning.’”

5. Kevin Harvick: Harvick finished 10th at Dover, posting his sixth top 10 of the year. He remained fifth in the Sprint Cup point standings, and trails Carl Edwards by 54.

“Congratulations to Matt Kenseth on the win,” Harvick said. “Matt is well-liked among other drivers. Ironically, he, like Kyle Busch, deserves everything coming to him.

“NASCAR has ordered me to stay in my car. In other words, I should keep my HANS to myself. As such, I’ve come to appreciate the art of ‘restraint,’ at least until June 15th. I call that date the ‘Ides Of June.’ And Busch should heed the warning to beware the Ides of June. Why is it called the ‘ides?’ Because, if I were Busch, I’d watch my back, and I’d expect some payback,’ and I’d be on the lookout for the Budweiser car.”

6. Dale Earnhardt, Jr.: Earnhardt led one lap at Dover, piloting the No. 88 Amp Energy Sugar Free/National Guard Chevy to a 12th-place finish. His winless streak now sits at 104 races, and Earnhardt admitted that he doesn’t feel a win is close.

“As of now, I’m not eligible to compete in the All Star Race at Charlotte on May 21st since I haven’t won. But even if I don’t win the Sprint Showdown, I fully expect the fans to vote me in. So, I’m appealing to my fans to vote for me, Dale Earnhardt, Jr. I call that ‘cAMPaigning.”

7. Clint Bowyer: Bowyer held the lead when Juan Montoya’s spin brought out the race’s last caution on lap 361, and the No. 33 team’s decision to bolt on four tires seemed to be the right call. But Matt Kenseth took only two and left the pits in second, and soon overtook Mark Martin for the lead. Bowyer settled for sixth, his sixth top-10 finish of the year, and is now ninth in the point standings, 80 out of first.

“I was beyond stunned,” Bowyer said, “that a Montoya spin could involve only him. Of course, I was also shocked that a four-tire stop was not the correct call. Sure, we were wise to put on right-side tires. That is, until we put on the ‘wrong-side’ tires.”

8. Ryan Newman: Newman finished 21st at Dover, two laps down, after struggling with handling issues on a miserable day at the Monster Mile for Stewart Haas Racing. Newman fell one spot in the point standings to seventh, and is now 76 out of first.

“Only one thing went ‘right’ for us at Dover,” Newman said, “and that was Juan Montoya’s No. 42 car, into the wall. That’s two weeks in a row in which someone’s said of Montoya, ‘I bet that left a mark.’ Take it from me. There’s a party-like atmosphere in the NASCAR hauler. Ask Juan. He’ll tell you they even serve ‘punch.’”

9. Mark Martin: While most of the field pitted for tires during Sunday’s final caution, Martin chose to stay out, and that decision gave him the runner-up spot in the Fed Ex 400 at Dover. It was Martin’s best finish of the year and vaulted him three places in the point standings to 11th, 92 out of first.

“How’s that for irony?” Martin said. “Everyone ‘re-tired,’ except me. For once in my life, the decision was easy to ‘stay out.’”

10. Denny Hamlin: Hamlin finished 16th at Dover after battling handling conditions all day, unable to keep his short streak of top-10’s alive. However, he vaulted three places in the Sprint Cup point standings to 13th, 112 out of first.

“I envy Kyle Busch,” Hamlin said. “He’s only got four weeks of probation. I’ve already suffered through a year’s worth of stagnation.

“I’ve been quite entertained by the Busch-Harvick feud. Over the years, I’ve had my disagreements with both of them. Luckily, NASCAR acted quickly and thereby prevented one or both from acting rashly and hurting someone. I think Kyle and Kevin are safe from harm anyway, because both their cars are equipped with drivers-side windbags.”