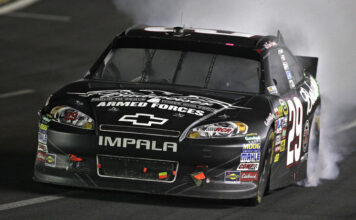 After exceptionally exciting finishes in the Formula One Monaco Grand Prix and the Indianapolis 500 earlier in the day, all signs pointed to a stellar finish in one of NASCAR’s biggest races of the season. Here is what was surprising and not surprising from the Coca Cola 600 at Charlotte Motor Speedway. [/media-credit]Surprising: With several of the sport’s biggest races won by first-timers this season, including Trevor Bayne’s story book win at the Daytona 500 and Regan Smith’s unpredicted win at Darlington, it was a bit surprising that no first time winner stood in Victory Lane after the Coke 600.

One driver, however, came mighty close. David Ragan, who had snagged the Showdown win to make it into the All-Star Race the weekend before, almost pulled off his own Cinderella-like story, falling short of the win by just one position.

Ragan, in his No. 6 UPS “We Love Logistics” Ford, finished second, scoring his highest career finish in the Coca Cola 600.

“We had a strong car all day,” Ragan said. “That’s a finish that we deserved, but we just went about doing it the hard way.”

Not Surprising:  After all those laps and all those miles, it was not surprising to see the Coca Cola 600 come down to a green, white checkered finish. And it was equally unsurprising to see one driver that is becoming well-known for his stealth finishes to come from nowhere and snag another victory.

Kevin Harvick, driver of the No. 29 Budweiser Armed Forces Tribute Chevrolet, did just that to lead the last 400 feet of the race and take the checkered flag for his fifth top 10 and second top five in 21 starts at Charlotte.

“We were lucky,” Harvick said. “It’s nothing against the race track, I just don’t like racing here. But to be in Victory Lane, it says a lot about this Budweiser team.”

“This is a huge accomplishment for us,” Harvick continued, admitting that he had struggled with his car and team throughout the race. “This is a hell of a race to win. We’re going to celebrate it like it’s our last one.”

Surprising:  After leading the race on the final lap, seeing the checkered flag, and then running out of gas, it was surprising how positive Dale Earnhardt, Jr. was after the race. Junior limped to the finish line on fumes to finish seventh in his No. 88 National Guard/AMP Energy Chevrolet.

Echoing his ever upbeat crew chief Steve Letarte, Earnhardt, Jr. said, “I’m disappointed we didn’t win, but if we would’ve won, it would have been a gift.”

Not Surprising: In contrast to the positive, proud vibes in the Dale Jr. camp, it was not surprising that there was a whole lot of swearing going on in his teammate Jimmie Johnson’s camp. In fact, crew chief Chad Knaus dropped the F-bomb on national television when Johnson’s engine expired with just five laps to go in the race.

This was the first engine failure for Hendrick Motorsports this season and it forced Johnson to a 28th place finish in his No. 48 Lowes Summer Salutes Chevrolet. Johnson also fell one spot, from second to third, in the point standings.

Surprising:  Although the Coca Cola 600 is the longest race of the season, it was surprising to see the number of engine failures that occurred. In addition to Jimmie Johnson, Jamie McMurray, Denny Hamlin and Tony Stewart all experienced engine issues.

For Jamie McMurray, behind the wheel of the No. 1 Bass Pro Shop/Convoy of Hope for Earnhardt Ganassi Racing, this engine failure signified the sixth of the season for the ECR engine builders.

“It started shaking and one second later, it was ‘boom,’” McMurray said.

Hamlin, on the other hand, was able to recover after his engine issues, with his No. 11 FedEx Express Toyota team doing a yeoman’s job of changing out the carburetor. Hamlin managed a top ten finish, which boosted him into the top twelve Chase contenders.

Stewart also suffered engine woes in the waning laps of the race, radioing crew chief Darian Grubb that something was amiss with less than 20 laps to go. Stewart, in his No. 14 Office Depot/Mobil 1 Chevrolet, finished 17th, scoring his 10th top-20 finish to date.

Not Surprising:  In addition to engine woes, it was not surprising that many other teams were plagued with other types of mechanical problems, from overheating to radio problems.

Greg Biffle, behind the wheel of the No. 16 3M Ford, seemed ready to implode from overheating issues in his car early in the race. Biffle was, however, able to overcome, rallying back to lead laps at the end. Unfortunately, he too succumbed to not having enough gas, having to make a splash and go stop at the end, which relegated him to a 13th place finish.

Jeff Gordon, piloting the No. 24 Drive to End Hunger Chevrolet, also struggled and battled radio issues early in the race. Gordon too looked strong at the end of the show, only to have to pit for gas as well. Gordon finished 20th, falling two positions to 16th in the point standings.

Surprising:  Serving as a substitute driver for Trevor Bayne and making his Cup debut, it was surprising how well Ricky Stenhouse, Jr. did in the No. 21 Wood Brothers Ford. Stenhouse, Jr. managed to bring his car home in the 11th position even after having several close encounters with the wall.

“That was interesting,” Stenhouse, Jr. said. “I hit the wall a couple of times, the caution came back out and it worked great for us.”

“I’m just glad I got this opportunity.”

Not Surprising:  It was not surprising that after Stenhouse, Jr. and Bayne prayed together before the race, Bayne playfully pushed his friend out of the way and tried to get behind the wheel of his race car. After five weeks of being out of his car due to a mystery illness, Bayne was most certainly chomping at the bit to get back to racing.

Bayne reinforced that desire by tweeting after the race, “This was by far the hardest weekend to sit back and watch! Can’t wait to be back in action!!”

Surprising:  In the battle of the Busch brothers, it was surprising that this weekend Kurt Busch prevailed, finishing fourth in his Shell/Pennzoil No. 22 Dodge, while baby brother Kyle took a wild ride through the grass and then another spin, finishing 32nd in his No. 18 M&Ms Toyota.

“The race was 600 miles and it felt like 800,” Dave Rogers, Busch’s crew chief, said. “Kyle was trying to make something out of nothing and it got away from him. We ended our day a little early.”

Not Surprising:  Not surprisingly, one driver who never expected to even make the show captured the true spirit of the Memorial Day race weekend. David Starr, behind the wheel of the No. 95 Jordan Truck Sales.com Ford Fusion crashed early in the race, finishing 36th. Yet this is what he had to say.

“This was a great weekend,” Starr said. “I’m just honored and blessed to be driving this Ford Fusion.”

“It was awesome out there,” Starr continued. “It was a big honor to race in the Coca Cola 600 even though it ended up like this. I’m really blessed.”