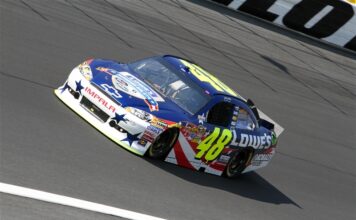 1. Carl Edwards: Edwards, who won the All Star race last week, led 61 laps in the Coca-Cola 600, but late handling problems prevented any chance of a Charlotte sweep. Edwards finished 16th, only his third result out of the top 10 this year, and holds a 36 point lead over Kevin Harvick in the point standings.

“I led 61 of the first 75 laps,” Edwards said, “but I couldn’t finish what I started. That’s opposed to the All Star race, when I finished what I started with, which was an un-wrecked race car. This may be the first time a NASCAR driver has been credited with a ‘ground out.’ Who knew there were speed bumps in the Charlotte infield? Luckily, Charlotte doesn’t have a divot-replacement policy.”

2. Kevin Harvick: Harvick swept past Dale Earnhardt, Jr. in Turn 4 after the No. 88 National Guard Chevy ran out of gas, giving Harvick an unlikely win in the Coca-Cola 600, his third win of the year. Harvick jumped three places in the Sprint Cup point standings, and now trails Carl Edwards by 36 points.

“Whether driving the Budweiser car or drinking a cold can of Bud,” Harvick said, “it’s always nice to see a ‘coaster.’

“Now, Sunday wasn’t a good day for the letters ‘J’ and ‘R.’ First, rookie J.R. Hildebrand crashes on the final turn at Indy and loses the Indianapolis 500. Then, Dale Jr. runs out of gas on the final lap at Charlotte. And both were driving cars sponsored by the National Guard. Now that’s a conspiracy!”

3. Kyle Busch: Busch spun twice at Charlotte, once through the grassy infield on lap 318, then again on lap 343, and the cumulative effect of those mishaps ended his day early. Busch finished 32nd, 55 laps down, and dropped two spots in the point standings to fifth.

“Sunday’s was certainly no joyride,” Busch said. “And speaking of ‘joyrides,’ how is an early finish at Charlotte like a run in with the Iredell County Sheriff’s department? In each case, someone tells you to ‘pull over.’ This is definitely not an incident in which I can plead innocence.” [/media-credit]4. Jimmie Johnson: Johnson’s engine blew on lap 395, sending him to the garage early with his first DNF of the year. He was credited with a 28th-place finish, and dropped one place in the point standings to third, 37 behind Carl Edwards.

“It’s certainly disappointing to post our first DNF of the year,” Johnson said. “Of course, that disappointment is offset by the satisfaction of knowing we haven’t recorded a single ‘DNFF’ in five years. That’s a ‘did not finish first.’

“Clearly, we weren’t at our best. It’s never a good sign when you leave the pits with a wrench on the car. I call that a ‘mistake;’ Chad Knaus calls it a sneaky attempt at a little extra downforce. In any case, we can’t afford to leave wrenches lying unattended. I suspect we’ll need all the tools we have, because I foresee a need to ‘tighten screws’ on this team.”

5. Dale Earnhardt, Jr.: Earnhardt took the lead on lap 399 when Greg Biffle pitted for fuel, and with the finish line in sight two laps later, victory, as well as an end to Junior’s 104-race winless streak, appeared to be at hand. But alas, Earnhardt’s No. 88 Chevrolet sputtered and slowed two corners from the end. Kevin Harvick passed Earnhardt for the win, and Earnhardt settled for a disappointing, yet solid seventh-place.

“As my fuel tank emptied,” Earnhardt said, “so did the hopes of Junior Nation. That’s the first time I can remember ‘E’ getting booed. Usually, I’m accustomed to getting good mileage, at least out of the ‘Earnhardt’ name. But this time, my gas tank let me down. Apparently, my fuel gauge, like me, is subject to unreasonable expectations.”

6. Matt Kenseth: Kenseth boasted the car to beat at Charlotte, leading 103 of 402 laps, but a pit stop for fuel on lap 393 relegated him to a finish of 14th. He fell one spot to seventh in the Sprint Cup point standings, and trails Carl Edwards by 71.

“A lot of drivers,” Kenseth said, “Dale Earnhardt, Jr. included, ‘stopped for gas’ on Sunday. We just happened to do it in the pits. Gas mileage is a very unpredictable aspect of NASCAR racing, but not nearly as unpredictable as NASCAR’s reasoning behind whether or not to throw a caution flag. Personally, I can understand NASCAR’s reasoning for waving a caution just for a beverage can. Clearly, NASCAR spotters, like everyone else, were watching the race on Charlotte’s gigantic high-definition screen, which makes a can look like 40-gallon barrel. Of course, not throwing a caution with two laps to go and Earnhardt leading was equally controversial. NASCAR doesn’t need a big screen to make that call, because Junior is already larger than life.”

7. Clint Bowyer: Bowyer finished 15th in the Coca-Cola 600 as Richard Childress Racing teammate Kevin Harvick took the win in dramatic fashion. Bowyer improved one spot in the point standings to eighth, 80 out of first.

“I’ve got to hand it to Harvick,” Bowyer said. “He’s one lucky S.O.B. Some say he’s more lucky than good. Others say he’s more S.O.B. than lucky. Kevin once famously claimed that Jimmie Johnson had a horseshoe up his rear end. That obviously is no longer true. I think I speak for many drivers when I say to Kevin, ‘Up yours.’”

8. Denny Hamlin: Hamlin ran out of fuel just before the finish at Charlotte, seeing a top-5 finish turn into a 10th-place result. Hamlin improved one place in the point standings to 12th, and trails Carl Edwards by 106.

“As you know,” Hamlin said. “Kyle Busch got busted for speeding last week, doing 128 miles per hour in a 45-mph zone. He was cited by the Iredell County Sheriff’s department for speeding and careless and reckless driving. Interestingly enough, Kyle wasn’t the only one who was ‘booking.’ The officer who made the stop said Kyle had proper identification and was cooperative. Only one thing amazes me more than a person going three times the speed limit, and that is the fact that Kyle Busch, apparently, can be cooperative.”

9. Kurt Busch: Busch gambled on fuel, choosing to stay out late while most cars pitted, and hoping a win or a top-10 finish would be the reward. Busch didn’t win, but his fourth at Charlotte was his best result of the year and ended a string of four finishes outside the top 10. He climbed two places in the point standings to sixth, and trails Carl Edwards by 68.

“This is becoming a weekly habit,” Busch said, “but I’d like to apologize to those who were listening to the No. 22 Shell/Pennzoil radio frequency. I said a word that shocked even myself—it was called a ‘compliment.’ Steve Addington made an astute call to fill the tank on lap 345. For that, Steve wins the Kurt Busch ‘Bleeping Bleeper Of The Week’ Award.

“Let’s not overly condemn my brother Kyle for driving like a maniac on a public road. Lest we forget, this sport was built on moonshiners driving like maniacs with car-loads of white lightning. Just think. If some overzealous sheriff had stopped some mostly-innocent moonshiner for speeding 60 years ago, the course of history could have been changed forever, and this sport would likely be without alcohol sponsorship. We all owe Kyle our gratitude for reminding us where and why this sport started. Besides, Kyle was profiled by the cops. I can relate. The last time I was ‘profiled,’ I had my plastic surgeon take a little off the sides.”

10. Tony Stewart: Stewart was poised for a top-10 finish with a little over 20 laps remaining in the Coca-Cola 600, but engine trouble, and a near miss of Jeff Burton’s spinning car, sent Stewart home with a 17th-place result. Stewart improved one spot in the point standings to ninth, 89 out of first.