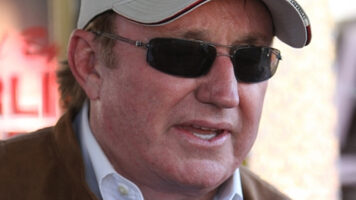 It was reported that Childress grabbed Kyle Busch, administered a headlock and punched him several times about the face. The attack took place in the garage after Saturday’s Camping World Series Truck race.

Shortly after publishing its findings, NASCAR released a statement.

“The penalty we have announced today for Richard Childress reflects NASCAR’s response to the incident at Kansas Speedway on Saturday. We feel this action is appropriate and are confident all parties involved understand our position on this matter and will move forward appropriately.”

Speculation about what provoked the incident centers around Busch and his recent on track aggression towards Childress drivers and equipment.

Busch, already on probation for incidents at Darlington Raceway, was cleared of any wrong doing in the most recent altercation.

Childress, owner of Richard Childress Racing, also released a statement about the altercation.

“First of all, I’m responsible for my actions, plain and simple. As you know, I am a very principled person and have a passion for what we do at Richard Childress Racing. I believe passionately in defending my race teams and my sponsor partners.”

“In this instance, I let that passion and my emotions get the best of me. I accept the penalty NASCAR announced today and, as a company, we will now focus on this week’s races at Pocono Raceway and Texas Motor Speedway.”

Speculation about what provoked the incident centers around Busch and his recent on track aggression towards Childress drivers and equipment.