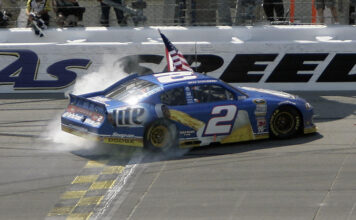 1. Carl Edwards: Edwards posted his series-best tenth top-10 result of the year, placing fifth in the STP 400 at Kansas. He increased his lead in the Sprint Cup point standings, and now leads Jimmie Johnson by 40.

“As temperatures rose,” Edwards said, “the track conditions changed, and we weren’t able to stay on top of those. But, I’ll never complain about finishing fifth, unless it’s in a fight between me, the two Busch brothers, and two girls.

“I consider myself an expert on physical confrontations. But never in a thousand years could I have foreseen a car owner assaulting a driver. Normally, Richard Childress is very calm and level-headed. I’m not sure how that team will respond without the brains of the operation. It seems that RCR has lost its ‘mind.’”

“Like a lot of cars,” Harvick said, “we had handling issues. That’s quite different than the problem Kyle Busch experienced. That was a case of man-handling issues. Richard Childress kicked it old school. And by ‘it,’ I mean Busch’s tail.

“RCR, drivers and owners alike, have declared war on Kyle Busch. It’s a team effort. I got inside Busch’s head; Richard Childress went upside it.”

3. Dale Earnhardt, Jr.: Earnhardt finished second at Kansas, coming up short in a fuel-mileage race for the second straight week. This time, though, Earnhardt’s No. 88 Amp Chevy had the fuel to finish, but so did race winner Brad Keselowski, who held off Earnhardt over the final nine laps. Earnhardt moved up one spot in the point standings to third, trailing Carl Edwards by 41.

“Keselowski made the most of his last stop for fuel,” Earnhardt said. “I knew we had the gas to finish, so all I could do while trailing the No. 2 Miller Lite Dodge was hope for ‘less filling.’ Unfortunately, it didn’t work out. I’m tempted to say ‘You win some, you lose some,’ but only half of that statement would be true.

“To my fans, I can only say ‘Hang it there.’ Junior Nation is experiencing pain at the pump. I strongly advise them to have a taste of a hot new product, Amp Energy Shot, fortified with a blast of penicillin. Hey, you know what they say: ‘What happens in the infield stays, period.’ In the meantime, we’ll keep working hard to unlock the secret to winning, as well as the secret to determining the No. 88 car’s exact mileage.”

4. Jimmie Johnson: Johnson started 31st at Kansas and battled a loose race car for much of the race on Kansas Speedway’s slick surface. Timely adjustments enabled Johnson to battle near the front late in the race, but a late pit stop for fuel set him back before he charged to a finish of seventh. He moved up one spot in the point standings to second and trails Carl Edwards by 40.

“I’m appalled by the Richard Childress-Kyle Busch fiasco. And I think any other driver would feel the same if Chad Knaus attacked a rival driver. Was it a case of ‘butt heads’ or ‘buttheads?’ This kind of thing is certainly not what NASCAR needs, unless they want people to watch. Incidentally, Jerry Springer would make a great Grand Marshall.”

5. Kyle Busch: A day after a heated altercation with Richard Childress, Busch finished 12th in the STP 400 on Sunday. Busch remained fifth in the Sprint Cup point standings and trails Carl Edwards by 60.

“What did NASCAR almost say to Childress after he slugged me on Saturday?” Busch said. “’You’re not in Kansas anymore.’ Alas, Childress was allowed to hang around at the track, where he faced a slightly more enjoyable form of assault: being ‘slapped’ on the back in congratulations.

“Realistically, I should be first in the point standings, because everybody is after me. Childress’ aggression put me in a no-win situation, which happens to always be the situation when a Busch brother fights. If I fight back, I’ll be accused of beating up a senior citizen. If I don’t fight back, I’m a wimp. I either save face or lose face. That’s why, when faced with a physical confrontations, I always do an about face, and turn the other cheek.”

6. Kurt Busch: Busch started from the pole and led 152 of 267 laps, but had to settle for a ninth-place finish after surrendering the lead to pit for fuel with ten laps to go. It was Busch’s second-straight top-10 finish, and he maintained sixth in the point standings, 71 out of first.

“With better fuel mileage,” Busch said, “we could have won the race. I think it’s easy for people to listen to my radio communication and tell how the race is going. In Kansas, the further my fuel gauge strayed from ‘F,’ the closer my language veered to ‘F.’

“I think Richard Childress should have shown a little more restraint. I know that’s hard when dealing with a Busch brother, but Childress should look to Roger Penske for inspiration. Roger’s wanted to punch me for years now, but hasn’t.”

7. Matt Kenseth: Kenseth finished sixth at Kansas, earning his sixth top-10 result of the season. He held on to the seventh spot in the Sprint Cup point standings and trails Carl Edwards by 73.

“If you asked fans to recall their favorite articles involving drivers being bullied,” Kenseth said, “you can be sure my name would appear in a number of the ‘submissions.’”

8. Denny Hamlin: Hamlin posted his fourth-straight top-10 finish, and fifth in the last six races, with a third in the STP 400 at Kansas. He improved one place in the point standings to 11th, 104 out of first, as he continues his gradual climb in the points after a dismal start to the season.

“I dug myself a hole with my early-season performance,” Hamlin said. “But I can’t beat myself up over that. And I sure won’t let Richard Childress do it either. Look at that. I just took a ‘jab’ at Kyle Busch. But who hasn’t?

“Anyway, despite my slow start to the season, I would be a coward if I didn’t choose to fight back. Another jab at Kyle Busch. Kyle’s usually got an answer for everything, except punches.”

9. Tony Stewart: Stewart led twice for 20 laps at Kansas, and was in contention for the win before a late stop for fuel relegated him to an eighth-place finish. The No. 14 Office Depot/Mobil 1 team had trouble filling the tank during a pit stop on lap 212, which necessitated an additional stop. Stewart improved one spot in the point standings to eighth, and now trails Carl Edwards by 92.

“By golly,” Stewart said, “I’m a NASCAR driver. I expect ‘full’ service when I bring my car to the pits.

“As for the Richard Childress-Kyle Busch incident, I warned years ago that NASCAR was descending into a WWE-like atmosphere. It looks like it’s come full circle. We’ve got back flips, championship belts, and owners involved in fights. Vince McMahon would be proud. What’s next? Overpriced pay-per-view offerings for events few people care about?”

10. Clint Bowyer: Bowyer finished 18th in the STP 400, one lap down to the leaders after a race filled with handling issues. More notably, Bowyer won Saturday’s Camping World Truck series O’Reilly Auto Parts 250, a win that was soon overshadowed by the confrontation between Richard Childress and Kyle Busch.