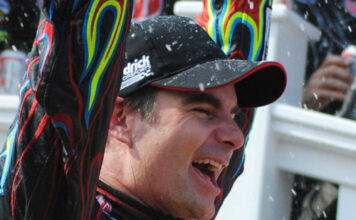 Under threatening skies in Long Pond, PA and after the ARCA race was called for fog the previous day, the Cup Series took the green flag for one of the longer races of the season.

Here is what was surprising and not surprising from the 5-Hour Energy 500 at Pocono Raceway in Long Pond, PA. [/media-credit]Surprising: One of the most surprised at Pocono Raceway was the driver in Victory Lane celebrating his 84th career win, tying the record for third on the all-time NASCAR Spring Cup Series win list, along with Bobby Allison and Darrell Waltrip.

Race winner Jeff Gordon, driver of the No. 24 Dupont Chevrolet for Hendrick Motorsports, also tied NASCAR Champ Bill Elliott for the most series wins at the ‘Tricky Triangle.’

“It’s so amazing because I was so excited about the win and the hard work that Alan (Gustafson) and his guys have been putting into our speedway program or whatever we call these kinds of race tracks, because we struggled on them and I was just so excited to get that win and see what we’ve been working on,” Gordon said.

“So, today to see it all come together, I was so caught up in that,” Gordon continued. “Plus my family was here to celebrate it.”

“I didn’t even think about 84 until they reminded me when I went to do the Speed Channel show Victory Lane,” Gordon said. “And I was like, oh yeah, that’s unbelievable.”

“I really can’t even express in words what it means because I never thought it would happen for me or for anybody.”

Not Surprising:  As expected, he new ability to shift, fuel issues, and problems in the pits all played significant roles in the 5-Hour Energy 500 at Pocono Raceway. Probably most affected was Carl Edwards, the Series point’s leader, who experienced a valve problem that almost caused him to have an engine failure, however, other drivers struggled as well.

While Edwards was able to turn a lap towards the end of the race, the driver of the No. 99 Kellogg/Cheez-It Ford, finished 37th, narrowly maintaining his points lead over Jimmie Johnson by six points.

Another driver Tony Stewart complained bitterly throughout the race about the new-found ability to shift. The driver of the No. 14 Mobil 1/Office Depot Chevrolet finished 21st.

“I just want to thank NASCAR for having us shift about 100 times today,” Stewart said bitterly after losing third gear. “We could have had a good day.”

Kevin Harvick, behind the wheel of the No. 29 Okuma Chevrolet, had fuel issues early in the race, which relegated him to an earlier pit stop strategy than the rest of the field. Harvick was able to redeem himself, however, and finished top-five.

“It was a total team effort to get our Okuma Chevy up there,” Harvick said. “It was a good solid day for us.”

The driver most bit by problems in the pits was Brian Vickers, driver of the No. 83 Red Bull Toyota. Vickers received a speeding penalty and then to make matters worse, sped again as he was serving his penalty.  Vickers finished 22nd.

Surprising:  Although Kyle Busch, driver of the No. 18 M&Ms Toyota, technically finished third, he along with his crew chief Dave Rogers, were surprised during the post-race inspection when their car officially failed.

“It’s a huge surprise,” Rogers said. “I didn’t present anything to tech that hasn’t been through tech before, several times.”

“The car was 1/16th low at the end,” Rogers continued. “NASCAR gives you a range to be in and they give us a yellow range and we exceeded the yellow. We were 1/16th in the red so we were wrong.”

“We have to go back to the shop and figure out why.”

Not Surprising: Kyle’s big brother Kurt, who scored the pole position in his back up No. 22 Shell/Pennzoil Dodge Charger, finished in the runner up position to race winner Gordon.

“It was a great run,” Busch said. “The old boy Jeff Gordon had it in him today. We ran him strong, we ran him hard.”

“We were excited with the finish.”

Surprising:  It was most surprising to see young gun Landon Cassill, behind the wheel of his No. 41 Security Benefit/Thank A Teacher Chevrolet, lead a few laps towards the end of the race.

“We were just trying a little pit strategy to see if we could catch a caution or something,” Cassill said. “It’s cool leading laps in the world’s greatest motorsport so I’m proud of that.”

Not Surprising:  At least two of Jeff Gordon’s other teammates were pretty happy with their run at Pocono Raceway. Old ‘Five Time’ Jimmie Johnson, piloting the No. 48 Lowe’s Chevrolet, finished fourth and NASCAR’S most popular driver, Dale Earnhardt, Jr., in the No. 88 AMP Energy/National Guard Chevrolet, finished sixth.

“It was a great day,” Johnson said. “Our engine package held up today with the abuse we gave it.”

“I’m real happy with where I finished,” Dale Jr. said. “The car was pretty good. I was good with the shifting.”

Surprising:  Yes indeed, most surprising was the fact that Denny Hamlin, who has mastered the ‘Tricky Triangle’ so often, did not win the race. In fact, the driver of the No. 11 FedEx Ground Toyota Camry finished an uncharacteristic 19th.

“We were just coasting there at the beginning and just nothing went really right,” Hamlin said. “We struggled a little bit on pit road, we got a little bit tighter, I felt like the front bump rubbers just gave up, and then when we left pit road, we had a flat tire.”

“When we did that, it sheared the tire and wrapped it around the housing and broke the brake lines so I had no brakes,” Hamlin continued. “It was just a slew of problems there at the end.”

Not Surprising:  To no one’s surprise, newly named crew chief Chad Johnston encouraged his driver, Martin Truex, Jr., behind the wheel of the No. 56 NAPA Auto Parts Toyota, to a top-10 finish.

“That was a hard fought 10th,” Truex, Jr. said. “Chad did a good job of keeping me calm. We were just missing a little and I hope we can find it soon because we’ll have some fun if we do.”

SM Staff
Previous articleWhat Went Down In The 5 Hour Energy 500 at Pocono Raceway
Next articleLooking in the Rearview Mirror: Texas-Pocono