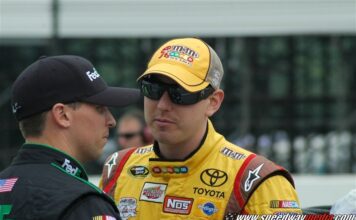 1. Carl Edwards: Edwards dropped a valve 58 laps in to the 5-Hour Energy 500, ending the day early for the No. 99 Kellogg’s/Cheez-It Ford. He finished 37th, by far his worst finish of the year, but remained in front of the  point standings lead, six ahead of Jimmie Johnson.

“I started with eight cylinders,” Edwards said. “Then there were seven. And that led to six, points, that is, in my lead in the Sprint Cup standings. And look who’s behind me. Jimmie Johnson, winner of five Cup championships. He finished fourth on Sunday. I was running third when my valve broke. Johnson is at number two in the standings. I guess that makes him the one to beat.

“You may have seen me in the TNT booth after my engine blew, and it’s clear I’m a natural at broadcasting. Whether behind the wheel or in front of a monitor, I’ve got no problem with ‘exposure,’ which is obviously the case when I’m ‘showing my parts’ on national television.”

2. Jimmie Johnson: Johnson finished a strong fourth at Pocono, posting his fourth top-5 result of the year and taking a chunk out of Carl Edwards points lead. Johnson entered the race 40 behind Edwards; he now trails by only six as the series heads to Michigan.

“As NASCAR’s five time defending champion,” Johnson said, “and arguably the sport’s best driver, I often wonder if I can get any bigger. Well, the answer is ‘yes,’ in Edwards’ rear-view mirror.

“I like my position. I’ve got a rival blowing an engine, and rival’s car owner blowing a gasket. Heck, when the Sprint Cup points leader is in the broadcast booth yucking it up with the TNT crew during the race, I can only consider that a good thing for me and every other driver trailing him. Edwards is a ‘show off.’ He put on a ‘show’ off the track. While it may be good for his broadcast aspirations, as a contender for the Cup, he’s all ‘talk.’”

3. Dale Earnhardt, Jr.: Earnhardt scored his fourth-straight top-10 finish of the year, posting a sixth in the 5-Hour Energy 500 at Pocono, rounding out a trifecta of Hendrick Motorsports cars in the top 10. Jeff Gordon took first, while Jimmie Johnson finished fourth. Earnhardt improved one spot in the point standings to third, and trails Carl Edwards by 10.

“Had the No. 88 Amp Energy Chevrolet won the 5-Hour Energy 500,” Earnhardt said, “there would have been a huge conflict of interest in victory lane. Amp Energy Drink is the industry leader among energy drinks. They play second to no one. I wish I could say the same.

“If we keep running this consistently, the wins will come. 107 races is a long spell to go without a victory, and if I fail to win at Michigan, I’ll then be fighting a three-year victory drought. That’s when Junior Nation becomes ‘Junior Stag-Nation.”

4. Kevin Harvick: Harvick toyed early with RCR nemesis Kyle Busch, drawing a warning from NASCAR, but otherwise took care of business at Pocono, finishing fifth. Harvick held on the fourth in the point standings, and now trails Carl Edwards, who finished 37th, by 11.

“I did indeed try to force Busch down the track on the long straightaway,” Harvick admitted. “I figured Kyle needed a good ‘straight left’ after Richard Childress delivered a ‘straight right’ last week. Of course, Kyle did nothing about it. We’ve all heard of Morgan Freeman ‘Driving Miss Daisy’ around Atlanta. Now you’ve heard of Kevin Harvick ‘Driving Mr. Pansy’ down the track.”

“That’s just great,” Busch said. “One week, I’m decked by Richard Childress. The next, I’m docked by NASCAR. It appears I got ‘served’ by both. According to NASCAR, the left front of the vehicle was 1/16 inch too low, which is outside the tolerance. I’m not surprised, because I’m rarely inside anyone’s tolerance.

“Harvick certainly puts the ‘ass’ in ‘harass.’ He just doesn’t know when to stop. He certainly doesn’t need to fight Richard Childress’ fights for him. Childress can take care of himself just as well as he took care of me. But I have to thank Harvick for teaching me a valuable lesson—that I’m the bigger man.”

6. Kurt Busch: Busch won his second straight pole, topping the charts in Saturday qualifying for the 5-Hour Energy 500. Busch led 37 laps on Sunday, but couldn’t get near Jeff Gordon’s No. 24 down the stretch, and settled for the runner-up spot, his best finish of the year.

“It would have been more fitting,” Busch said, “had Kyle finished second and I finished third. That way, I could have said, for once, that I had Kyle’s back.”

7. Matt Kenseth: Kenseth came home eighth at Pocono, earning his seventh top-10 of the year and fourth in the last five races. He remained seventh in the Sprint Cup point standings, and trails Carl Edwards by 44.

“As you may know, my car was sponsored in part this week by Affliction Clothing, apparel favored by several mixed martial arts fighters and those who emulate them. It’s quite on odd pairing, since I probably rank somewhere between Kyle Busch and a sleeping kitten on the toughness scale. Affliction and I have a unique relationship unlike any other between a sponsor and driver: I’m forbidden to wear the product.”

8. Jeff Gordon: Gordon took charge over the final 50 laps at Pocono, pulling away for his second win this year and 84th career triumph, which tied him with Darrell Waltrip and Bobby Allison for third on the all-time list. Gordon jumped two spots in the point standings to 11th, 81 out of first.

“With the new wildcard berths,” Gordon said, “two wins all but guarantees a spot in the Chase For The Cup. Let this be a warning to everyone: I think this win is a clear indication that a fifth Sprint Cup is not out of the question. That may not have been the case in 2010. Last year, when I vowed to ‘go for 5,’ many assumed I was declaring my allegiance to Jimmie Johnson’s quest for his fifth Cup title.”

9. Denny Hamlin: Hamlin led 76 of the first 101 laps in the 5-Hour Energy 500, but a flat tire on lap 161 ended his dominance and left him scrambling to make up ground over the final 39 laps. He remained on the lead lap and finished 19th, ending a run of three straight top 10’s. Hamlin dropped one spot in the point standings to 12th, 84 out of first.

“The No. 11 Fed Ex Ground Toyota had the field covered,” Hamlin said, “until the flat tire ruined my day. But that didn’t stop me from quoting emerging color commentary personality Carl Edwards when I said to my crew, ‘It’s air time!’

10. Clint Bowyer: Bowyer, who won The Prelude To The Dream last Wednesday, finished 16th at Pocono, struggling with handling on the two-mile tri-oval. Bowyer did, however, improve one spot to eighth in the point standings, and now is 73 out of first.

“My name may be ‘Clint,’” Bowyer said, “but I am by no means ‘The Enforcer.’ That would be Kevin Harvick, who, like our boss Richard Childress, takes matters into his own hands. Harvick has an uncanny ability to get into any driver’s head. According to Kevin, it’s particularly easy to get into Kyle Busch’s head, because there’s so much room.”