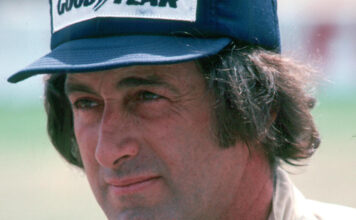 On Tuesday, June 14, 2011, the NASCAR Hall of Fame announced the 2012 class of inductees. Richard “Richie” Evans was named as part of this new class and joins fellow legends Cale Yarborough, Darrell Waltrip, Dale Inman and Glen Wood as part of an elite group. [/media-credit]For those who only follow the Sprint Cup Series, his name may be unfamiliar. But a close look at his record makes it immediately obvious why he was included in such a prestigious class.

Evans won nine National Modified Championships, including eight consecutive championships from 1978 to 1985. His eight straight championships still stand as a record in any NASCAR division to date.  He has been hailed as the best to ever drive the asphalt modified circuit.

During his career he won more than 400 feature races and over 30 track championships. One of his best seasons was in 1979 when Evans ran 60 races capturing 54 top five finishes that included 37 victories.

The International Motorsports Hall of Fame lists his achievements as “one of the supreme accomplishments in motorsports.”

Evan’s left his father’s farm at the age of 16 to work in a garage in Rome, New York.  He soon ventured into the world of racing as a drag racer but eventually switched to stock cars. In 1965 he began running in the Modified division.

Evans was not only a gifted driver but often spent 100 hours a week working on his own cars, leaving nothing to chance.

“Working with the car and working on it in the garage every week is an advantage,” Evans once said. “While I’m working on the car, I’m thinking about every lap I rode in that thing. It’s not like the mechanic who stood and watched it during the feature and then has to make some decisions.”

Nicknamed the “Rapid Roman,” Evans won his first NASCAR Modified Championship in 1973 at the age of 32. He won his second title in 1978 and continued his reign as “king” of the modified division through 1985.

Evans was a winner in more ways than one.  He won the Most Popular Driver award nine times and was highly regarded by even the competitors he raced against each week. He was well known for his down to earth manner and his willingness to help others.

In the eyes of his fans, Evans was a true star.

Once before a race at Daytona, Paul Newman was sitting next to Richie Evans on the pit wall talking when a seven year old boy spotted his favorite driver. He walked over to the pair and when he got there, Paul Newman said “I don’t give autographs.”  The boy innocently answered, “I wanted Richie’s autograph.” Evans just smiled and gave the boy his autograph.

Richie Evans never competed in the highest levels of NASCAR.  But don’t make the mistake of thinking that this meant he wasn’t good enough. Richie Evans was, and still remains, one of the best racers in any NASCAR division.

In 2010, Tommy Baldwin and Steve Park teamed up to race a Richie Evans tribute car at Daytona to pay their respects to this legendary driver.

“Having Richie Evans along for the ride for this weekend and honoring him is something special to all of us,” said Baldwin, “especially in the NASCAR short track community around the country.  Richie was somebody we all looked up to and when he came to town, we knew we had to beat him to win.  He made us all work harder and I think that prepared a lot of us for the Sprint Cup level.”

Evans had already clinched his last championship when tragedy struck. On October 24, 1985, Evans was killed during a practice session in a crash at Martinsville Speedway.  A heartbroken racing community mourned the death of one of their own.

Tony Siscone, a fellow modified racer, summed up the shock and sorrow that many were feeling.

“Good old Richie just did it to us again. He left under his own conditions and lived his life on his own terms.”

Thanks to Area Auto Racing News and allthatmatters.org for quotes.

Angela Campbell
A native of Charlotte, NC, Angela (Angie) was first introduced to racing by her father. An avid fan of NASCAR, she found a way to combine her love of racing with her passion for writing. Angie is also an award-winning member of the National Motorsports Press Association. Follow her on Twitter @angiecampbell_ for the latest NASCAR news and feature stories.
Previous article
Lally looking for a ‘Heluva Good!’ run at Michigan
Next article
Earnhardt Jr’s rumblings during his winless streak