For Toyota, the Bad News Keeps on Coming 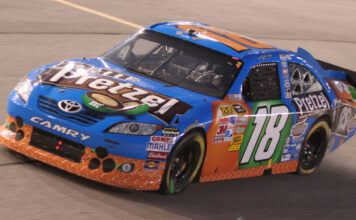 One doesn’t have to look hard to find story lines during the 2011 NASCAR Sprint Cup and Nationwide Series season. The stories are everywhere. Perhaps the story of the Joe Gibbs Racing team ranks at the top of the list. It has been a strange season for the Toyota team headed by the former NFL coach. [/media-credit]First came driver Kyle Busch’s battles with Kevin Harvick that resulted in suspensions, and then the “fight.” Who knows what Richard Childress was thinking when he got Busch in a headlock and began punching him. Everyone knows that Jack Roush and many others feel the same way about the younger Busch, but to lower himself to actually physically attacking the young driver? There had to be a full moon that day.

Then came last week’s “oil pan gate” scandal, and it’s just too much.

The story is that the three Gibbs cars came to Michigan last weekend with unapproved oil pans. That may seem like a minor offense, but not to NASCAR. With all the talk this week about how it could offer the Gibbs teams a competitive advantage, you could say that it’s not been a fun month at JGR. Even Denny Hamlin’s win at Michigan was overshadowed by the oil pan story.

Add to that the rumor that Carl Edwards was talking to JGR about signing with the team for a fourth car, “if the rest of his teams approved and a proper sponsor could be found.” Add to that the praising of Ford, its vehicles, its CFO, and everything Ford in victory lane on Saturday and after the Cup race on Sunday. Old Joe and JR must have barfed.

But the Toyota camp had more to worry about with the news on Monday. In a report by the Associated Press’ Jenna Fryer and others (followed by an official non-announcement late Monday afternoon), it appears that Red Bull, who owns the two Sprint Cup Toyota’s driven by Brian Vickers and Kasey Kahne, may be leaving the sport. While many are wringing their hands over this move, it’s no secret that the Red Bull team has had little success during their short time in the series. Since 2007, Red Bull only has one victory, that by Brian Vickers at Michigan. One of the original teams Toyota brought to Sprint Cup, it seems that they have come to the end of the road, leaving JGR as the only successful Toyota team in NASCAR’s premier series (yes, Michael Waltrip Racing has won a couple of races). With money in the sport not plentiful, and the seats for drivers scarce, you have to wonder what it means to both JGR, MWR, and even Brian Vickers. Silly Season might be a dandy this year.

With Gibbs having its severe problems and the demise of Red Bull Racing, many traditionalists (and heck, maybe even Jack Roush) are almost giddy. Toyota is already dominating the Nationwide Series and has been near-dominating the truck series, and it rubs many the wrong way. This is a small victory for those of that ilk, but kids, just remember this. Toyota is a worthy adversary. The Japanese manufacturer isn’t dead yet, no matter how bad it looks.

Ron Fleshmanhttp://www.ris-news.com
Ron Fleshman has followed NASCAR racing since attending his first race at Martinsville Speedway in 1964. He joined the Motor Sports Forum on the CompuServe network in the 1980s and became a reporter for Racing Information Systems in 1994. In 2002, he was named NASCAR Editor for RIS when it appeared on the World Wide Web as www.motorsportsforum.com. He can now be found at www.ris-news.com. Ron is a member of the American Auto Racing Writers and Broadcasters Association. You can find Ron following and reporting on the top three NASCAR divisions each week. As a lifer in his support of racing, he attends and reports on nearly 30 events a year and as a member of the motor sports media, his passion has been racing for 47 years. He lives with his family in rural West Virginia and works in the insurance industry when not on the road to another track.
Previous article
NOTES FROM THE NASCAR NATION: IT’S BEEN A VERY EXPENSIVE WEEK FOR THE COACH
Next article
Red Bull’s Jay Frye Speaks Out About Future of Team to The Media