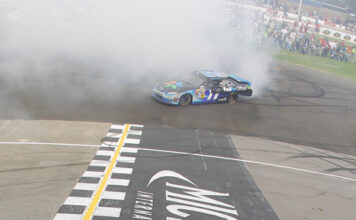 [/media-credit]“How does it feel to lead with nine laps to go and not win the race?” Edwards asked. “It’s the pits. My No. 99 Roush Fenway Ford was adorned with the Aflac ‘Now Hiring’ paint scheme, which hopefully served as a not-too-subtle hint to my crew members of the fleetingness of employment.”

Now, as a driver for Roush Fenway, baseball and racing go together like Joe Gibbs Racing and cheating. From personal experience, I know an illegal oil can part when I see one. ‘Oil Can’ Boyd once roamed Fenway Park. ‘Oil Can Ployed’ makes its home at JGR.”

2. Kyle Busch: An eventful week for Busch ended on Sunday with a solid third-place finish in the Heluva Good! Sour Cream Dips 400 at Michigan. Busch’s probation ended last Tuesday, then the Joe Gibbs Racing fleet was ordered by NASCAR to change oil pans on Friday. On Sunday, Busch fought an indigestion problem before crew chief Dave Rogers rectified it with Tums and water. Busch improved one spot in the point standings, and trails Carl Edwards by 29.

“My No. 18 hauler was parked beside Kevin Harvick’s No. 29 hauler. That was risky, because even our haulers are feuding. I’m guessing NASCAR thinks a parking lot is the only place these two teams can get ‘along.’ But seriously, it looks as though NASCAR is sending us mixed signals. It appears probation was NASCAR’s way of saying ‘no more.’ This must be their method of asking for ‘more.’ I rate NASCAR’s disciplinary methods an ‘A’ for ‘ambiguity.’ Let me say, though, there was a lot of glaring going on between the two teams. I believe that’s the first time Harvick and I have seen eye to eye.”

3. Kevin Harvick: Harvick came home 14th at Michigan, struggling with handling issues and surviving  in the Heluva Good! 400. However, due to subpar days from Jimmie Johnson and Dale Earnhardt, Jr., Harvick vaulted two places in the point standings to second, and now trails Carl Edwards by 20 points.

“See,” Harvick said, “I can revel in the misery of someone besides Kyle Busch. And I will continue to pester Busch without end. You would never hear me complain of heartburn. I’ve got a foolproof immunity to heartburn. It’s called being heartless.”

4. Dale Earnhardt, Jr.: Earnhardt finished 21st at Michigan, seeing a possible top-10 result fall to the wayside when his No. 88 Amp Energy Chevrolet was pinched into the wall on lap 191 when Mark Martin got loose and slid up the track. The contact caused a tire rub that ended Earnhardt’s charge to the front. He remained third in the point standings, 27 out of first.

“It’s hard to stay mad at Mark,” Earnhardt said. “That’s why my crew and I held a ‘re-tire-ment’ party in the pits shortly after he sent me into the wall. At Mark’s last retirement party, I asked him to ‘stay in touch.’ Apparently, he took that a bit too literally. Now, unfortunately, he has to deal with the wrath of Junior Nation. The first rule of Junior Nation is: ‘If you ‘turn against’ the No. 88, regardless of circumstances, Junior Nation will ‘turn against’ you.”

Despite it all, I still expect Mark and I to remain professional and work together. We’ve got lots of information to share. Mark’s finished second in the Sprint Cup rankings four times, so he’s got a wealth of advice to share about ‘not winning.’”

5. Jimmie Johnson: An early spin on lap 8 foreshadowed a tough day for the No. 48 Lowe’s team at Michigan. A broken sway bar was found to be the culprit, and Johnson fell down two laps quickly after racing without the necessary equipment. A scarcity of yellow flags left the team with little opportunity for repairs, and Johnson finished 27th, one lap down. He tumbled three spots in the point standings to fifth, and trails Carl Edwards by 29.

“As the five-time Sprint Cup champion,” Johnson said, “I normally advocate the ‘if it ain’t broke, don’t fix it’ philosophy. Not in this case. A broken sway bar sent me for a loop. And even the sport’s most notorious ‘spin’ doctor, Chad Knaus, couldn’t put it back together. Chad’s and the No. 48 strategists often have cram sessions to find ways to skirt NASCAR’s nebulous rules. We call those meetings ‘unapproved part-ies.”

6. Matt Kenseth: Kenseth chased Denny Hamlin down the stretch at Michigan, but came up short after a last-gasp effort in the final turn. Kenseth spun his tires on the final restart, but got a boost from Roush Fenway teammate Carl Edwards, but pushed him to clean air. He got close to Hamlin, but lost by .281 seconds. Kenseth improved one spot to sixth in the point standings, and trails Edwards by 41.

“Kudos to NASCAR officials,” Kenseth said. “They did something that I couldn’t—‘catch’ Hamlin. I now know why the Joe Gibbs cars had to go back to their old oil pans—because the new ones were ‘busted.’ In any case, Hamlin applauded me for my efforts with the same words NASCAR uttered to the Gibbs team—‘nice try.’”

7. Denny Hamlin: Hamlin won the race out of the pits during the final caution at Michigan, and repelled the advances of Matt Kenseth over the final laps. Hamlin’s narrow victory was his first of the season, and quite fulfilling in the wake of recent strong runs in which victory eluded him. He jumped three places in the point standings to ninth, and is 77 out of first.

“Due to my slow start this season,” Hamlin said, “many people had written me off as a championship contender. To them, I say the same thing I told NASCAR inspectors last Friday: ‘It was an honest mistake.’ NASCAR’s fined the three JGR crew chiefs $50,000. That’s chump change, and not nearly enough to cause the ‘Great Oil Pan-ic of 2011.’”

8. Kurt Busch: Busch finished 11th at Michigan after earning his third consecutive pole, just missing his fourth-straight top-10 result. He improved one spot in the point standings to seventh, and is now 41 out of first.

“Even with an 11th-place finish,” Busch said, “I’m still not happy. I’m a habitual complainer. My crew chief Steve Addington will vouch for that. Tums may shut my brother Kyle up, but there’s not a product made that will stop my whining.”

Despite my qualifying efforts, I’m still winless on the year. That, as well as my reputation as the most-punched driver in NASCAR, indicates that I’m unable to finish what I ‘started.’”

“Amid all the fighting, probations, and unapproved car parts,” Newman said, “I’ve quietly ascended to No. 8 in the point standings. Just like my fine for punching a fellow driver, you could say I’m flying under the radar.”

10. Jeff Gordon: Gordon was running seventh when Dale Earnhardt, Jr. hit the wall, bringing out the race’s final caution at Michigan. Gordon opted for four tires, which set him back to 15th for the restart. He lost two positions in the remaining five laps and finished 17th.

“Obviously, two tires was the right call,” Gordon said. “We just made the ‘right’ call twice. And, as the saying goes, two ‘rights’ make a wrong.”