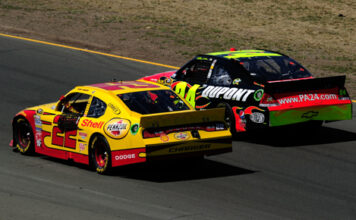 [/media-credit]1. Carl Edwards: Edwards, who skipped Saturday’s Nationwide race in Wisconsin, finished third in the Toyota/Save Mart 350, posting his best ever finish at Sonoma. Edwards increased his lead in the point standings, and now leads Kevin Harvick by 25.

“I knew it would be wise to stay and concentrate on Sonoma,” Edwards said. “And Jack Roush was in agreement. In fact, he’s been begging me to ‘stay’ for weeks now. I’m in my final year of my contract with Roush Fenway Racing. If I don’t get the money I deserve, then Roush Fenway will hear me say what you’d expect the guy who’s led the points standings nearly all year say: ‘Watch me go.’”

2. Kevin Harvick: Harvick started 26th at Sonoma and recovered from a mid-race accident before fighting his way to a finish of ninth, taking his ninth top-10 finish of the year. He remained second in the point standings, and trails Carl Edwards by 25.

“But the No. 29 Richard Childress Chevrolet wasn’t the only thing ‘reamed’ at Sonoma. There was lot of ‘bad blood’ out there, and I’m not talking about the bonds of kinship that link those blasted Busch brothers. Tony Stewart and Brian Vickers smacked each other around, leaving the rear of Stewart’s No. 14 elevated on a tire barrier. Vickers may hear from NASCAR about that. If so, it will be the first time a driver will be fined for another car’s rear end being too high.”

3. Kyle Busch: Busch finished a solid 11th in the Toyota/Save Mart 350 as big brother Kurt drove to a decisive victory. Kyle fell one spot to fifth in the point standings, 37 behind Carl Edwards.

“For once this year,” Busch said, “Kurt drove like a maniac instead of acting like one. The No. 22 Penske Dodge was unstoppable out front. I’m sure Kurt appreciated the clean air on the track as much as his team appreciated the ‘clean air’ on their radio frequency. Understandably, the ‘curse’ of Kurt Busch can only be lifted by a win.

“As for my finish, I’m satisfied. Or, to put it in terms that are rarely spoken by either of the Busch brothers, ‘I can’t complain.’”

“I enjoy racing in ‘Wine Country,’” Johnson said. “Someday, like Jeff Gordon, I hope to offer my own brand of fine wines, produced at my winery that will be called ‘Wynasty.’

5. Dale Earnhardt, Jr.: Earnhardt was one of seven cars collected in a lap 37 pile-up started when Tony Stewart spun Brian Vickers in Turn 11. The damage left a hole in the radiator of the No. 88 Amp Energy/National Guard Chevrolet was serious, and Earnhardt limped home with his first DNF of the year, finishing 41st.

“What caused our downfall?” Earnhardt asked. “Was it a hole, or a-holes? Hopefully, that’s the end of my involvement in the Tony Stewart-Brian Vickers feud. I though Red Bull was leaving NASCAR. Apparently, not without a fight.”

“That was a major butt-whupping,” Busch said, “and I agree with everyone who’s been saying that’s exactly what I’ve needed this year. Hopefully, this will be a harbinger of more good things to come. We’ve been wildly inconsistent this year. It’s been either tirade or parade.

“I’d like to thank my team for their hard work and perseverance. I believe they wanted this even more than I did. Not a win, mind you, but something that would finally shut me up.”

7. Jeff Gordon: Gordon stayed on the track during a caution with 20 laps to go, going from 20th to 8th before a dash to the checkers that gave him the runner-up finish at Sonoma. It was Gordon’s third top-5 finish in the last five races, and boosted him three spots in the point standings to ninth.

“I’m pleased with our finish here,” Gordon said. “But I have to admit, I had a lot more fun racing Kurt Busch last year as opposed to Sunday. I got a big kick, as well as a big punt, from being behind Kurt last year.”

8. Matt Kenseth: Kenseth was running 13th, up from his qualifying position of 26th, on lap 65 when he was tagged from behind by Joey Logano in the No. 20 Home Depot car. The spin dropped Kenseth back to 35th, and he gamely battled back to finish 14th. He remained sixth in the Sprint Cup point standings, 52 out of first.

“Not only was Logano’s move childish,” Kenseth said, “it was also child-ish. As such, and given my non-confrontational style, I shall handle the situation with ‘kid gloves.’”

9. Denny Hamlin: Hamlin was rear-ended by A.J. Allmendinger’s No. 43 Ford on lap 43, the contact from which was later determined to have damaged the track bar on Hamlin’s No. 11 Fed Ex Freight Toyota. Hamlin resigned to the garage for repairs and finished 37th, completing only 99 of 110 laps.

“We had the car to challenge Kurt Busch,” Hamlin said. “That is, until the bottom fell out, so to speak. Allmendinger may drive for Richard Petty, but his actions on Sunday surely weren’t fit for a king. In fact, A.J. is ‘STuPid.’ There was a lot of talk about road course ringers, but no one warned me about road course ‘Dingers.’ So Allmendinger gets the road course finger.”

10. Clint Bowyer: Bowyer finished fourth at Sonoma, posting his third top-5 finish this year. It was Bowyer’s best result this year, and he improved two places in the Sprint Cup point standings to eight.

“As you know,” Bowyer said, “my RCR teammate Jeff Burton will be taking NFL star Chad Ochocinco for some laps around Atlanta Motor Speedway on Thursday. Hopefully, this ride will last more than the 1.5 second bull ride Ochocinco took earlier this year. I think Jeff is really looking forward to this, and I expect he’ll get a lot from the experience, but not a word in edgewise.”