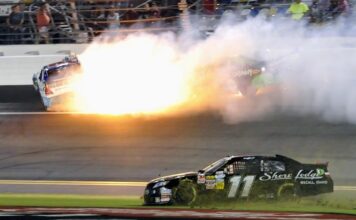 Joey Logano finally found victory lane in a restrictor plate race after being the man who pushed the eventual winners the last few plate races. His victory in the 10th annual Subway Jalapeño 250 at Daytona International Speedway came after a wild race in which he had to start in the rear of the field.

The green flag flew Friday night over four Kevin Harvick Inc. cars who qualified in the first four positions. The race though wasn’t about big packs as it quickly became a race of two-by-two with drivers finding partners and pairing up.

It took only 27 laps for the first caution to come out as Logano spun in turn three following the first bump drafting gone bad incident of the night. He would restart at the rear of the field after pitting before pit road was open, Logano would also have to battle back from a loose wheel.

Throughout the middle portion of the race an interesting leader emerged. Working with Tony Stewart the bright green No. 7 of Danica Patrick repeatedly found her way to the front of the field. Patrick led the field on five different occasions for 13 laps. [/media-credit]of the night flew after Ricky Carmichael lost a left rear tire and hit the backstretch wall. Carmichael would be done for the evening but Danny Efland who also spun was able to continue on.

In what is quickly becoming a trend this season, Kenny Wallace became the newest driver penalized for changing lanes before the start/finish line. Wallace would serve a pass through penalty but recovered for a seventh place finish.

The third caution of the night came from a hard hit by Eric McClure. Drafting with his teammate Mike Bliss, McClure was hooked heading into turn one and hit the wall head on. McClure was taken to a local hospital for tests but is said to be doing fine.

As drivers like Patrick, Stewart and others flexed their muscles, a driver who could have been a contender for the win wouldn’t be around to see it. With less than 25 laps to go Clint Bowyer was hooked by his team owner/teammate Kevin Harvick, sending him head on into the backstretch wall. His race was done for the evening.

As the race for the win started to heat up the sixth and final caution of the night gave everyone a breather after teammates Joe Nemechek and Kevin Conway scraped the turn three wall. It would set up a seven-lap fight to the finish.

Sadler and Stewart would lead on the restart but with five laps to go it was Patrick back out in front with her drafting partner Aric Almirola. Looking to pull off an improbable win, Patrick and Almirola started driving away but were swallowed up by the field with three laps to go.

As the white flag flew though it would be the Joe Gibbs Racing duo of Logano and Kyle Busch who charged through the field. Logano and Busch fought to the checkered flag with the Turner Motorsports teammates of Jason Leffler and Reed Sorenson jumping in between. Logano held off Leffler, Sorenson and Busch for his ninth career Nationwide Series win.

But behind him carnage was breaking out. Patrick, Stewart, Steven Wallace, Mike Wallace and others wrecked coming to the finish line. All would be OK but lost their top five finishes.

The night though, belonged to Joey Logano and the Joe Gibbs Racing team. Logano captured his first win of the 2011 season and his first at Daytona. He only led one lap. Reed Sorenson remains the point leader as his lead increased over Elliott Sadler. Sorenson also captured an extra $100,000 in the “Dash 4 Cash” program.