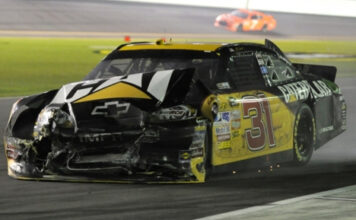 Debates started last year about the likability of two by two racing that is now occurring at both Daytona and Talladega on the NASCAR superspeedway circuit. Some tolerate it and others despise it, particularly fan favorite Dale Earnhardt, Jr., who has taken to calling it “foolish racing.” [/media-credit]So, what can NASCAR do about this kind of racing? While the sanctioning body could follow Jack Roush’s advice to “fix the front and the back of the car so if they have contact, there is an inclined angle that would drive the rear wheels off the ground to stop it,” there are indeed some other possibilities.

Here are ten ways that NASCAR could improve the two by two racing that has become the norm at restrictor plate tracks.

10.  Since some have dubbed the style “Noah’s Ark racing”, with the two by twoing like the animals trudging onto the ark before the flood, NASCAR should definitely have the drivers come out two by two for driver introductions.

Most drivers acknowledge that they have already paired up prior to the event. But just in case the fans are not aware of the duos, NASCAR could really spice up the driver intros by having them come out in their pairings, one in front and one behind, to build suspense as to who is partnering with whom. Then the drivers could separate for the big ‘tandem reveal.’

Better yet, instead of some of those cheesy driver intro stagings where drivers come out to wild music or crazy drumming, NASCAR could literally build an ark and have the tandem pairings appear together out of that.

NASCAR may just have to keep the drumming for that style driver introduction or at least consult with Humpy Wheeler, retired track promoter extraordinaire, for some suitable side effects.

9.  Since one of the biggest complaints regarding tandem racing is the inability of driver of the push car to see, NASCAR should encourage a new activity for the fans in the Fan Zone, that of making cardboard periscopes.

Fans could make the periscopes as a fun-filled race day activity and the best fan concoction could be presented to each pushing driver at driver introductions.

Just in case NASCAR needs some advice on how to build these cardboard up periscopes, here is a helpful link: http://www.instructables.com/id/Cardboard-Periscope/.

8.  Again, since NASCAR is trying to engage new fans in the racing experience, another fan promotion could be encouraged at tandem race tracks, that of honorary pit crew stenciler.

One of the biggest issues that has now evolved with this form of racing is that the manufacturer’s brand name is being rubbed off the front and back bumpers of the race cars.  To solve that concern, each manufacturer could have a fan contest to select fans that could very quickly, in 13 seconds or less, stencil the names back on the cars during the pit stops.

This would not only encourage brand identity, but would also get the fans involved in a whole different aspect of the sport.  And there would be no better way than brand stenciling to get up close and personal with the race team.

7.  Speaking of brand identity, while this may not make the racing any more exciting but to appeal to the adult fans in the crowd, NASCAR may just have to invite one of its primary sponsors, RJ Reynolds Tobacco Company, back to the track for a special cigarette promotion.  After all, the ‘friends with benefits’ type racing may just necessitate a bit of a short smoke break after the intense on-the-track coupling experiences.

6.  NASCAR may also need to make a change to address the fact that there is inherently an odd number of cars on the track, with 43 starters.

So, to increase interest, the last car qualified in should get to select a car from outside the field with whom to partner. Just think how interesting this past weekend’s race could have been if Joe Nemechek had selected say Kyle Petty or Rusty Wallace or even better yet Danica Patrick as his wing person.

5.  In the interest of interest as well as safety, it would also behoove NASCAR to install the back up beeping devices in every race car. In this way, fans at the track and at home would hear the beep, beep, beeping and immediately know who is backing up in the field to find their tandem partners.

Not only can fans and announcers alike track the cars going forward, but all could keep track of those purposefully dragging their brakes to find the second half of their particular dynamic duo throughout the race and especially on those fateful restarts.

4.  Another way to involve the fans that NASCAR should consider for this style of racing is to allow a lucky fan at home to do the spotting for their particular race tandem. This would eliminate the wacky practice of having the pushee driver in the front’s spotter take over the spotting duties for the tandem.

Heck, most of the drivers were confused anyway about who was in their ears from the perches high above on the spotters’ stand so one more weird voice should not be too disconcerting. And it would most certainly liven up the action for all stuck at home unable to attend the race for whatever reason.

3.  Since the two car tandem style of racing has also been compared to the tango, NASCAR should insist that the dancing pairs perform at least one dip together below the yellow line at some point during the race.  Additional points toward the Chase may also be awarded for style, control, and degree of difficulty of the dance by visiting NASCAR officials of the day Carrie Ann Inaba, Len Goodman and Bruno Toniolli.

2.  One of the most intriguing ways that NASCAR could make the tandem racing more interesting is to utilize the now defunct qualifying draw to select a very special surprise.

Just as in days of old, the driver, crew chief or team designee would need to visit the NASCAR spinning ball area outside of the famed NASCAR hauler to select their number.

But instead of determining the qualifying order, a random number will be designated for that the one special team that will get super glue instead of Vaseline or Pam on their car on the very last pit stop of the race.

Won’t that be an interesting twist for whoever decides to hook up with that particular car at the tail end of an upcoming Daytona or Talladega race?

1.  The final way that NASCAR could make the tandem racing more interesting is to approach it all strictly as the square dance that it truly is. Each tandem racing pair should be instructed prior to the race to carefully monitor the NASCAR channel for their calling instructions.

Drivers will be instructed to “Circle Left, Come Down the Middle, and Do Sa Do.” But the best part will be when NASCAR, sometime during the race but hopefully in the second green, white, checkered attempt, will call “Partner Trade” and the cars will have to scramble to find a whole new partner for the race finale.

Oh, but that already happened this past race weekend, didn’t it?

God bless tandem racing and God bless NASCAR.  See you next in Talladega!